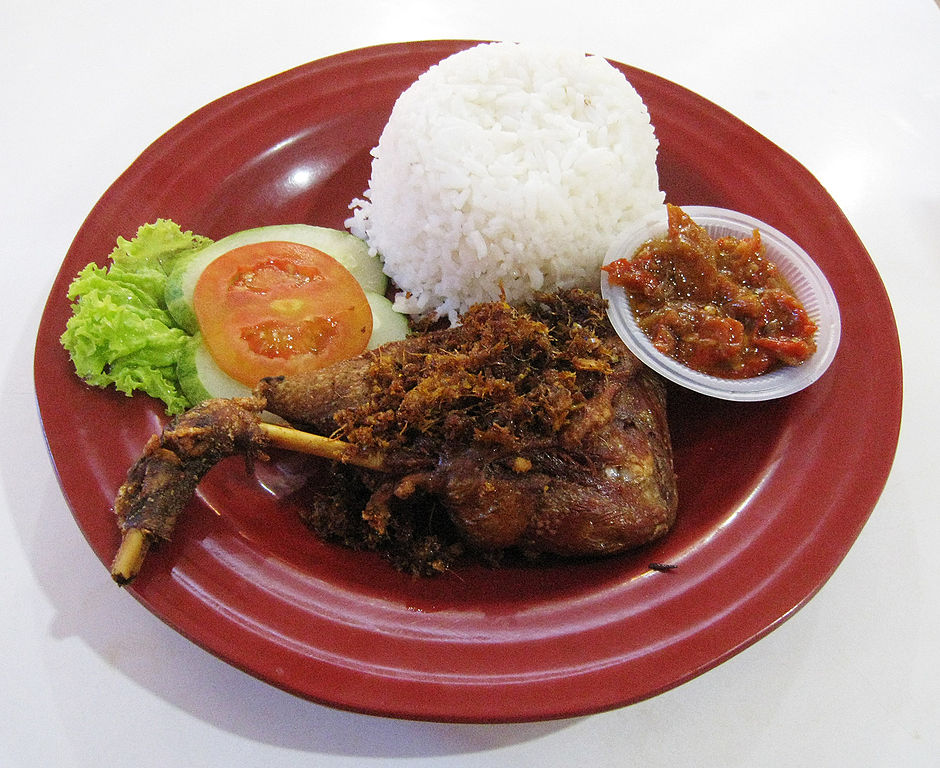 I wrote a blog post two months ago about the impending Mount Agung volcano eruption in Bali, Indonesia. Now it has happened and the Bali looks deserted with the closure of airports and along with it, the tourist inflow is only a trickle now. All the major hotels and restaurants have closed leaving the people living in Bali and the tourists to eat the Bali Street Foods.

By street food, I mean the local food. Every city in any country is known for a few special foods; it may be just a burger or a soft drink or it may even be a soup. Such local foods are prepared using locally available ingredients such as fish, red meat, vegetables, herbs, and spices. They are served both in high-end restaurants and roadside eating outlets.Sometimes, a particular local specialty will taste much better in a street-side restaurant than in a posh joint. It is the food quality that matters and not where you eat it-right?

Let us browse through some of the delicious street foods in Bali that have satisfied even the choosy gourmet travelers.

Majority of Bali’s most renowned dishes contain local herbs and spices that include:

Indonesia is known for its colorful Hindu festivals. If you happen to be in Bali during one of the art festivals, you can try several Bali street foods.

Though, Indonesia’s population is mostly Muslim who do not eat pork, it is cooked in restaurants of other religious people. Such warungs are hard to find but it is worth hunting for it. Balinese cuisine is known to contain Bobi guling, a dish made of baby pigs. 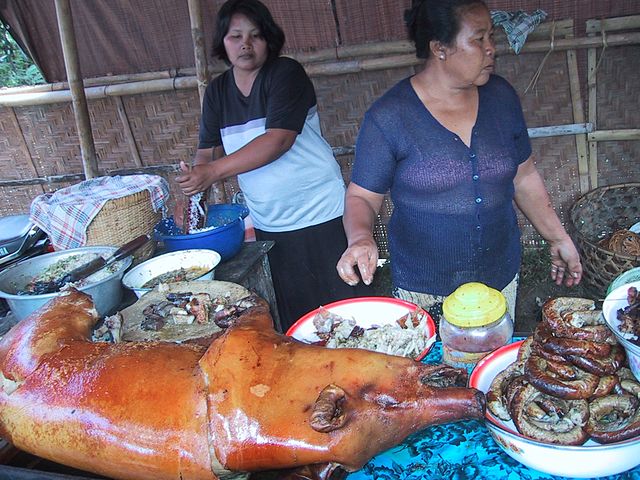 In simple words, it is a whole pig roast, barbequed to perfection using herbs such as turmeric, ginger, and garlic. Some restaurants also use lemongrass and bay leaf (salam leaf) for added flavor.

When the local people feast during festivals, a whole pig is eaten from nose to tail. This Bali street food is a rage among local residents.

It is also a meat dish, either chicken or a duck based one and is cooked with a generous dose of spices. Either of the bird is marinated for long in a spicy paste, wrapped in a banana leaf and cooked in an oven heated by wood. 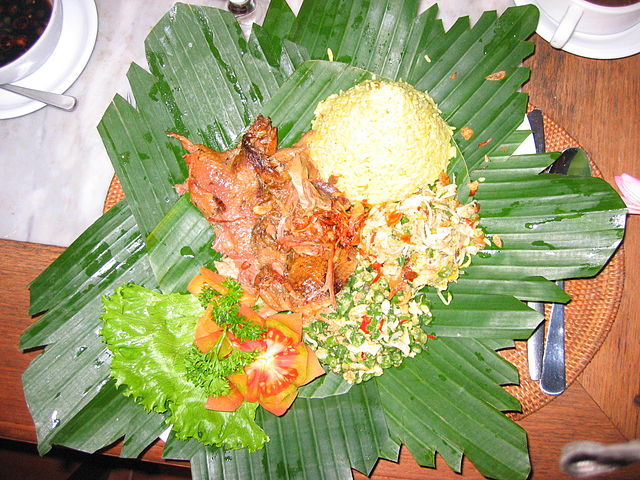 It’s a slow cooking process that extends up to 6 hours!. OMG. then, when can you order?

Other ingredients in Bebek betutu are:

However, the wait is worth as the final product is juicy and succulent. People eat this Bali street food with rice and vegetables with relish.

Sate (satay) is basically a grilled meat and served as a kabab using lemongrass stem. What an innovation! The meat can be pork, beef, chicken or a turtle. 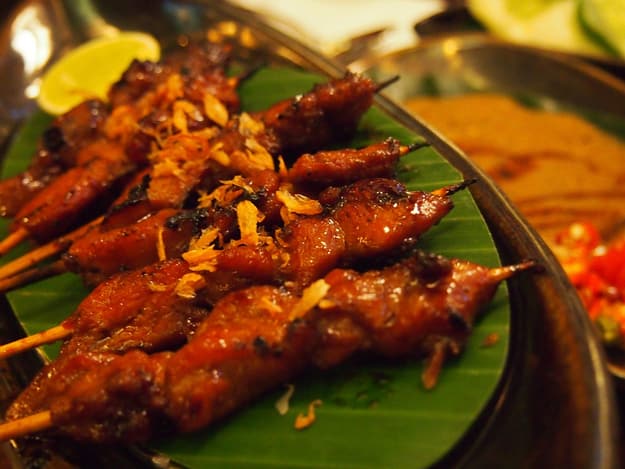 This Bali street food is cooked more like a Kerala type using coconut milk and black pepper. Like a Vietnamese cuisine, the marinated meat is then applied on a bamboo (sometimes sugarcane) stick and then barbequed over a bed of charcoal. It is called Sate Lilit.

It’s a very popular Balinese food and is available with every street food vendor as well as in high-end restaurants.

You are served the sate lilit with a bowl of sambal; every bite of the sate is dipped in the sambal before eating.

Ah, the Indonesian name can be difficult to pronounce as well as to gauge about what it is. Nasi Goreng (sounds a bit German to me) is nothing but the usual fried rice but contains Indonesian herbs and spices of which the lemongrass is predominant. 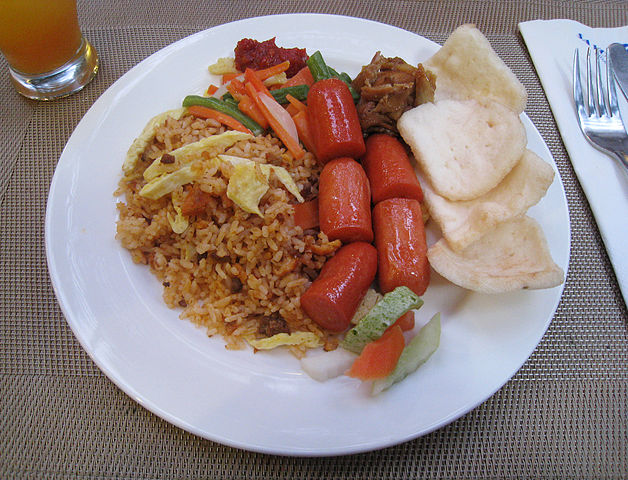 This is very much a street food in almost every Asian country now; only the accompaniments vary. In Bali, it is eaten with sweet soy sauce that is known as ‘kecap manis’ in Indonesia. The rice used is a long grain variety. Red chilly is used instead of green chilly. This Bali street food plate is garnished with cucumber and tomato slices and prawn chips (crackers). 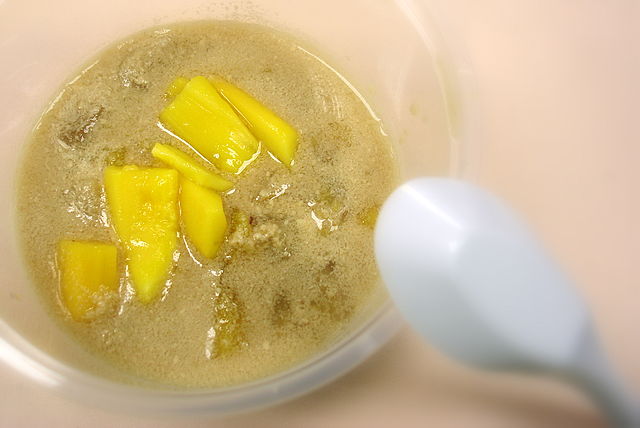 Now, I have come to the desserts section. Kolak is a sweet made of cassava, banana, sweet potato and pumpkin. All these are finely grated and cooked in coconut milk mixed with palm candy. I think a slightly different variant of this is found in Kerala, India.

Not very sweet but still tastes good but I would not put it under the ‘desserts’ section. A ripe banana is dipped in a besan paste and deep fried. It is then served with strawberry jam. Sounds like truncated Indian fritter-right? 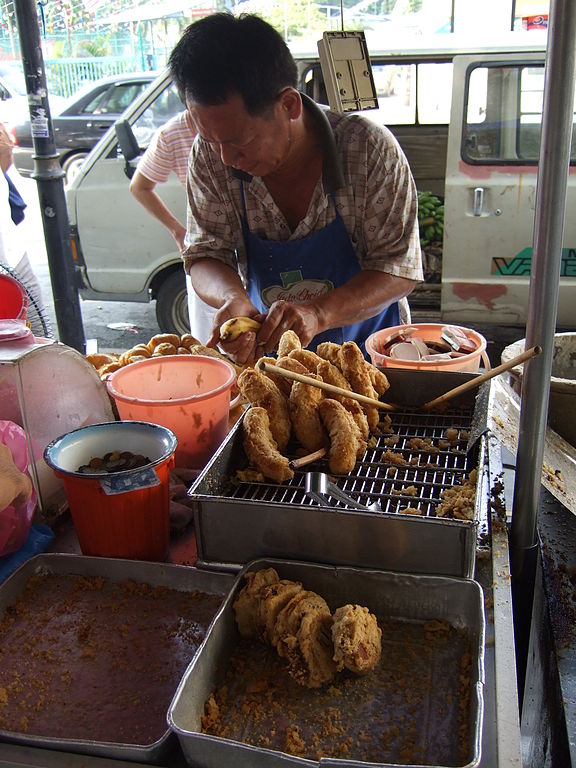 From the ease of making it, it certainly is a street food and widely available in every street corner in Bali.

Can’t gauge what is it-eh? It is a rice cake. Rice is made into a flour after grinding (or using a ready-made rice flour), mixed with tapioca starch and a thick batter is made with water and steam cooked or fried to get a cake. It is then served with brown sugar sauce. 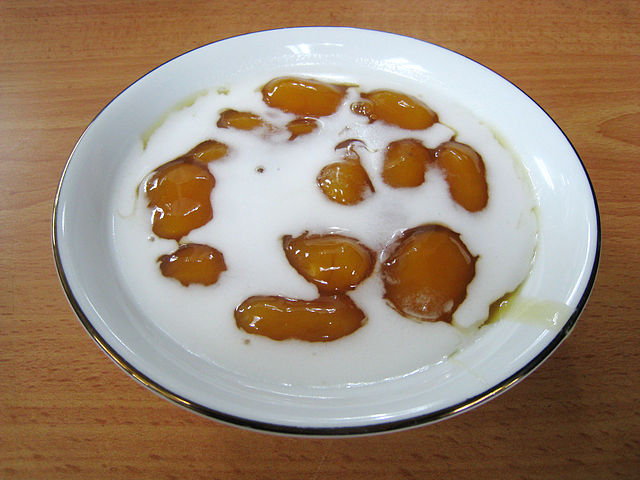 I believe with the volcano on and the hotels shut down, the Bali street food vendors are capitalizing the opportunity.

How to reach Bali?

Indonesia is well connected by air from all the continents. Bali, a province of Indonesia has its capital at Denpasar. There is an international airport called Ngurah Rai International Airport. It is rated as the 7th best airport in the world and is a very one too because of large number of tourist traffic from the United States and Europe.

Apart from the Indonesia’s own airline Garuda Indonesia, other airlines that are seen carrying passengers are:

Bali’s port is also a busy one as most of the South East Asian cruises make a compulsory stop at Bali. Cruises originate from Singapore, Malaysia, Java, and Sumatra.

Solution to Food Poisoning While Traveling

8 Tallest Waterfalls in the World Based...