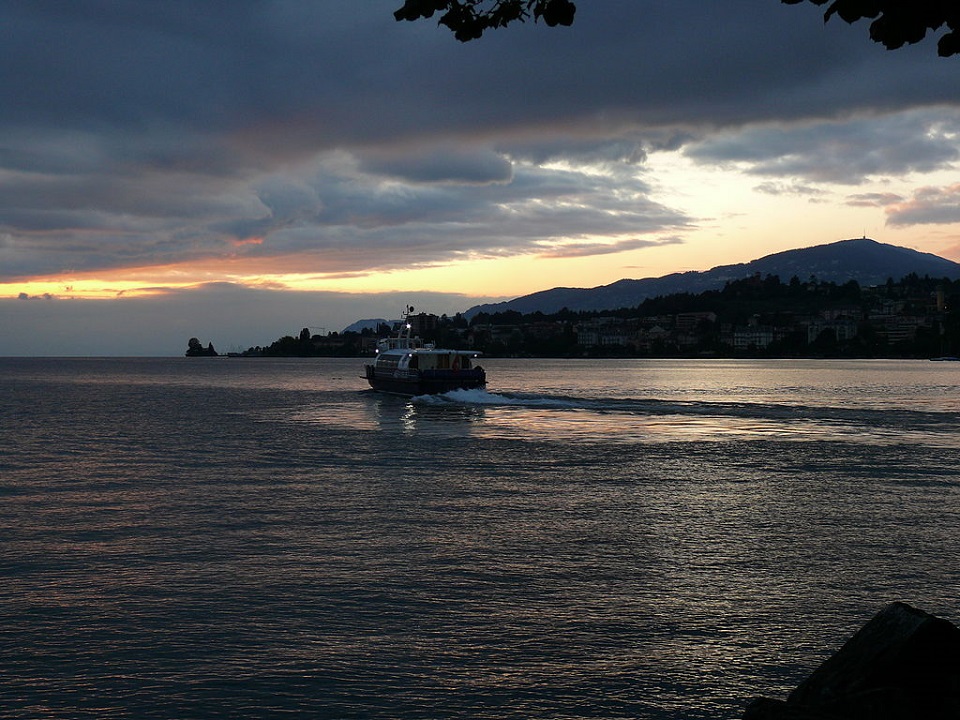 Lakes too emit a smell similar to sea; only the smell of a freshwater lakes are more pleasant than the smell of the salty sea. Tourists who go out of the way to visit places of natural beauties would prefer to camp at a lake shore than getting lodged up in a concrete box. Next only to Canada, Switzerland has more lakes in the world.

While the Canadian lakes scare us with their size, Swiss lakes beckon us with their calmness and the mountainous landscape that surrounds them. If you happen to go on a train journey in the Swiss Alps, the beautiful lakes that pass by would beg you to stop the train midway and walk towards them. Let us pay a visit to some of the exquisite looking lakes in Switzerland.

Switzerland is a tourist-friendly country. There are plenty of hotels and cottages in and around the Swiss lakes and boating is a predominant activity on the lakes.

When I read that that this lake’s depth is 800 plus feet, I felt myself backing away mentally. Depth scares me like hell. However, when I read that the lake’s shores touch three countries namely Austria and Germany apart from Switzerland, I very much want to take a boat cruise on this big lake that draws water from the romantic Rhine River. If only the boat takes me along the lake Constance’s length (63 km) and breadth, I can boast of touching the soil of three European countries in a matter of a couple of hours! 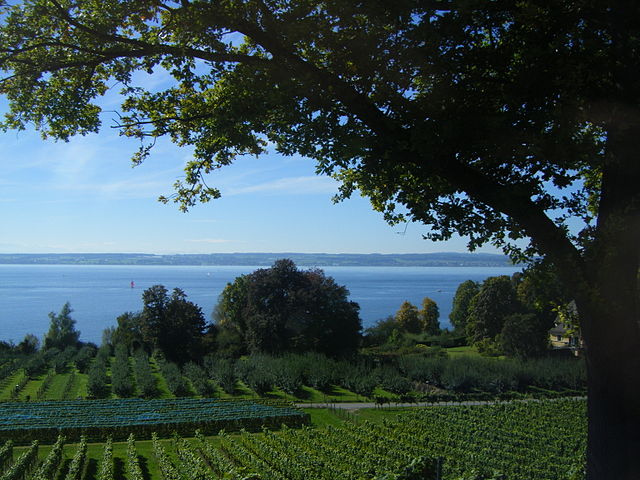 Being a very popular tourist destination, several resorts have come up to serve the tourists who indulge in water sports such as boating, sailing, and windsurfing. The circumference of the Lake Constance is 260 km that bikers go around enjoying the scenic surrounding.

To go to Lake Constance, you can take a train from Zurich railway station and the journey time is only an hour.

From Zurich (75 km): rail connection every hour to Constance (1 hour) 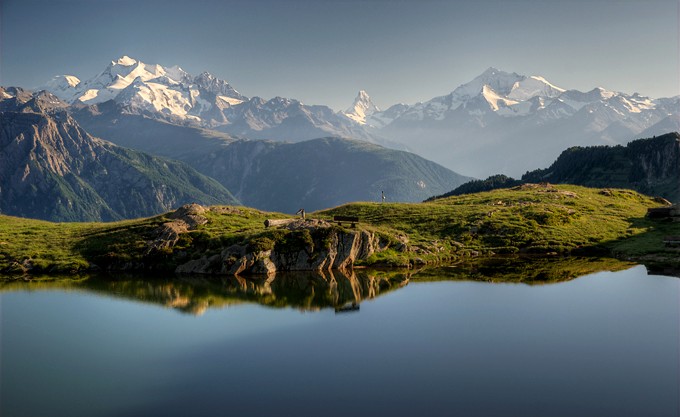 I would call this lake a friendly one because it has a maximum depth of only 13 feet! However, its location is at a height of 9045 feet in the Riffelhorn Mountains, at a small town called Zermatt which also happens to be a ski resort. Naturally, all the visitors to the resort also go and see the Riffelsee lake. Its water capacity is quite huge with 49 acres of catchment area.

This lake can be reached from a small mountain railway station called Rotenboden.

This is a unique blue water lake in the sense; it draws water from subterranean springs which mean the lake’s bed is full of water that surfaces due to natural pressure. 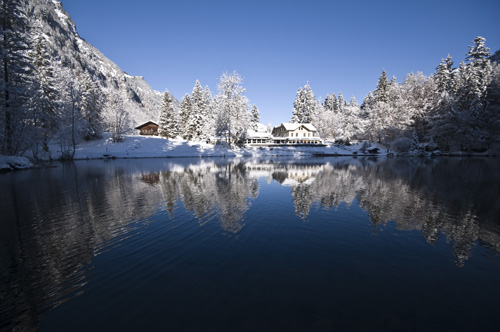 Lake Blausee is a small lake measuring only 1.58 acres and the maximum depth is only 33 feet. It is located in the Kander valley at an altitude of nearly 3000 feet. Tourists to the Blausee Nature Park are treated to this lovely and charming lake that is situated in a lush green forest.

Reaching the lake Blausee is time-consuming as it is situated in a remote forest area. Swiss tourists’ one of popular sightseeing places is Interlaken, which is located in the Bernese Oberland mountains and people love this place for its alpine meadows, dense forests, skiing trails. From Interlaken, lake Blausee is reached first traveling by train up to Kandersteg and then by bus to reach the destination.

Oh, here is one more natural lake in Switzerland that is high up on the mountain at an elevation of about 7400 feet. It is a fairly large lake measuring approximately 20 acres and its maximum depth is 49 feet. 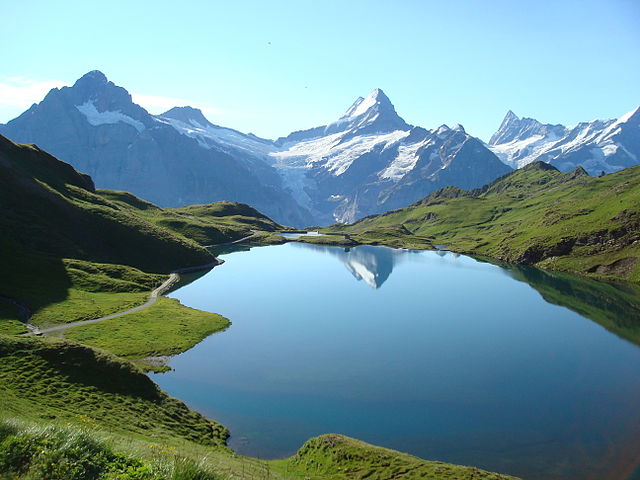 Nearby is a well-known ski resort called Grindelwald in the Bernese Alps. Lake Bachalspee is surrounded by snow-clad mountains in the winter and you can see a gentle ripple created by mountain breeze on the blue waters. A natural dam divides the lake into two. The lake and the area surrounding it look serene and peaceful. It is an ideal picnic spot on the green meadows.

From any observation point, Lake Geneva looks stunning. The surrounding hills, the castle on the shore and proximity of France make this holiday spot a must-visit attraction. 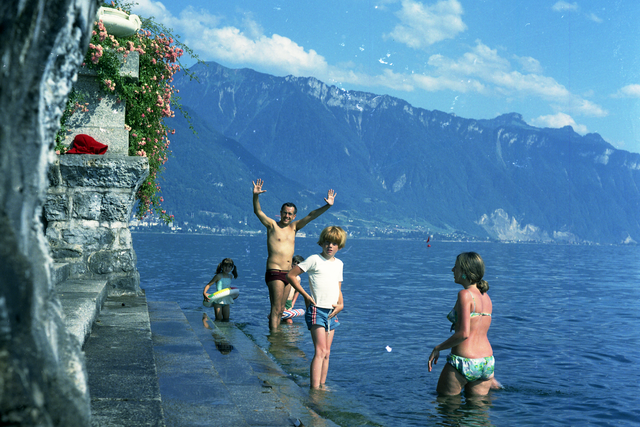 Lake Geneva is said to be the largest lake in Switzerland measuring an area of 580 sq.km. The length alone is 73 km. I think a relaxed boat ride on this picturesque lake will be exhilarating. People instantly fall in love with the surroundings. When the sun shines gloriously through the tall trees, the entire area becomes very colorful. 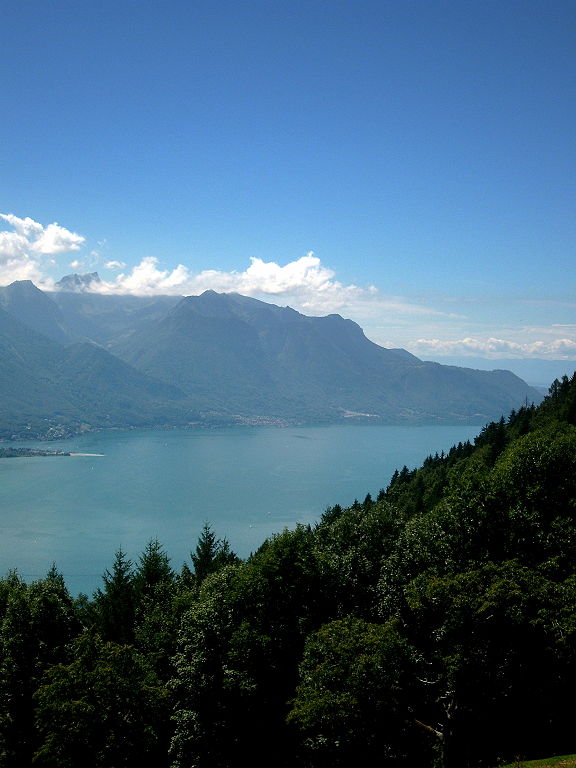 Being close to the Geneva city itself, there are hundreds of tourists at any given time of the year. To engage the crowd, there are a lot of adventure activities in and around the lake such as horseback riding, skiing, parasailing, ice fishing, boating, snowmobiling, and even zip lining. The last mentioned adventure must be thrilling as you slide across the metal rope over Lake Geneva and the lush green meadows below.

How to reach Lake Geneva

There is no dearth of flights to Geneva international airport from every major country in the Europe and U.K. There are connecting trains to the Gare de Cornavin (the Geneva Railway station) from the Geneva airport. After stopping at the Geneva railway station, the train further goes to Lausanne passing by the Geneva Lake station.

I believe there are seven more lakes in Switzerland that are worth writing about. I will cover them later.