The Forts and Beautiful Beaches in Alibaug near Mumbai 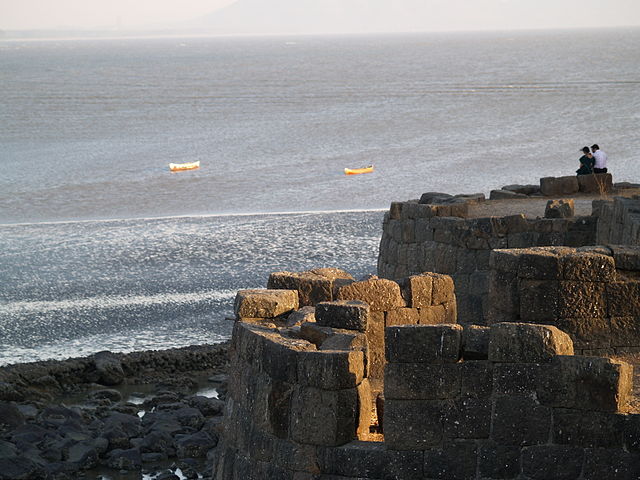 This blog post “The Forts and beautiful Beaches in Alibaug near Mumbai” covers several beautiful beaches of Alibaug and some of the ancient historical forts that are located near Alibaug.

To be more useful to you, I have given information about several accommodations for your weekend stay that includes beachfront resorts.

Alibaug is a big tourist destination for no reason. Being close to Mumbai city, India’s largest visited city for several purposes is only 95 km to its north. Alibaug is more of an outpost of Mumbai considering superb connectivity by road, sea and rail.

There are stunning beaches in Alibaug which itself is a coastal city on the Arabian Sea. For the beach loving people of Mumbai, Goa was the only alternative several years ago.

Now, Alibaug after its stupendous infrastructure development and increased connectivity, the people of Mumbai have started going to Alibaug for their weekend holiday.

In addition, they bring their tourists to Alibag(another name of Alibaug) who are pleased that the beaches in Alibaug are much less crowded.

Moreover, the staying options in Alibaug are affordable when compared to highly expensive Mumbai hotels. Being a small town, even the food is very cheap in Alibaug.

Apart from beautiful beaches, there are a couple of historical monuments in Alibaug that are worth visiting such as Kolaba Fort and Korlai Fort. During your Alibaug trip, you can also visit a few popular temples.

Trains to Alibaug from Mumbai.

The nearest railway station to Alibaug is Panvel that is served well by the Konkan Railways. 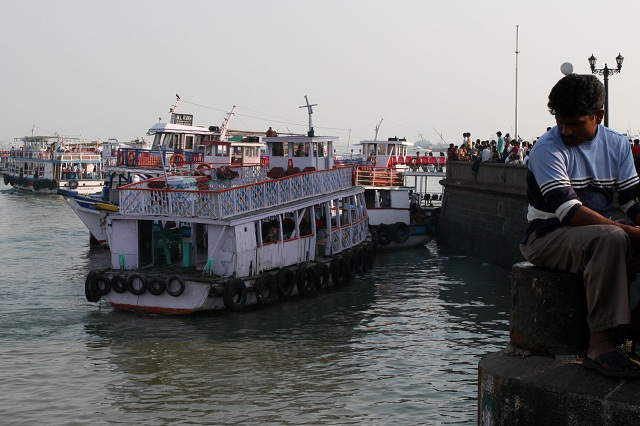 From the Mumbai’s Gateway of India, several ferries and speedboats ply transporting passengers to Mandawa jetty. The running time is about an hour. Once you reach Mandwa dockyard, you can hire any private taxi and reach Alibaug in 20 minutes.

The most beautiful beaches in Alibag.

If you browse the web, you will come to know of 10 beaches in Alibaug that are usually shown to visitors by the locals as well as any tour operator based in Alibaug or Mumbai.

Let us visit some of the stunning and beautiful beaches in Alibaug.

Do you know that beautiful beaches in Alibaug wear black sand?

Did you notice how precariously the passengers hold on to the boat? Yes, it is risky but exciting. After all, it is an adventure sport, folks!

Adventure Sports at Beaches in Alibaug

Parasailing is one of the most loved water sports by daring youth, though, this water sport is very safe and anyone irrespective of their age can participate. Watch this short video clip of parasailing in Alibaug Beach.

I am sure no further textual explanation is necessary to explain jet skiing. I think this watercraft is called ‘water scooter’ on Goan beaches.

If you have dived deep into the sea, beaches in Alibaug are an ideal place to learn it from the expert trainers in Alibaug.

You have seen the speedboats in films, usually a boat chase scene. They move really fast with upturned hull giving you feeling as if you are gliding on the water. Wonderful experience.

This is similar to speedboat riding. The only difference between the two here is your boat (sometimes an inflatable bed ) with a group of people is being towed by a speedboat. This still gives you all the thrills of riding on a speedboat. Beaches in Alibaug have a few operators of ‘Bumper Ride’ water sports.

Below is one more video showing the excitement of a bumper ride on sea. This is more thrilling than the previous video.

See, so many water sports in beaches in Alibaug near Mumbai for which the Mumbaikars need not go all the way to Goa to enjoy those adventure rides on water.

I am sure some of these water sports are also available on other beaches in Alibaug. 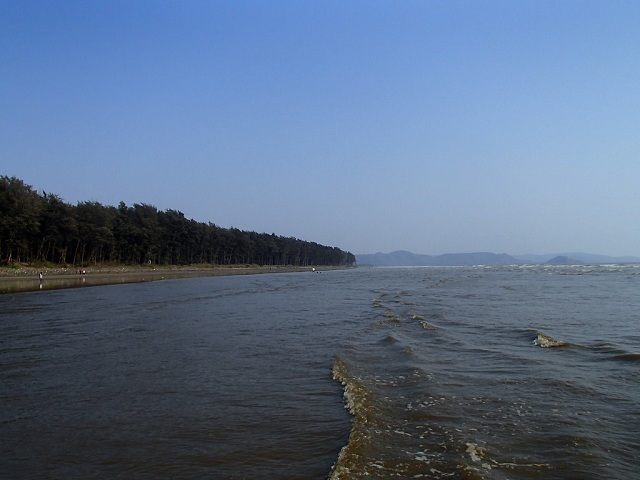 If you travel by car from your beach cottage in Alibaug, you will cover the 9 km distance to reach Nagoan Baech in about 12 minutes. All the water sports that are available in beaches in Alibaug are also available in Nagaon Beach. This Alibaug beach is very clean. Moreover, the backdrop of green cover gives the beach an exotic Amazonic look.

This is where the ferries from Gateway of India, Mumbai arrive and the beach jetty is conveniently constructed to accommodate several ferries at a time. In addition, a pier here gives an authentic look of a harbor.

Being a center of hustles and bustles, the rich and famous Mumbaikars have sprawling beach bungalows. Seeing that trend, entrepreneurs have built many accommodations for tourists to Alibaug beaches.

Alibaug Beach is located 1.8 km from this deserted Varsoli Beach. Surprisingly, the sand is white here whereas the nearby beaches in Alibaug have black sand.

You can indulge in any one of the various water sports in Varsoli Beach also.

It looks the banana boat ride is not for all.

If you love beach walking, you can walk up to the Akshi Beach from your hotel at beach in Alibaug. The distance is 6 km and the route is serene and scenic.

Visitors to this Alibaug beach also go to see the Korlai Fort built by the Portuguese during the 16th century. 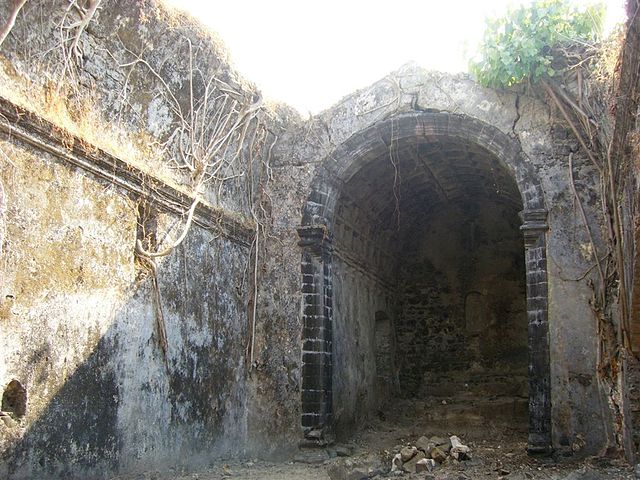 A unique feature of Korlai beach is its two color sand-black and white.

This beache in Alibaug receives hoards of visitors throughout the year. Inexplicable though, you see a range of sea birds here that include a rare species of ‘sand plover’.

As it is located nearly 50 km away from beach in Alibaug, Murud Beach sees only a trickle of tourists.  For this very reason, rich people have built seafront bungalows to have the beautiful beach all to them. 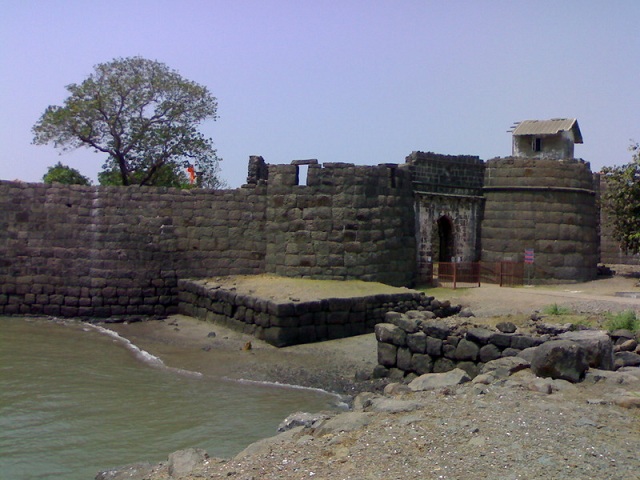 Unlike Korlai Fort, the Kolaba Fort is not fully ruined and hence attracts historians and tourists.

You will find a range of staying options in Alibaug and choosing is easy if you know how much can you afford.

This is a highly rated villa in Alibaug near Mandawa beach. Good homely ambiance and with all the modern comforts, Paradise Villas are sought after holiday accommodation in Alibaug. The resort has air-conditioned rooms.

The exact location is on the Alibaug to Revas road. Call 99219 90000 to inquire more about the facilities and amenities.

This picturesque retreat in Alibaug is located near Varsoli Beach. True to its name, it is located slightly away from the main road and for this reason alone, tourists with families prefer this Alibaug retreat.

I read the food served in Dewdrop Retreat is excellent.

Call 02141 220 160 for booking your retreat. Since there are only 8 air-conditioned cottages in the retreat, advance booking is necessary.

To conclude, while Mumbai can be chaotic and expensive, Alibaug that is located very close to Mumbai has all the attractions of a coastal city with the added advantage of less pricey.

9 Farmstays and Homestays near Mumbai for your weekend holiday

Nice article, never knew such places of adventure sports exists nearby Mumbai. Thanks for this detailed information.

6 Highly Visited Ski Resorts in the...