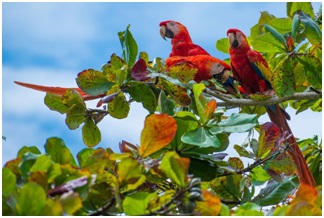 Though it covers only 0.03 percent of the world’s surface, Costa Rica is home to six percent of Earth’s biodiversity. This high degree of biodiversity, along with Costa Rica’s 3,316 acres (1342 hectares) of national parks and nature preserves, makes this Central American nation a top destination for bird watchers. Even if you’re not normally interested in bird watching, you won’t want to miss the chance to explore Costa Rica’s natural wonders and spy some of its exotic, unique and gorgeous bird species, including jabiru storks, scarlet macaws and quetzals. Here are some of the best places to find them.

The Monte Verde Cloud Forest Reserve gets its name from the region’s rare atmospheric conditions, which allow it to maintain a constant cloud cover. Ninety percent of the preserve consists of virgin, old-growth forest, and the area is home to an astonishing number of plant and animal species. More than 2,500 species of plants live here, including the most species of orchids that can be found in a single place. An early-morning bird watching tour of the reserve will give you the chance to spot more than 400 species of birds, 100 species of mammals and 120 species of reptiles and amphibians. Here, you can see hummingbirds, quetzals, toucans, goldentails, trogons and three-wattled bellbirds.

The immense Palo Verde National Park covers 45,492 acres (18,410 hectares) in Costa Rica’s Guancaste province. Palo Verde’s dry tropical forests are home to a number of bird species, and it’s an important stop for migratory species traveling through from both North and South America. During the rainy season, more than 250,000 birds will spend time here.

However, the best time to visit Palo Verde is during the dry season, from January to April, when it’s easier to get around and when the trees lose their foliage, allowing visitors unobstructed views of local wildlife. See tropical stream and marsh birds like herons, kingfishers, gallinules, jacanas, limpkins, spoonbills and ibises. The best Costa Rica transportation option for Pale Verde is a boat tour of the Rio Tempisque, which passes through the park, in Puerto Humo. Make sure your tour passes by Isla de Pajaros, or Bird Island, where most species nest.

Carara National Park can be found about 30 miles (48 kilometers) west of the capital city of San José. It’s home to one of the nation’s largest remaining populations of scarlet macaws, but that’s not the only bird species you can see here. Carara marks the transition zone between an area of dry tropical forest and tropical rain forest, so species from both types of ecosystems live here, including many that aren’t normally found living side-by-side. Here, you’ll have the chance to spot motmots, orange-chinned parakeets, and multiple species of trogons, hummingbirds, woodpeckers, jacamars, antbirds and manikins. 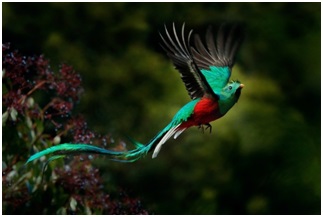 San Gerardo de Dota is a sleepy, remote village located in the mountains south of San José. In the surrounding forests, you’ll find more than 150 bird species, including the sooty robin, the quetzal, acorn and golden-olive woodpeckers, the spot-crowned woodcreeper, the fiery-throated hummingbird and several other species, such as the violet-eared and the stripe-tailed, the red-tailed hawk, blue and white swallows, the tufted flycatcher, the ruddy-capped nightingale thrush and more. Because it lies along migratory routes, you can even see North American bird species here during the winter months when they’ve flown south.

The Caño Negro National Wildlife Refuge is an important nesting site for aquatic birds, including the large jabiru stork, which can still be spotted here. Many other migratory waterfowl nest here, on the Caño Negro Lake and Rio Frio, during the wet season. Thousands of storks, ibises, ducks, anhingas, spoonbills and cormorants can be seen here, even during the dry season when the river recedes considerably. You’ll need to hire a boat to penetrate these wetlands.

Thanks to the hundreds of bird species that live in its national parks or migrate to and from its forests, Costa Rica is a world-class bird watching destination. Don’t visit without going on at least one bird watching tour; many of the resplendent species here will take your breath away.