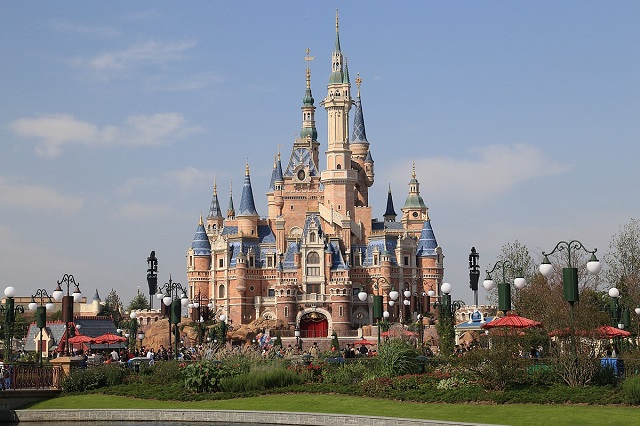 Start by getting off the train

Disneyland has a total of two entry barriers. One is the security channel, the second is the ticket channel.

The first subway about 7:15 arrived at Disney, and then line up through the security channel, if the first subway arrived, through the security channel time is about 7:35, after entering the queue for the ticket area, if the time to too early, the ticket area is not released, you need to wait in line outside first, probably close to 8:00 or so, the ticket area will be open, and then will go through two ticket inspection, the first is The first time is just after the purchase of tickets, and the second time is the actual entry into the park. So the real time to enter the park is about 8:25.

While waiting to buy tickets, you can first connect to the official Disney Wi-Fi, and then you can also go to this brochure, generally familiar with the basic situation of the park.

Soaring over the horizon

After the second ticket gate, even if you really enter the Disney Park. After entering the Disney park, you will be shocked by the beauty in front of you, but do not be confused by the beauty, the beauty has been in, that is, you can not play entertainment facilities which is very embarrassing. Then you will find that most of the people are ignoring the beauty in front of you, spread your legs to run in the same direction, yes everyone’s purpose is located in the adventure island soar over the horizon of the FP, so follow the flow of quickly run to the adventure island.

The wisest decision is to run directly to the flyover horizon instead of queuing for FP, the queue length will not exceed 15 minutes. This is also a good friend of the owner to give me advice, and also personally practiced, true and credible, that day only about 10 minutes in line has played off, is the queue length of more than 150 minutes of the popular project!

If you would like to visit Disney in Shanghai, you can visit Visa Express to help you to obtain the Chinese travel visa.

3 Tips to More Effectively Use Travel...

3 Things Worth Splurging on During Your...