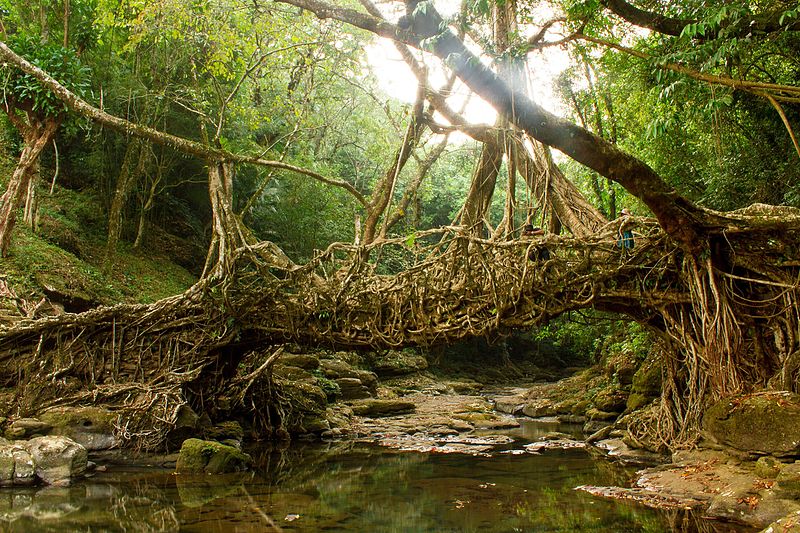 India is a diverse country with extraordinary natural wonders that can match the wonders of Africa or Egypt or Canada. In spite of the great potential for tourism, India is not attracting global tourists because of not very tourist-friendly infrastructure. Indian citizens are known to frequently visit several natural phenomena that have no scientific explanation. You can say some of them are unsolved natural mysteries that are beyond human comprehension.

I take it as my small contribution to give some exposure to 6 natural wonders of India that they certainly need. These include volcanic lakes, receding sea, optical illusion, and natural rock formations.

Let me share some of the best geographical phenomena of India that will make you gasp in sheer admiration. 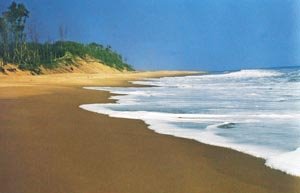 This is an incredible natural wonder in Orissa, India. I think such a natural phenomenon is not reported anywhere in the world. Imagine a sea that you saw in the morning would be nowhere to be seen in the afternoon but again is seen in the evening.

There is a small town in Chandipur, Orissa, India. In this Bay of Bengal town, the sea water recedes up to 5 km during the ebb and during the high tide, it returns. This geological phenomenon happens twice a day. Imagine a sea disappearing in front of your eyes!  Five kilometer is definitely not within the human vicinity! Tourists happily walk on the seabed catching the rare Horseshoe crab only to release it back on the beach.

Watch the sea during the low tide and high tide below.

How to reach Chandipur, Orissa, India 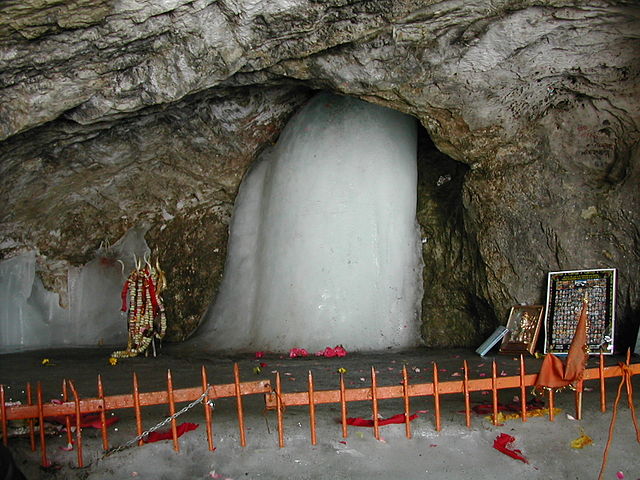 One of India’s holiest places, the Amarnath cave is the place where thousands of pilgrims go to Jammu and Kashmir to watch in absolute awe, the lingam (considered as the symbol of Lord Shiva) made of natural ice. This ice structure grows and shrinks in size along the with the moon’s phase. The location of this fantastic natural wonder is at a height of over 12,000 feet in Jammu Kashmir state in India.

Pilgrims numbering about 60k start their Amarnath Yatra in July from Srinagar. It’s an arduous trek facing harsh weather and the attacks from militants in Kashmir.

How to go to Amarnath cave?

The nearest railway station Jammu is 178 km away. Pilgrims take a taxi to Baital town and from there, they trek 15 km to the Ice Lingam. It takes a maximum of two days of walking. If you reach Srinagar by flight, you can go up to Pahalgam town by car. It is a major holiday destination in the Himalayas, India. From Pahalgam also, the yatris start their journey.

The Gandikota Canyon in India is certainly no match to the Grand Canyon, in Arizona, U.S.A. but still, it is a natural wonder and extraordinary geological phenomenon. 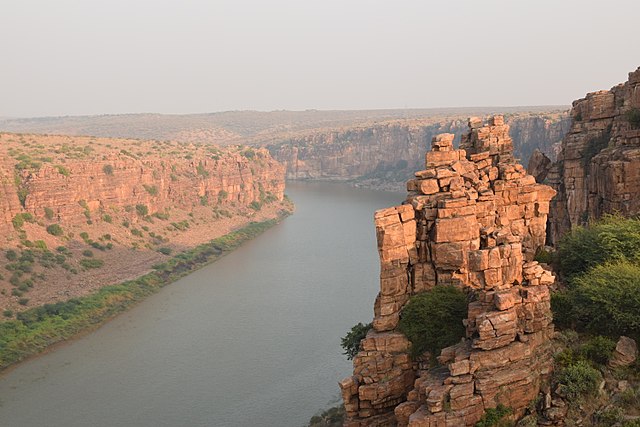 What a breathtaking sight!

Gandikota Grand Canyon (Indian Arizona ) is located in Andhra Pradesh, Cuddapah district. Unlike the Grand Canyon of the U.S. that is several thousand years old formations,  this natural wonder in India is only a 1000 years old.

The best viewpoint to appreciate the full grandeur of the rock formation is at the top of the 300 feet valley from where the sight of river Pennar deep down at the gorge which is surrounded by the giant rocks is simply thrilling.

How to reach Gandokota Canyon in South India?

The nearest airport is Renigunta, Tirupathi. From there, you can drive to cover 220 km. The major city is Bangalore and the distance to Gandikota is 350 km.

However, the most convenient way to reach Gandikota is to take a train from Bangalore and get down at Jammalamadugu railway station that is 18 km before the destination. Another major railway station is Cuddapah that about 75 km only.

Avoid the hot months to visit the Gandikota Canyon. The best time to visit is from October to February.

Does anything more need to be said about this gravity defying natural wonder of India?

The Malshej ghat is only about 35 km Pune, the second largest city close to Mumbai, the capital of Maharashtra state, India. This place is part of the beautiful Western Ghats. There is a fort called Sinhagad Fort on this high point in Sahyadri hills.

How to go to Sinhagad Fort, Pune?

You can hire a taxi from Pune and reach the reverse waterfall in about 45 minutes. Pune is well connected by flights and trains from all parts of India, especially from Mumbai which is only about 3 hours by fast train from Pune.

Cherrapunji, the wettest place in the world is in Meghalaya state in India. In the jungles of North East India, lives the Khasi tribe. Ingeniously, they have constructed several bridges across the mountain streams using the roots and trunks of various rubber (Ficus elastica ) trees by pulling and twisting the roots when they are young. Since the roots get stronger as they grow, the bridges too are stronger than ever. 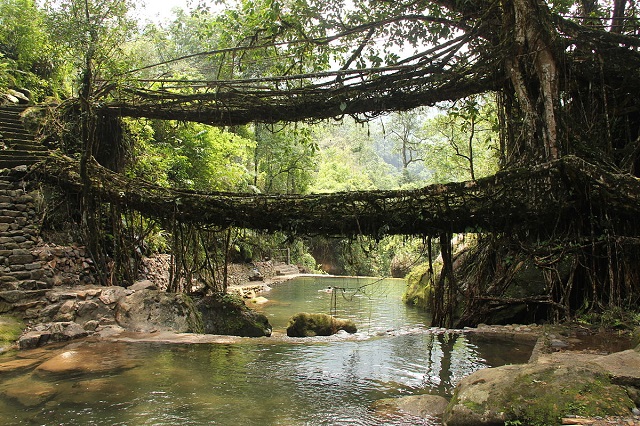 How to reach the Living Double Decker root bridge.

The exact place to go to see this natural wonder of India is a village called Nongriat, which is 12 km away from Cherrapunji. From Cherrapunji, it takes quite a bit of trekking in the mountains to reach the beautiful double-decker living root bridge. The entire place is spectacular with misty hills and dense greenery.

Cherrapunji is about 54 km from the state capital Shillong.

There are flights to Shillong from New Delhi, Aizawl, Calcutta, and Bangalore.

Guwahati is the nearest railway station, 105 Km away from Shillong.  There are plenty of buses to Shillong from Guwahati. The journey time is only 3 hours.

What will happen when a meteor from outer space crashes on the earth at a speed of 90,000 km per hour? I know it is a dreaded thought but it happened in India, some 50,000 years ago. The result is the formation of a crater that got filled with rainwater and mountain streams to give us a lovely looking lake called Lonar Lake because it is located in a place called Lonar in Aurangabad, Maharashtra state, India.

Even the mighty NASA is baffled by this natural wonder of India.

This meteor lake is in the midst of a forest and inhabited by wildlife of several species. Today, the place is a wildlife sanctuary in

The meteor lake’s diameter is 3900 feet and the water surface starts at about 450 feet down from the crater’s rim. 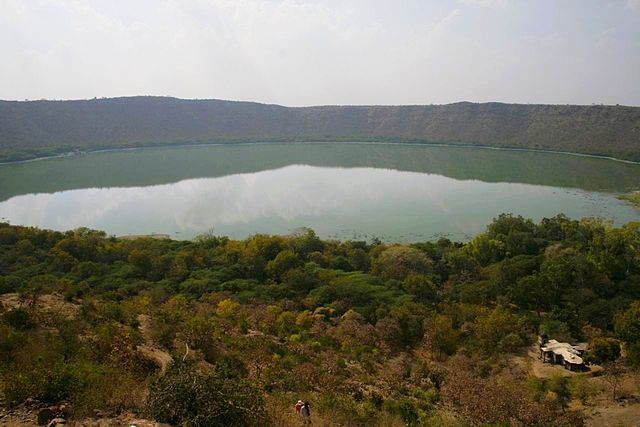 How to reach the Lonar Lake

Aurangabad is the nearest airport but it still about 160 km away from the Lonar Lake. A cab is the only option to reach the crater.

Even by train, it is 90 km from Jalna railway station.  Aurangabad itself has excellent road connectivity from Mumbai, Nashik, and Pune, the three major cities of Maharashtra.

Visualizing the crater at a remote place, I feel thanking God to have arranged the meteor crash safely away from human habitation.

I know I have left out many more breathtaking natural wonder of India but I assure you I will cover them in due course.

4 Tips To Choose the Perfect Clothes for Your Vacation