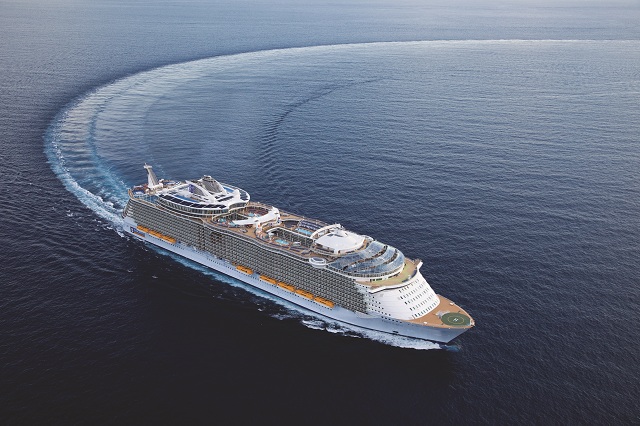 It is very surprising to note that you can buy tickets on a cruise ship even a week before its departure.  No, I didn’t book my tickets but a friend of mine recounted his experience of how he decided to go on a Caribbean Islands cruise and which cruise liner he chose, which is best Cruise Lines for the money and why etc.

What he was trying to say was, only a small percentage of people prefer to go on a cruise holiday, be it an ocean cruise or a less cumbersome river cruise. This is evident from the availability of cruise package tickets just five days before departure.

Regarding how he chose a certain cruise liner, he said it is a very simple process.

The competition among the limited number of ultra-luxury floating cities (yes, these are not called anymore as floating hotels because of their size, facilities and amenities offered) is also tough.

To lure the prospective customers, they keep slashing their prices, throwing extra benefits for the early birds, and adding incredible luxuries in their cruise liners.

Let us have a look at some of the best cruise lines in the world, what are the destinations they offer, their ships’ luxuries, port of departures and ports of calls etc. 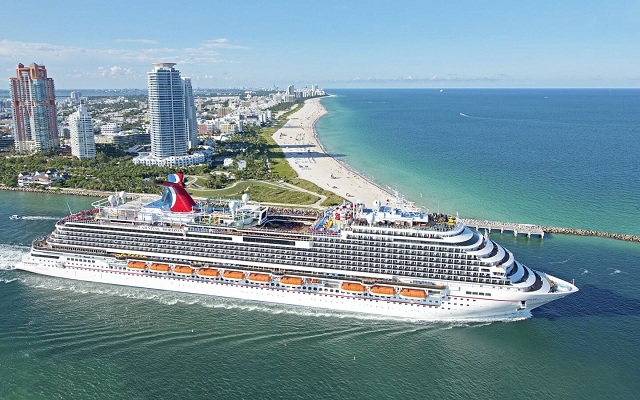 Lovely capture-right? It was shot as the cruise ship was leaving a port. Look at its size. It is huge and cannot be visualized even if you know the ship’s length, breadth, and height. Carnival Cruise Lines are at the most sought-after cruise ships in the world irrespective of their cruising grounds which are mostly the Caribbean Islands. In addition, they also offer cruise packages to Canada and Alaska.

However, their ports of call would entice even a non-starter to rethink his views of cruise holidays. Here are a few of their mooring docks:

Carnival Cruise offers cruise packages that involve 2 to 5 days, 6 to 9 days and more than 10 days.

As far as the luxuries and amenities offered in the ship, because of competition, every cruise lines offers unmatched luxuries that the other ship quickly implement in their vessels too.

So, you must chose a cruise ship based on the itineraries they offer and based on your home location’s proximity to the ship’s departing port.

Its official name is Silver Wind.

Did you notice that the majority of the cruise ships’ photos are shot from an airplane? I think the aerial view is impressive than other views. In addition, other views of a cruise ship cannot capture all the grandeur of the vessel.

They operate on the Caribbean sea and cover Central America, New Mexico, and most of the Europe including London that offers docking facilities.

Wow! The Silver Cruise Liners seem to roam the oceans of the world. If only you choose this Silver Cruises, you can plan for a cruise to every continent, every year.

Look at one of the suits on board Silver Wind. 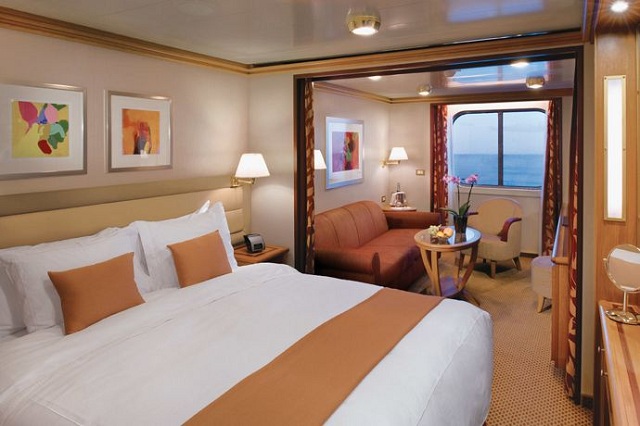 I am really surprised to note that the Silver Cruises is an Indian company that offers worldwide cruise destinations because Indians are not to favor cruise. They are like Americans who want to complete their holiday in a jiffy and get back to their work.

This cruise liner can be seen as far as the Caribbean sea. They also offer cruise packages to Alaska and Mexico. 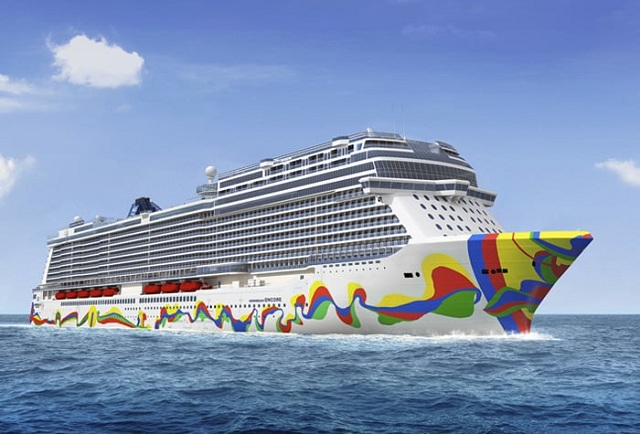 Other cruise destinations include: 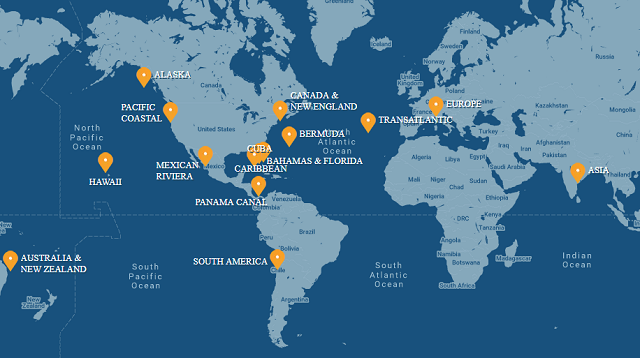 So, what do you get to experience onboard?

Oh, the usual works that include:

Looking at their cruise destinations offered, this cruise company could be a very good choice. Go over their 360+ destinations below and you will agree with my opinion. 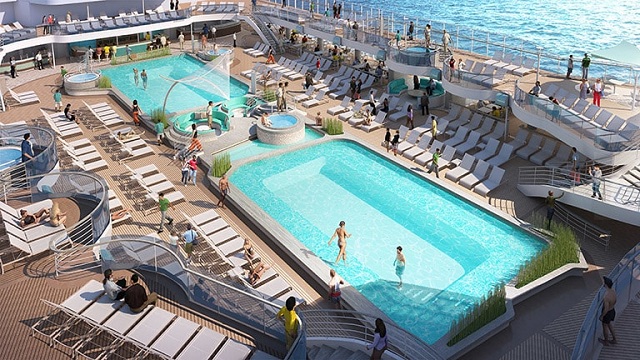 360 destinations mean their cruise liners will roam around every continent and every major oceans and seas-right?

Here are their major ports of calls that you can all cruising destinations:

I think except Africa and Russia, Princess Cruise Ships cover all the continents.

Apart from the usual entertainment options onboard, there is the unique ‘seawalk’ that is said to be thrilling. 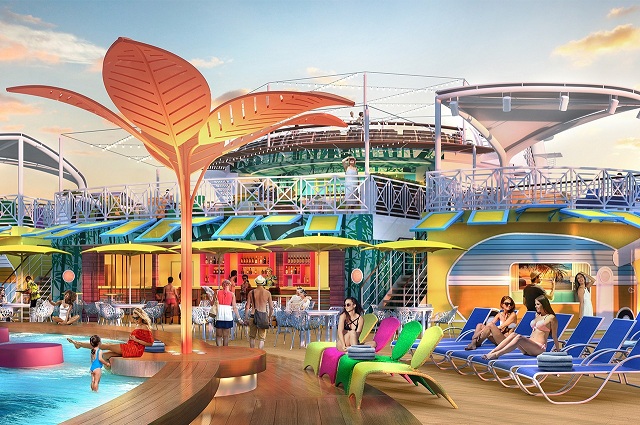 That’s one of the decks offering the passengers wonderful fun activities options.

Here is one more panoramic view of the cruise ship’s top-tier deck. 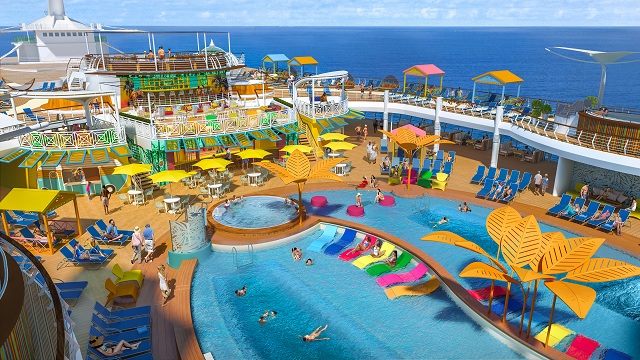 Going over the list of destinations for your cruising vacation, I think this cruise liner is doing full justice to their possession of 25 yachts.

Again, except Africa and Russia, all other continents are covered by the Royal Caribbean cruises.

These 5 cruise lines operate on just about every big ocean and dock at incredible locations around the world that we have been yearning for.

Jalori Pass-Where It is, What to See and When