Home Travel IdeasTravel Advice How Much Liquid Luggage Can You Carry in a Plane?
Travel Advice 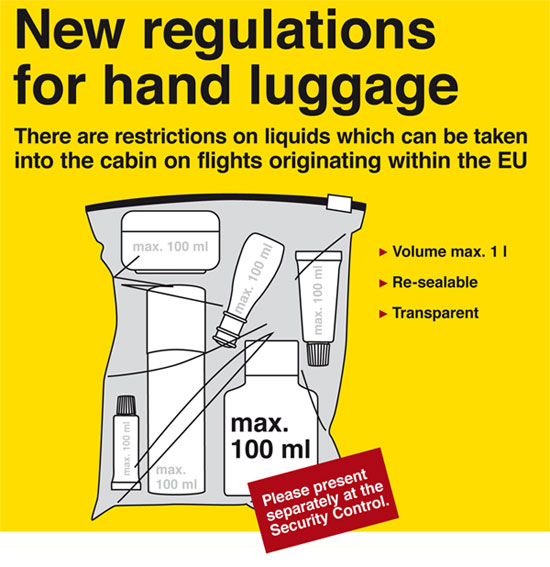 Can we carry liquids luggage on the plane? If so, what sorts of liquids allowed, and what banned? Will the in-flight beverages include banned liquid luggage items? How much liquid can you take on a plane?

It is imperative for you to know the rules about liquid luggage even before you plan your trip as there is no point in excusing yourself of your ignorance to the flight staff and airport authorities.

There is some liquid luggage allowed on planes, and you need not assume that all kinds of liquids are banned in your hand baggage.

Have you heard of TSA which reads “Transportation Security Administration” when expanded?  All airlines strictly follow the rules laid by the TSA. Before the year 2006, everybody allowed to carry liquid luggage in planes, but a terrorist attack forced the TSA to ban liquid luggage in flights.

This liquid luggage ban implemented in August 2006, but there was some relaxation in September itself.

The allowed liquids are:

However, these allowed liquid luggage should carry in transparent bags. The airport security system swiftly modified the security scanner to detect the allowed and banned liquids.

Nonetheless, you should not take full advantage of the new rules and carry huge quantities of liquid luggage. You are allowed to carry only so much that lasts the flying duration. The granted quantity should adhere to TSA’s 3-1-1 rule.

So, What Does This 3-1-1 Rule say Regarding Liquid Luggage?

The liquid containers must placed in 1 transparent plastic bag. That’s the first “1.”

Each passenger allowed only one bag. That’s the second “1.”

Hey folks, this rule applied only to hand baggage only.  You can carry liquids in your check-in baggage as long as they’re not prohibited items.

When you carry liquid luggage in check-in baggage, you must ensure they don’t spill inside your bag and spread to other luggage lying around.

What About Large Quantities of liquid?

I know your next question. What if the flight duration is more than 10 hours wherein 100 ccs of baby needs (milk and juice) are certainly not sufficient? Even certain liquid medicines required more than the allowed 3.4 ounces.

You are permitted to carry more if your needs are reasonable, provided you declare them at the boarding pass counter. Even ice can be carried for certain medicines that require cool storage.

The food supplied in flights is mostly solid. I observed that some flights do not even offer food. In such cases, if you are on a liquid diet, it is advisable to pack your own liquid food at your home and carry in your cabin bag. Flights that do not offer free food may sometimes sell water and juices. You can safely rely on them.

If you are a shrewd traveller like me, you will bring your own travel meals.

For complete information on the 3-1-1 rule, visit the TSA website.

From this post, you get a clear idea of how much liquid can you take on a plane.