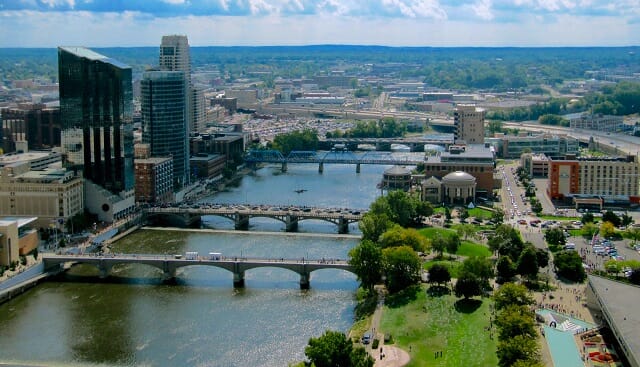 What can you see by undertaking Michigan Day Trips?

Probably, Michigan is the only state in the United States that can demand all 30 days in a month from a tourist. Though the numerous lakes are the biggest Michigan attractions, there are several more places to see that warrant day trips from Michigan.

Before I take you to the great four lakes namely:

I will go over some other extremely beautiful places in Michigan.

In order to make the majority of Michigan day trips, you have to be based in several cities and towns across the state of Michigan.

Just make a note of all the destinations and plan your trip/trips accordingly.

These are lake islands that are located in Lake Superior. A total of eight small islands are home to several species of birds. All eight islands comprise the Huron National Wildlife Refuge. If you can identify Herring Gulls, you can spot them easily on these eight islands because they live here without any danger. In addition, Lake Superior is so vast that there is no dearth of prey for aquatic birds. 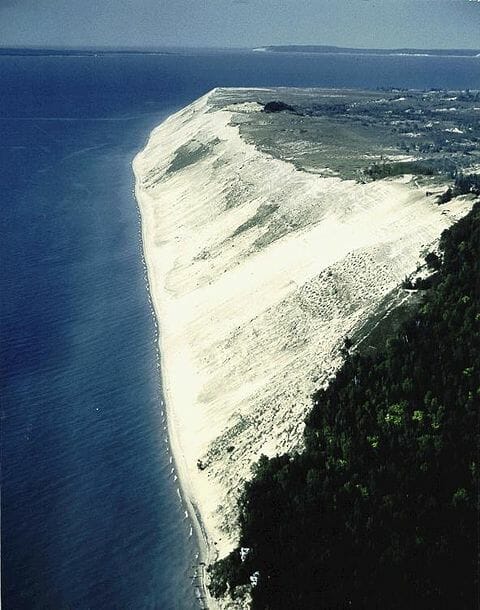 What you see above is one of the scenic locales in Lake Michigan.

The nearest town to visit this Michigan attraction is Empire Village in the county of Leelanau. During the summer, hundreds of visitors come here with their own canoes and kayaks. Some people also bring their own tents to pitch up on the lakeshore.

This is one of the most popular places in Michigan for camping.

By the month of February, the entire lake Michigan freezes.

To see the sand dunes and do sand-skiing (sandboarding), you have to visit the shores of an adjacent water body called Glen Lake. 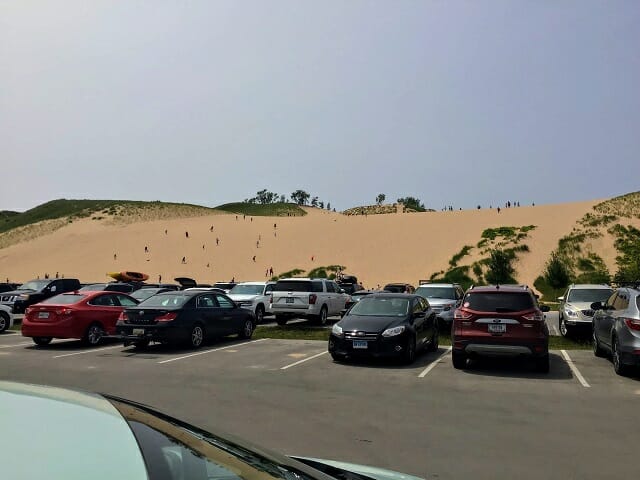 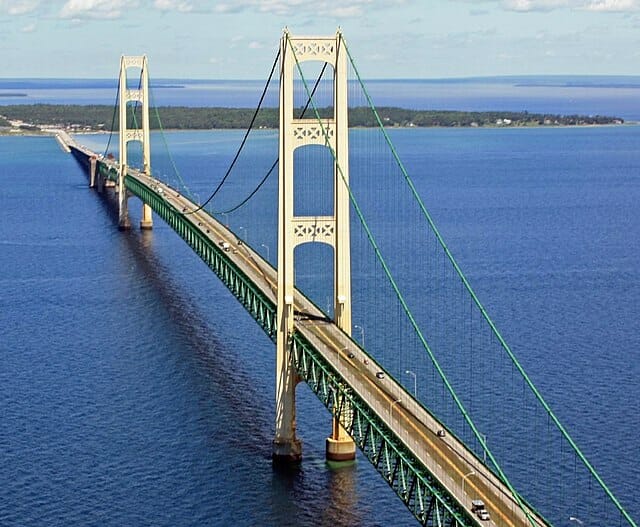 Isn’t it stunning? Of course, an aerial view of anything above a water body is very attractive. The Mackinac Bridge connects the two peninsulas of Michigan. They are called the lower and upper peninsula. Both are formed by the flow of Lake Huron.

Both the peninsulas are separated by two small straits known as Mackinac Straits.

Though the maximum width of the straits is only five and a half kilometers, the length of the Mackinac Bridge is a little more than 8 km over the Mackinac Straits.

Due to the height and the length of the bridge, many people are reluctant to drive across. Such people with gephyrophobia (fear of bridges and tunnels) are offered assistance to drive over the bridge.  This service is offered free of cost! What a thoughtful arrangement by the United States!

Another big attraction of the Mackinac Straits as a day trip in Michigan is the short but scenic ferry ride between the two habitats on either side of the Mackinac Bridge. The boat ride connects the two towns called St. Ignace and Mackinaw City.

This lake island is located in the Mackinac Straits and there is a resort. You can reach the island by ferry but once on the island, you can move around on bicycles or in horse-drawn carts.

When the lake freezes, a snowmobile is used to carry people. During your day trip in Michigan, you can combine both the Mackinac Bridge and the Mackinac Island.

Grand Rapids is one of the cities in Michigan state. It is ranked as the second most important city. The first rank is held by Detroit, the motor city of the world and the home to the Ford Motor company.

As the maker of several well-acclaimed furniture, Grand Rapids is known as the ‘furniture city’’. There are two important places to see in Grand Rapids.

A visit to Grand Rapids will make one of the finest day trips in Michigan.

If you are based in Detroit, your day trip to Grand Rapids will consume 5 hours of drive both ways. The distance in between is 250 km. 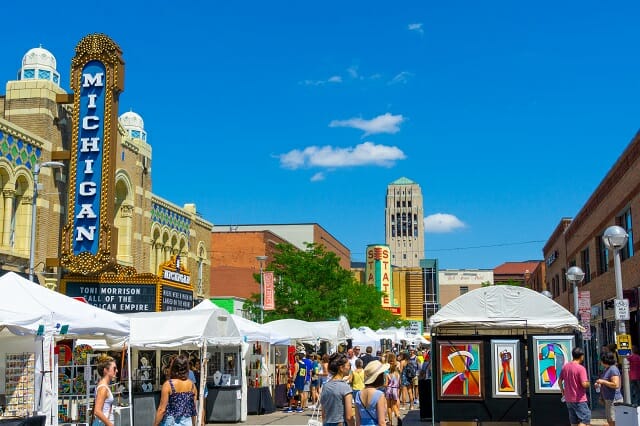 The permanent residents of Ann Arber are severely proud of Huron River. When the spring arrives, the river is happy to let then people launch their canoes and kayaks and go paddling.

Throughout its 210 km length, the river shores have well-laid out parks, picnic, and recreation areas.

The river flows through four more cities and several dams are built on it just to conserve the ecosystem and the water level.

The Huron River forks away into several tributaries and all of them drain to larger lakes including Lake St. Clair.

Among several beautiful places in Michigan, I would say Gaylord ranks high if you list out the 10 best Michigan attractions.

Its climate, elevation, golf courses, skiing slopes, and thin population (less than 5000) attract retirees from other cities of Michigan.

In addition, like many cities and small towns in America, Gaylord’s city’s fall colors are just brilliant to keep gazing at for hours together.

People from other localities of Michigan come with their families to Gaylord city to participate/watch water sports such as wakeboarding, water skiing, and jet skiing in Otsego Lake.

The water sports and the scenic pine trees comprise the Otsego State Park.

A visit to Ann Arbor can be easily combined with a trip to Jackson city. Just a 30-minutes drive from Ann Arbor will get you to Jackson.

If you happen to stay in Ann Arbor, you can allocate a full-day trip to Jackson as there are several places to see and things to do.

There are museums that attract proud American history buffs. There is a waterfall called Cascade Falls to see If you are a collector of antiques, you can spend an hour or so walking through the Jackson antique mall.

See some of the displays in the Jackson antique mall.

I think the word ‘Rapids’ in Michigan’s city name has been in vogue for a long time. Canadians used to travel to nearby towns during weekends. They just go downtown, take a stroll, eat in a restaurant and get back. It is one of their ideal day trips in Michigan.

When I was vacationing in Ottawa, my son took me to a few towns nearby that including Perth and Kingston.

Eaton Rapids’s life and culture center around the restaurants-filled downtown, a few parks, and finally the Grand River the scene of water-based adventures.

Yes, there is a Holland in America’s Michigan State. You can see glimpses of Dutch-American cultures reflected in food, dress, and festivals.

As a typical identity of Dutch, this Michigan Holland city is famous for the annual tulip festival. The city experiences an unprecedented flow of tourists from all over Michigan just to see the multi-color Tulip bulbs. I read nearly 6 million tulip flowers can be seen all over Holland city.

I am sure that would constitute one of the wonderful day trips in Michigan just during May and June.

The motor town of the world, the city of Detroit is one of the most visited cities in North America by businessmen and motor technicians that include thousands of software engineers who look after the car automation features.

If you are stationed in Detroit, you may have to make as many as 14-day trips in and around the ‘motor city’.

Here are some of the top Michigan attractions that you can see in Detroit.

This is the biggest attraction in all of Michigan. The 7 separate but inter-connected skyscrapers house the headquarters of General Motors. In addition, there is a 73-floor Mariott Hotel.

Apart from these, the biggest Michigan attraction houses numerous restaurants, shops, and theaters.

This place is so vast that you would end up staying in the Renaissance Center at least until midnight. 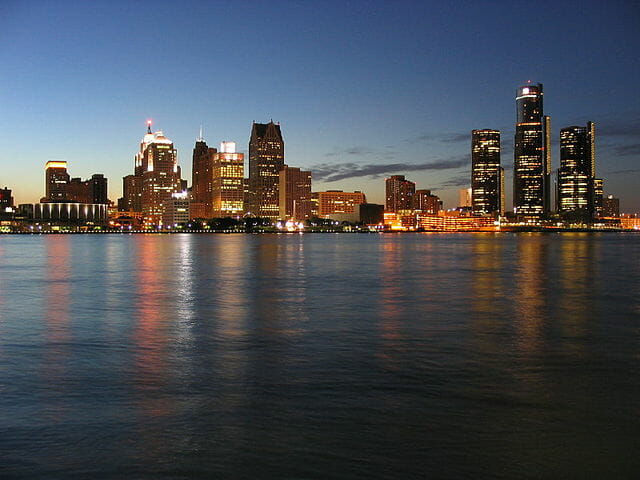 This is the scene of the location of Renaissance Center. The river promenade is one of the finest attractions in Michigan.

This is just not a marina of the Detroit River, buddy, but it is almost another big city within the city of Detroit.

Some of the prominent buildings and attractions in Detroit International Riverfront include:

This harbor also receives and docks several cruise ships. The parking and departures of the cruise ships are great to watch.

Belle Isle is a small river island that is converted into a state park.

I can go on and on. It is better to see all of the Detroit Riverfront in person.

It is a tiny river island in the Detroit River. It is a wonderful place to with your children. They would surely like the park and the aquarium there. As one of the day trips in Michigan, it would suit your crowded sightseeing schedule. You can go and come back in half a day.

The James Scott Memorial fountain will cheer everyone. 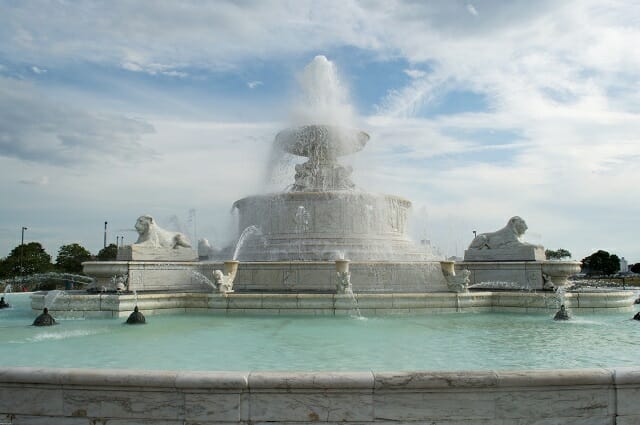 Belle Island is accessible via a road bridge known as MacArthur Bridge.

Other things to see in Belle Island include:

Actually, the bridge that is connecting the U.S and Canada in the state of Michigan has a name that goes by ‘Ambassador Bridge’.

It is a must-visit place if you are touring Michigan. Pre-plan your day trips in Michigan by including a visit to the U.S.-Canada border crossing bridge in your itinerary. It will be a pleasure to watch the heavy border crossing of people and goods.

The total length of the Ambassador Bridge is 2.3 km!

In many American and European cities, China Town locality attracts a cosmopolitan crowd. The atmosphere is filled with the distinct aroma of Chinese food.

This is the first time I am coming across a ‘Greektown’ in the U.S.

The Greek Immigrants run this district that is filled with Greek architecture buildings, Greek-themed restaurants, and Greek taverns with names that include Pegasus Taverna.

Michigan day trips enable you to see and appreciate most of the Michigan attractions. I like the Ambassador International Bridge the most.

Trains in Italy: Grand Tour of Italy by Train