Trains in Italy: Grand Tour of Italy by Train 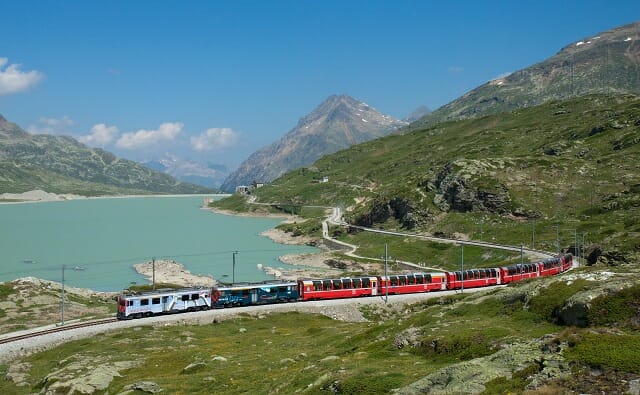 The belief that Italy is the most complete country in the world for traveling in trains in Italy is unshakable. Whatever you ask for as a traveler in a country, Italy has.

In this blog post, I am covering some of the breathtaking Italy trains in the world. In no other country in the world, you can see such a diverse landscape while traveling on a train.

I have seen Indian countryside and cityscapes while traveling on several train routes. I must admit the Indian trains take you through picturesque landscapes including lovely mountains and stunning waterfalls.

However, I can firmly say they are no match to the grand tour of Italy by train. They go through astonishing green and white mountains, blue lakes and seas, a huge network of interconnecting canals, and lovely wine countries.

This Train in Italy should be rated as one of the most beautiful train journeys in the world. The Bernina Express starts from Tirano in Italy.

Tirano town is located very close to the Switzerland border. While the town itself has nothing much to offer to a foreign tourist, it occupies a dark spot on the tourist radar because of Bernina Express and the route it goes through has attracted the officials of World Heritage sites.

The train goes through the World Heritage Site known as the Rhaetian Railway to enter Switzerland’s Swiss Alps.

The train terminates at Chur, a major city in the Grisonian Rhine Valley, passing through St. Moritz, one of the important ski resort towns in the Swiss Engadin Alps.

Did you notice the word ‘Rhine’ above? Yes, you can see the legendary and romantic Rhine River during your Bernina Express ride. 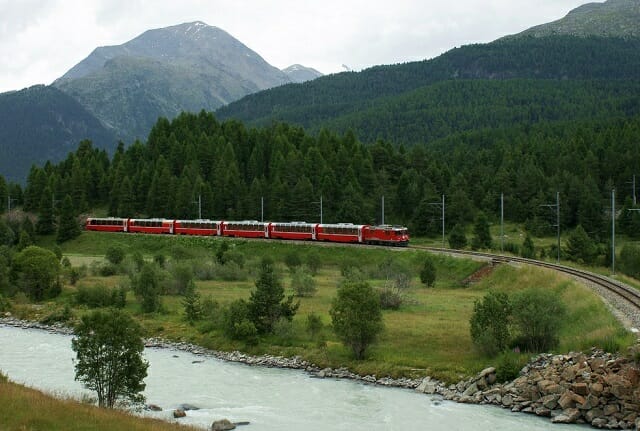 If you chose to travel during the spring season, the snow is replaced by cool green pastures that will steal your heart.

The large windows in the train give you panoramic views of the Italian and Swiss countryside.

Since this is one of the best trains in Italy, you can expect quite a rush of tourists and hence advance reservation is a must.

I reckon a ride in Bernina Express is certainly an once-in-a-lifetime experience.

That’s the best description from start to finish of your Florence to Venice Train in Italy. Even though the Italian train ride lasts just two hours, it is unmistakably one of the most beautiful trains in Italy. 260 km is the distance that is covered by superfast trains.

See your Italy train  map below. 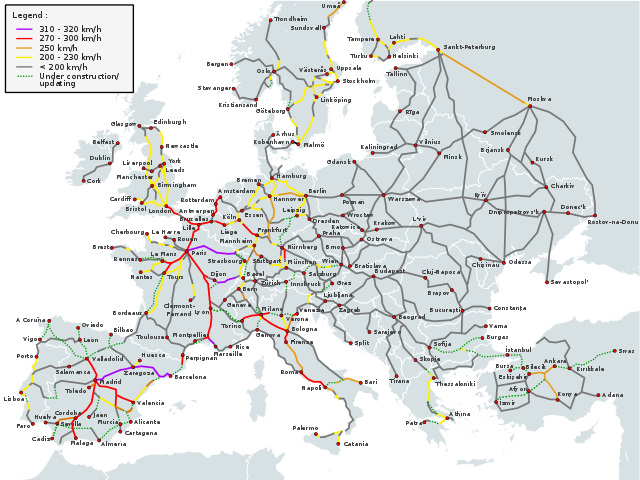 Both Florence and Venice are two of the top tourist attractions of Italy. While Venice is the city of numerous crisscrossing canals, Florence is all history and culture, on the banks of the Arno River.

Similar to the Indians that are usually proud of their national rivers, the Italians too take immense pride in preserving their rivers.

The Tiber is the number national river of Italy and the Arno River ranks the next.

Florence to Venice Train in Italy

The train passes through some of Italy’s iconic landscapes including the historic city of Bologna. It is also one of the wealthiest cities in Italy. I think even the city of Rome comes behind it only.

Bologna and Prato are known to be the great Renaissance cities in Italy. The other beautiful cities that you can watch from your train are:

If you take a slow train, you can set your feet in each of these historic Italian cities. The most picturesque part of your Train in Italy is when the train climbs the Emilia-Romagna and descends again. As a matter of fact, you are advised to take one of the slower trains that consume nearly 6 hours to cover the 250 km

You may be aware of the fact that Florence is part of the Tuscany region in Italy. The Tuscan region is the seat of some great piazzas and magnificent cathedrals.

Florence to Venice train route is a high-traffic one that sees as many as 50 trains in a day.

As you can see, the train rides all along the Adriatic Sea coast, giving you a sleepless journey because you just can’t even afford to blink at the ocean view.

It is a four-and-a-half-hour journey covering approximately 500 km.

Since the train route goes through gorgeous beaches, you can see several resorts that dot the land between Rimini and Bari.

Some of the important cities that you can see roll by as the train chugs along the Adriatic Sea are:

The last-mentioned city is the seat of a majestic and imposing Piazza called “ Plazza Ducale”. 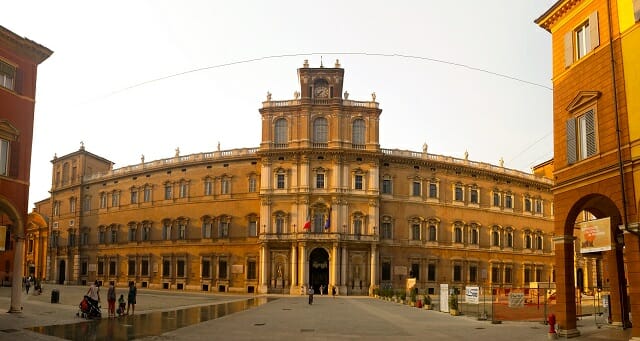 Probably, this is the shortest journey in train in Italy.

That is highly recommended for train travel buffs.

This train in Italy ride lasts just 25 minutes and the distance covered is only 17 km!

So, what can you see in such a short time? What is so special for the train journey to get listed as one of the best Italian train journeys?

Both the points of the journey are located on Italy’s west coast, facing the Mediterranean Sea.

Reggio is only a stone’s throw distance away from Sicily, Italy’s most visited island. Only the Strait of Messina stands between the two.

Here is a picture of Scilla Castle in Scilla city. 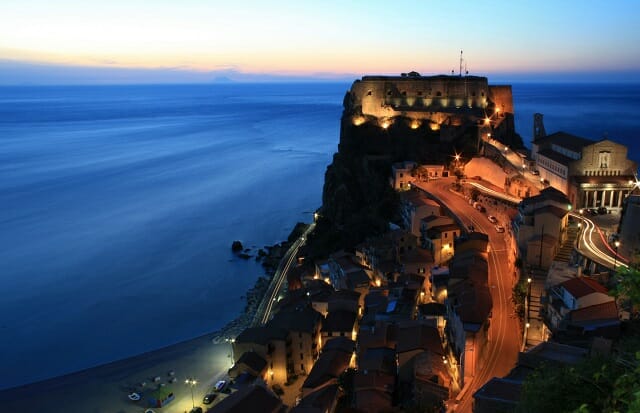 Castles look entirely different when you viewed from a distance. As the train nears the station of Scilla, the castle appears spectacular.

In addition, you can see Mount Etna, Italy’s biggest volcano at a distance in the Mediterranean Sea.

All the 25 minutes of your Italian train journey is along the Mediterranean Sea. Wouldn’t you love it?

Rome in mainland Italy is connected by a train with Catania, the second most important city on the island of Sicily, right below Mount Etna, the ever-active volcano in the world.

The most exciting part of this train journey in Italy is the crossing of the Ionian Sea by ship. I mean the entire train gets loaded onto a large ship! Incredible feat!

Rome, the capital of Italy is located on Italy’s west coast. The train runs along the Ionian Sea offering a spectacular view. Please note that those who are sitting by the right side windows will be lucky to enjoy the views.

Catania is on Sicily’s east coast. Now the stunning views switch over to the left of the train

The total distance covered is 537 km.

The train terminates at a train station called Siracusa, part of Catania municipality.

The train’s sea crossing point is a port town known as “Villa S. Giovanni”.  The ship goes through the Straits of Messina, the diving water body between Italy’s mainland and the island of Sicily.

When you buy the train ticket, it is inclusive of the ferry ride.

From Villa S. Giovanni to Sicily Island, the ship voyage takes about 45 minutes.

When the train is loaded in the ship, you can get off the train and go around the ship. You can even relax on the upper deck of the ship to enjoy an uninterrupted view of the sea.

In order for this to happen, you should take the first train that departs from Rome.

The first leg of this train in Italy gives you fabulous views of Italy’s coastal towns and many more that include Mount Vesuvius and the splendid Bay of Naples, Italy’s foremost beach resort city.

Are you aware that Mount Vesuvius is also a volcano?

There is no better way to go to Sicily from Rome than this train journey in Italy.

A few other Italian train rides include:

If you want to see all the beauty of Italy, the train journey is the best.

6 Incredible Camping Sites in U.S. That...

Why Canada is the World Most Beautiful...