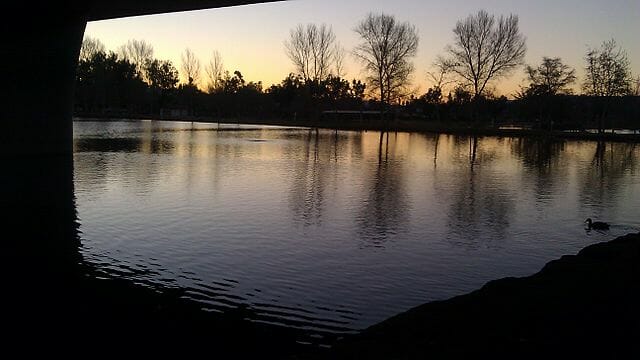 Santee Lakes and the area surrounding the picturesque artificial lakes are developed as an official recreation area by the Government of California. Known as ‘Santee Lakes Recreation Preserve.

How many lakes comprise Santee Lakes?

There are seven lakes filled with recycled water and stocked with a range of popular fish species.

The total area of the seven Santee Lakes and their surrounding walking trails is 190 acres!

Where can you stay near the Lakes?

The permanent residents of San Diego use the Santee Lakes campgrounds as their weekend escape. The area can accommodate several RVs(recreational vehicles) that are also known as motorhomes.

In addition, you can reserve a cabin for your family. There are 10 comfortable cabins to stay in for the weekend. Out of the 10 cabins, seven are on the lakeshore and three cabins are built right on the water.

Floating cabins are always sought after by the locals who also bring their guests.

There are no restaurants on-site. You have to make your own arrangements for food and drinks. You can either cook or bring home-cooked food.

Moreover, there is a general store on the site where you can purchase groceries, vegetables, fruits, and milk.

The local specialty is Mary’s donuts that are talk of the town.

What can you expect in a cabin?

What can you do in Santee Lakes?

Where is San Diego located?

It is part of Southern California shortly called “SoCal”. You may like to know that Los Angeles is also part of the SoCal and so as another 8 counties.

How to reach the Santee Lakes Floating Cabins?

San Diego is equipped with an international airport. However, people from the 9 counties nearby, come either in their own cars or in a motorhome.

From the city of San Diego, the destination is located only 30 km away, in the northeast direction.

You can find a truckload of details such as Cabin Faq, campground amenities, fishing, and events in their website.

Top 10 Tourist Attractions in Malaysia in...

6 Incredible and Unique Beach in the...