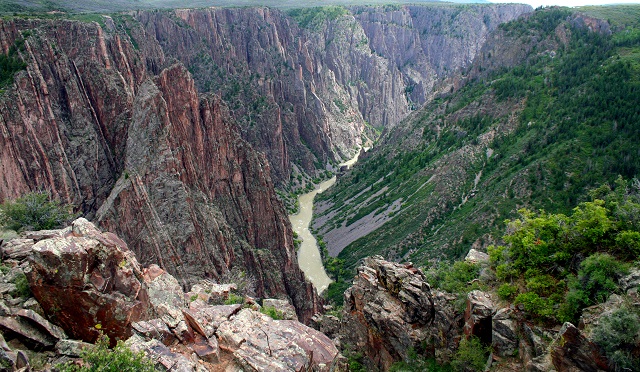 Where is the Black Canyon and what to see there?

A canyon is a rock formation that occurred naturally over thousands of years due to erosion and natural calamities.

Canyons are exciting to see. The rugged rocks extending from way below and spread over a large area is a natural wonder that never fails to attract us.

In addition, such wilderness that is untouched over several centuries makes way for the wild growth of trees and bushes. They serve as ideal habitats for a range of wild animals and birds.

Usually, one river is said to be the cause of the erosion of rocky mountains. In the case of this canyon, the Gunnison River is the culprit. You can see it flowing down, at the base of the canyon.

Where is this Gunnison National Park?

I must admit the name is not all that popular among us. Besides, I think even the majority of the native Americans may not be aware of such a canyon that they are otherwise fond of. I remember reading it is one of the least visited canyon in the U.S.

The Black Canyon is located in Colorado state in America. It seems Colorado is somehow situated in the center of vagaries of nature which is evident from the presence of several other canyons.

I think each of five these canyons must have been formed by five rivers, just like the Gunnison River is responsible for our subject canyon.

Which is the nearest city in Colorado to reach the Black Canyon?

Montrose is the nearest city that acts as the gateway to the canyon.

What a lovely backdrop of snow-clad mountains!  I read some of the television series that were shot in this city.

The canyon is still about 150 km away from Montrose city towards further west of Colorado.

Why it is called a Black Canyon?

Inexplicably, the deep gorge and the rocks are lit by natural sunlight for only about half a day.

Therefore, the canyon’s depth looks dark and eerie always getting the name ‘black’.

What is the depth of the black canyon?

From the topmost point of the canyon, the bottom is located 2700 feet down!

Do you know where the deepest canyon is and what is its depth?

Yarlung Zangbo Grand Canyon is the deepest canyon in the world. From one point at the top, the depth is measured as 17,500 feet!

It is located in Tibet.

Wildlife that lives in and around Gunnison National Park.

The Gunnison National Park is home to several species of deer such as elk and pronghorn. You can occasionally spot a huge black bear.

Bearing numerous crevices on the rocks, a few species of lizards live.

Among the birds, one bird is strikingly beautiful. It is the Steller’s Jay.

I cannot resist mentioning a few more birds that live in Gunnison Park.

This is the Peregrine Falcon, the world’s fastest bird.

In addition, the abundant fish species in the river attract several ducks and geese species.

Again, the rocky crevices are home to eagles, owls, falcons, and hawks.

Those who are driving a car are in for wonderful driveways that include the South Rim of the canyon, U.S. Highway #50, and the Colorado State  Highway #92. 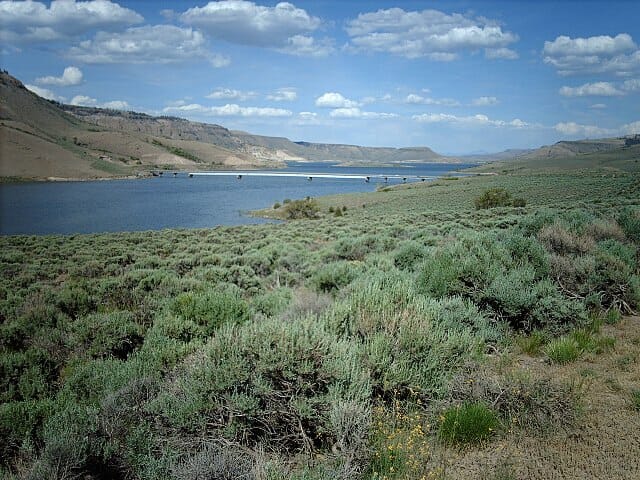 It is a popular picnic spot. Nature lovers opt to stay in canvas tents around the reservoir. Gunnison River is captured in the reservoir that is also known as Blue Mesa Dam.

The area around the canyon is known as a dark sky park of which I intend to write an article. There are several dark sky parks in the U.S. These are said to be the best spots for stargazing.

Fishing in the Blue Mesa Lake.

The attraction is the red colored fishes called “kokanee Salmon” that are also known as silver trout that the campers manage to catch. 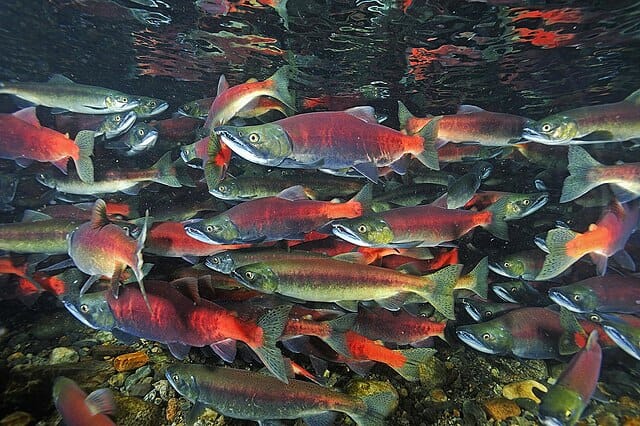 I think their brilliant color is a beautiful to look at.

Other places of interest in Gunnison National Park:

Of course, there is no dearth of hiking trails in such a large mountain range. The most treaded upon trail is the Gunnison Trail.

At some stretches of the Gunnison River, friendly rapids beckon kayakers who dare to navigate the furious river.

Are there places to stay in the black canyon?

Yes, there are hotels to stay near the black canyon. However, I would prefer to stay in a motor home near Blue Mesa Point where is an RV park.