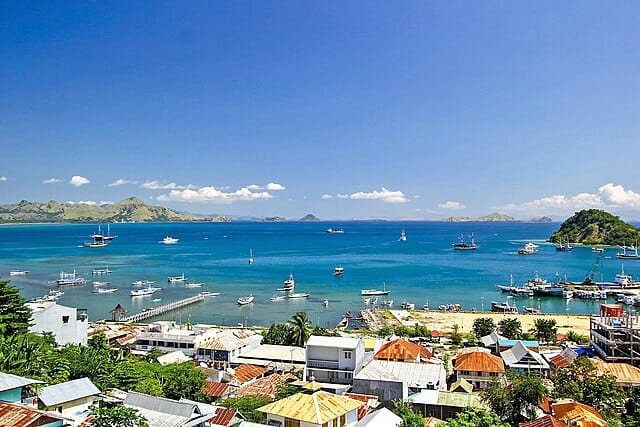 I am sure Flores is not among the highly visited Indonesian islands as much as Bali and Lombok Islands. Nevertheless, it is a must visit island in the Sawu Sea. Incidentally, Flores Island is the largest of Lesser Sunda Islands, Indonesia. On it is north lies the Flores Sea, a large sea covering a massive 240,000 sq. km

In the map above, you can see the small Komodo Islands to the west of Flores. Since it so close to Flores, Flores is the gateway to Komodo National Park. The majority of the travelogues to Flores always include a visit to the Komodo Island. I will also follow the trend.

If there is a ‘lesser Sunda’, there must be a ‘greater Sunda’-right? Four major Indonesian islands namely, Java, Sumatra, Borneo (partial only), and Sulawesi comprise Greater Sunda Islands.

Any avid traveler, especially to the remote islands must know the exact location of the island of visit, so that, he is able to compose his travel chronicles as accurately as possible. That’s why I am bit elaborative on this topic.

All these Sunda Islands are home to wonderful tropical forests, rain forests, swamps and marsh lands, alpine meadows, and lush mangrove forests. Such a diverse but thick landscape acts as ideal habitat to some of the world’s extraordinary flora and fauna.

Having concluded about the location of Flores Island among Indonesia’s Lesser Sunda Islands, we will move on.

How to Reach Flores?

In spite of its big reputation as a spectacular tropical island, Flores receives only domestic flights from other Indonesian main islands. Nonetheless, Bali Island is the gateway for reaching Flores.

From Bali’s international airport, you will land at Labuan Bajo, the western most tip of Flores. The flying duration will be 80 minutes. Labuan Bajo is the gateway to Komodo Island and national park.

However, if your main interest in Flores is its stunning Kelimutu National Park, you have to book a flight from Bali to Ende, a city in Flores.

Ferrying is an option but that is not chosen by wise men because you will spend nearly 33 hours on the sea!

Note: When you search with the keyword ‘Flores’, you will read about Flores in Indonesia. However, if your keywords are ‘Flores Island’, Goggle will show you information about Flores Island in Portugal. It is part of the Azores archipelago, an autonomous region of Portugal.

How many days are required to tour Flores and Komodo Islands?

If you can afford 10 days, it would be ideal to explore both these tropical and volcanic paradises on earth. Nonetheless, you can rush things up in a week also.

It is time to look into the list of attractions in Flores.

Seeing Kelimutu’s world wonder tri-colored crater lakes is the foremost things to do in Flores.

These are lakes that filled the three extinct volcanic craters. There is no laymen explanation why the colors are so distinctly different even though, the lakes are adjacent to each other. In addition, the color changes at unpredictable times and conditions.

The water is inviting us to take a plunge but we have to restrain our urges. We are not permitted to enter the craters as they are still dangerous.

Moreover, there is a local belief that the volcanic lakes are home to the departed souls.

It is another volcano in Flores, taller than Kelimutu. Thought it is an extinct volcano, no one dares to climb on it.

You are allowed to swim in this gorgeous blue water. If you take a photo of yourself swimming in the cave, it will be the photo of your lifetime.

It is a short boat ride away from Labuan Bajo fishing village in the western tip of Flores. In order to see the pool emits blue color, you have to visit the cave when the sunlight hit the pool. So, check with your hotel reception because time varies every week or so depending on the movement of the sun.

Can you believe it is a rice field above that is landscaped like a spider’s web? Naturally, it is one of the tourist attractions in Flores. However, few tourists take the pain to visit here because of the long distance. Even from Labuan Bajo, it is nearly 100 km.

Obviously, this national park is located in Komodo Island. It is 180 km west of Flores. You can reach the land of Komodo dragons in about an hour from Labuan Bajo by a flight.

Ferrying is another options but it takes a grueling two day voyage.

Your first aim is to spot the slow-moving Komodo dragons. There are many of them so you won’t have to wait for long to see one of the giant lizards.

It is said to be largest lizard in the world as of now.

The second big attraction in Komodo National Park is the most beautiful pink sand beach.

It is a world attraction that draws quite a large number of tourists.

If birds kindle an interest in you, look out for the following birds”

The lovely range of marine creatures in the waters of three islands is also wonderful to watch either by scuba divers or snorkelers.

Don’t brush aside this fact, buddy, as something you already seen it all elsewhere. Here is truly an exotic range of marine lives. To mention a few just to catch your attention:

Oh, this doesn’t look like an underwater creature at all! Isn’t it magnificent?

Do you accept all these fish species are new to you?

Scuba diving is a major water sport in Flores and also in Komodo Island due to an exotic range of incredible marine lives. There are exclusive diving location spread out on Flores that include Flores Diving Center, Red Whale Diving center Orca Dive Club.

Numerous boat tours are offered from Flores to nearby islands and diving locations.

Snorkeling is a highly recommended water adventure in Flores and other adjoining islands.

Flores is not on the tourist radar. Nonetheless, some 40,000 people come here every year mainly to see the blue grotto and the Komodo dragons. There are a few good hotels in Flores that include Golo Hilltop Hotel, Puri Sari Beachfront Hotel, Hotel Isla de Flores, Hotel Casa Amelia, and Hotel del Lago. The last mentioned hotel offers breathtaking views of the sea.

What should you find as the local foods on the restaurants’ dining tables?

It is an Indonesian snack shaped triangle. It is actually a sweet. Palm sugar is used as sweetener. The basic ingredient is rice and coconut milk.

It is a smoked pork.

It is a rice noodle that is dipped in coconut milk and eaten. The coconut milk is added with palm sugar but it is your choice to sweeten it or not.

To be frank, when I went through a long list of Indonesian specialties, I had no clue to them regarding the taste. That’s why I have curtailed my list. However, my impression should not be a judge of the taste and quality of the dishes. This is only my personal opinion.

Flores’s location amidst the Lesser Sunda Islands is strategic and acts as a convenient gateway to many more islands nearby such as Komodo, Sumba. I think three days are required to see all the attractions in Flores and Komodo National Park.