A Short Trip to See the Quechee Gorge Vermont 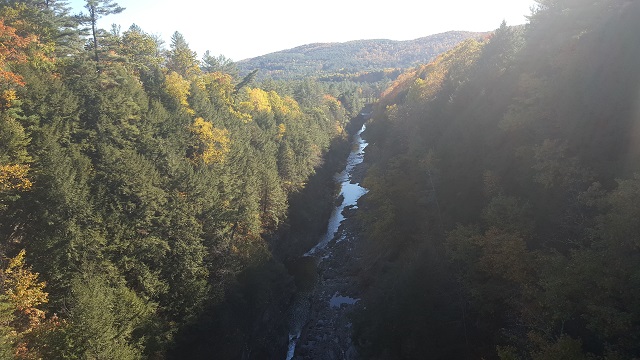 The sight of this deep Quechee Gorge is absolutely bewitching. I think acrophobiacs should not look down from the top edge.

Quechee itself is a new word to the majority of us. It is a village in Vermont, one of the United States of America.

What is known as New England in the United States?

On one side of Vermont is New York and on the other side is Canada.

A gorge, irrespective of its depth is not attractive to most of us. However, people like me, especially those who are observant, like these interesting geographical areas.

Gorges that are also called ‘ravines’ are part of a canyon whose side walls are rocks that are devoid of greenery. The sides of a gorge are invariably covered with thick flora and rare wildflowers.

Not many know that this stunning gorge is a highway attraction. It is located on U.S. Route # 4, between New York and New Hampshire.

Age of the Gorge:

Maybe this fact inspires me to travel to Vermont, just to see the gorge. It is believed to be 13,000 years old!

Depth of the Quechee Gorge:

The depth of the gorge is only 165 feet that may not instill giddiness even to the acrophobiacs.

Which river flows down at the bottom of the Gorge?

The river’s name is tough to pronounce “Ottauquechee River”. How ever, it is not a very long river, buddy; it flows only for 66 km. Besides, it is actually a tributary river of the Connecticut River the drains into the Atlantic Ocean, near Long Island, New York.

What can you do in and around the Quechee Gorge?

Onlookers of Quechee Gorge would take inflatables for rent and enjoy a thrilling session of river rafting in the Ottauquechee River that promises several rapids that challenge the courage of river rafters.

Our destination Gorge is part of the Quechee State Park. This is a major tourist attraction for adventure-minded people. For them, camping close to the gorge is available.

During the daytime, the campers go for guide-free hiking to explore the unexplored flora and fauna. When the snow arrives, Vermont becomes a big skiing area.

As many as 45 tents are available that you need to book in advance. In addition, there are parking spaces for motorhomes.

If you are afraid of swimming in running water, naturally, you won’t participate in rafting sport. The only alternative is to do some fishing. However, I think you have to bring your angling gear. They are not rented at the site of the gorge.

There is no escape for you; you have to go to this restaurant not only to answer your hunger pangs but also to look at the Ottauquechee Falls.

Whichever table is available when you go there will give a view of the waterfalls.

The food is said to be fresh and pure as it is a village on the highway. I trust highway diners. They serve delicious food, much to our surprise.

There is a sprawling antique mall in the Quechee village. The size of the gift shop is quite impressive for a small village on the highway. This indicated the high volume of tourists to the Quechee Valley.

Antique dealers from all the six states of New England have put up their stalls, thus making it difficult for you to decide on your wish.

Having known that the gorge is only 165 feet deep and there is a lovely river f=down there, you have to get to the bottom of the ravine-right? Well, there are a few trodden trails through which you can reach the river.

Even though the bottom of the ravine is only 165 feet, the trails are winding down and it will take almost an hour for you to touch the river.

The trekking trails start from the Quechee Valley bridge that also acts as an observation platform.

The waterfall is at a touching distance.

This is a cheerful attraction for all age groups. Having seen the various colored foliage and the attractive waterfalls, it would be an added excitement if you pay up for a hot air balloon ride.

Unlike flying in a caged plane, riding in an open balloon’s drift is truly thrilling. Unlike flight traveling, You will really feel moving in the air.

To conclude, Quechee Gorge can be an outing for those living in Vermont. Residents and tourists to the other five states of the New England region may not take the trouble of driving up to Quechee village.

Alternatively, those who are driving through the U.S Route # 4 from New York to New Hampshire would definitely stop on the way to spend some time looking at the gorge.