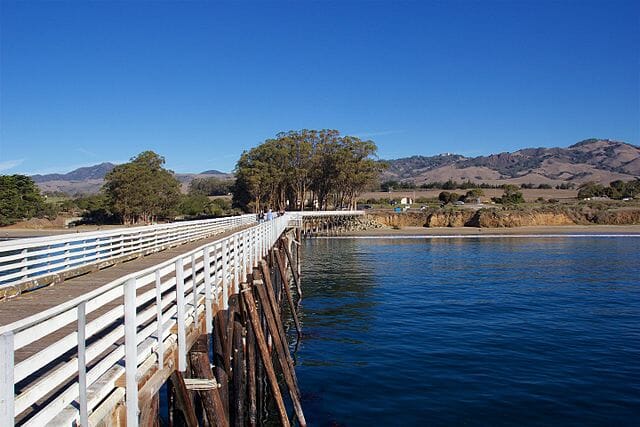 Beaches in the world vary largely based on the geography of the country or state. Even a single island that is surrounded one ocean or sea will sport different coloured sand beaches. While on one direction, there may be boulders while the rest of three directions are devoid of rocks. Let us know top 10 beaches in California State.

In the United States, the beaches on its west coast are the most visited vacation spots. I think the giant Pacific Ocean commands that effect all over the world.

When families or just-married couples choose a beach destination for their holiday or honeymoon, what do they intend to do there? Or, what exactly they expect in a coastal city that will engage them fully.

These and many more water adventures engage anyone in a beachfront destination.

In the U.S. the beaches in California are extremely popular among beach lovers all over the world. Can you believe if I tell you people even from Hawaii love to holiday in the Pacific coastal towns along the Californian coast?

10 Most Beautiful Beaches in California:

In this article, you will come to know the top 10 beaches in California State.

This is an example how a beach in Malibu would like during spring. I never visited Malibu, but I am very familiar with it and all its beaches from the fictions that I have read. I know Malibu is only for the rich and famous, the bold and beautiful of Los Angeles, the capital of tinsel kingdom.

Every beach in Malibu will beg you to stay from morning till sunset. The climate is always friendly in Californian beaches.

The added attraction of Malibu beaches is the backdrop of Santa Monica Mountains.

Malibu is not very far off from the city of Los Angeles. Just 50 km separates the two.

The Malibu beach area stretches to 34 km. Some of the highly visited beaches in Malibu are:

Other popular attractions in and around Malibu include:

I mean, film stars and celebrities spotting is a favourite pastime in Malibu.

Even during the peak summer, the average monthly temperature will be 22 degree centigrade. That is equal to 71.6 degree in F.

Wow! What a friendly weather to spend in a beach town!

Yes, there is a Venice here in Los Angeles, California. It is one of the popular Californian Beaches.

The star attraction in Venice Beach is the promenade (boardwalk) that is 4 km long. The entire stretch is busy with vendors, and street artists that perform various skills.

You can see them perform music, acrobatics, singing, and even fortune-tellers are hired occasionally by the pedestrians. 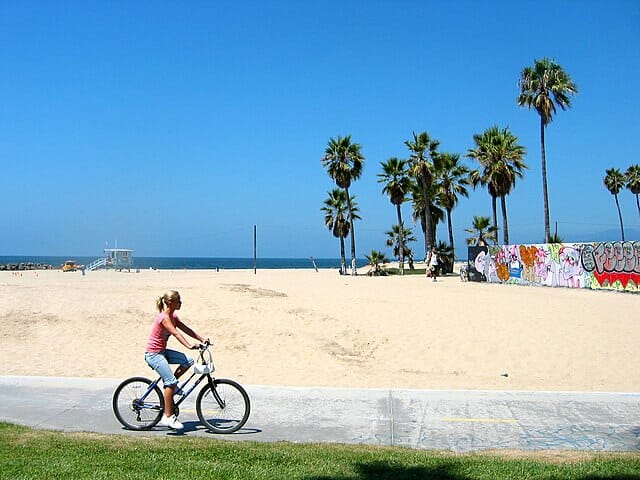 I think visitors even forget about wetting their in the Pacific Ocean and get mesmerized the hustle bustle of the promenade.

Just when the sun starts dipping behind the horizon, every head will turn towards the ocean and stand with open mouth to watch the spectacular sunset. It is a dreamy scene.

Pier at the Venice Beach

Isn’t it breathtaking; I mean, the 400-meter walk on the fishing pier and the Pacific Ocean.

Surfing is passionately pursued in Venice Beach, near the breakwaters that you will at the beginning of the video.

In addition, there is a skate park that is not far away from the Venice Beach. More children are seen enjoying their skating session than elders.

From the late afternoon, the coffee shops, beer bars, ambiance-filled restaurants, tattoo parlours get busy. It is no wonder, this beach in California receives over a million visitors every year.

I am sure you might have heard of Santa Monica Bay in California. It is a big touristy place that is thronged by myriad tourists who are looking to pursue relaxed angling, snorkelling in the afternoon, cycling along the Redondo Beach, and some veterans enjoying scuba diving in the ocean.

Here is also a pier where you can stroll for a breezy 30 minutes, allowing the salty wind through your hair. Such freedom you don’t get where you live.

Hopkins Wilderness Park lives by its name, offering sprawling meadows, a small play area for kids, and a mini jungle with a pond in the center. It is an idyllic place to unwind.

Redendo Beach is also part of the Los Angeles, in the South Bay region. It is known for offering ideal wave conditions for surfing that Californians are fond of.

The area is loaded with bars, and high-end restaurants.

The long pier built on the Pacific Ocean is the happening place in Manhattan Beach that located close to Redondo Beach. It is also part of the Southern bay region in Los Angeles. 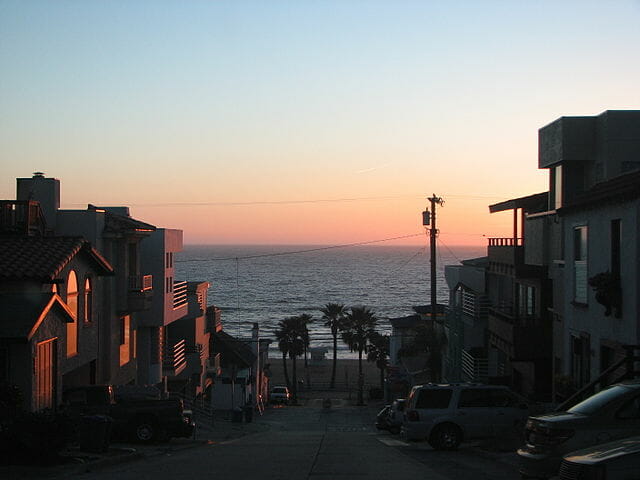 What a place to live!

As many as 4 million people visit the Manhattan Beach every year.

Along with wave surfers, newbies enjoy a session of bodyboarding, which is also equally thrilling like wave-surfing.

You must be wondering why I pasted the picture of a beautiful, fully grown Monarch butterfly here. I did not do it by mistake.

So, these winged creatures are an added attraction for the Californian beach.

The second big attraction is the opportunity to taste the popular California wines. There are several wineries nearby. I remember catching a glimpse of an attractive phrase, “Wine and waves”.  Nice-eh? It fits the description of Pismo Beach City.

The long pier extending into the ocean act as an observation platform to watch the famous Californian sunset. This is the third attraction of Pismo Beach.

The fifth attraction of Pismo Beach is also an important one. It is known as the ‘clam’ capital of the world. Clams belong to the species of a mollusc, and they are edible. Not only the humans eat the clams but also the Sea Otter.

Finally, the Pismo Beach somehow got popular among surfers.

Rated highly among the best beaches in California, it justifies the rank with its alluring beauty. I read about the city’s inclination towards fine art and its wish to host a few art festivals that include Plein Art Painting competition, Sawdust Art Festival, etc.

Laguna Beach is the jewel of Orange County, a community of elite and also very populous. In recognition of the diverse marine life, the Laguna Beach sits safe inside the state Marine Reserve.

Because of its surfing popularity, it attracts over 6 million people every year. I suppose the large number includes not only the surfers, but also their family members and other onlookers.

It is a city in California State that is famous not for a single beach but 5 beaches!  Out of the five beaches, I liked the Pebble Beach the most.

This Californian Beach is in Monterey County that is known for several picturesque golf courses.

Can you guess the number of golf courses in Pebble Beach? There are 8 golf courses, and they are the sole reason for the Pebble Beach to get a ranking among the top 10 beaches in California.

This is sheer rugged beauty. Big Sur is part of the Central California coastal region, and its intrinsic beauty is because of the St. Lucia Mountains.

The unspoiled beauty is highly protected by the Government. Imagine the view of the Pacific Ocean for the ardent hikers. The mountain slope sports numerous Redwood trees.

Road trippers from all over the world make it a point to drive through this stretch of California State Route #1, at least once in their lifetime.

The Big Sur part of the most scenic highway in the world is only 114 km that you wish you traverse it in a slow two hours.  This short stretch is known as Carmel-San Simeon Highway. The view of the oceans will make you wonder why you can’t live just on the road, overlooking the Big Sur.

The most unforgettable part of your car ride of this Californian Beach is when you drive on the breathtaking Bixby Creek Bridge.

Watch a short video below of the Bixby Creek Bridge.

Do you think I should have ranked the Big Sur on the top of my list of best beaches in California?

If you are lucky, you will open your mouth wide open when you watch a thick roll of advancing towards the beach from the ocean. It is the sight of your lifetime.

Another rugged coastal beauty in California is the Black’s Beach, La Jolla. Please note, La Jolla is part of San Diego, one of the big cities in California.

It is otherwise also popular as a ‘nude beach’.  The beauty of this beach lies in its arduous approach. You have to climb down a staircase of 300 steps built on the Torry Pines.

I read San Diego has numerous beaches that are worthy of visiting. I will cover them in a separate article.

To visit these top 10 beaches in California, I think you have to rent a car for a few days.

8 Accommodations That’ll Appeal to Your Inner Cowboy or Girl

Top 6 Ancient Temples in Egypt You...