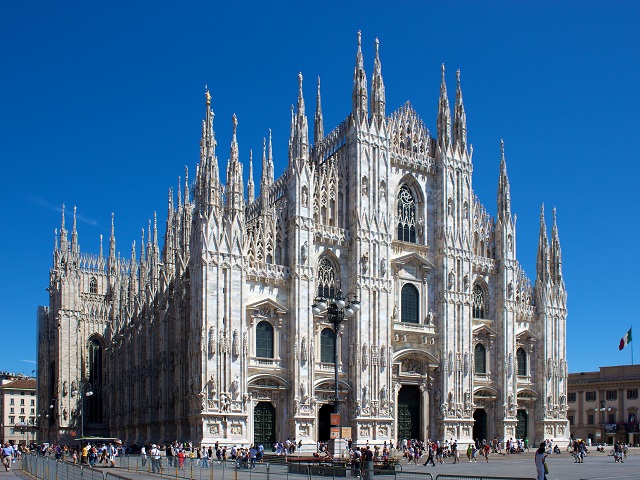 How to avoid the long queues in front of the churches in Rome?

In this blog post, I will show you some mind-blogging churches in Rome and in a few other places in Italy.

Rome, the world’s foremost authority of Christianity and the most visited pilgrimage center by the Christians has a whopping 900+ churches, chapels, cathedrals, and basilicas.

Speaking about churches, I will also take you to several immaculate cathedrals, basilicas also.

Before proceeding further, I will explain the basic differences between a church, a chapel, a cathedral, and a basilica.

A church is a place of worship headed by a priest. Though the congregation also points to a church, a church is generally a building meant for the Christians to assemble and listen to the speeches of a priest or a pastor.

Generally, churches may not be grand buildings as that of a cathedral or a basilica but there are some exceptions. Some churches can boast superb architecture.

A chapel, also a place of worship by the Christians.  it won’t be headed by a priest. A chapel is more of a temple but the size of a chapel will be smaller than a church.

You might have seen photos of Jesus or Mary in hospitals for the relatives of the patients to pray. Such places also fall under ‘chapel’.

A cathedral is a bigger church that can accommodate more people and usually headed by a ‘bishop’. At some places such as a small town, a cathedral will be much smaller but it is still a cathedral because it is the seat of a bishop.

Basilicas are governed directly by the Pope.

In a few places around the world, cathedrals awarded the status of basilica minor due to some historical or spiritual importance attached to the church or the place.

When you go inside a historical church or cathedral or basilica in Rome, you become part of the thrilling history. You will get goosebumps when you think of where you are standing. The Basilicas in Rome will make you feel pious and important.

10 Beautiful Churches in Rome You Must Visit

Let us begin our tour of imposing churches in Rome starting with the St, Peter’s Basilica. 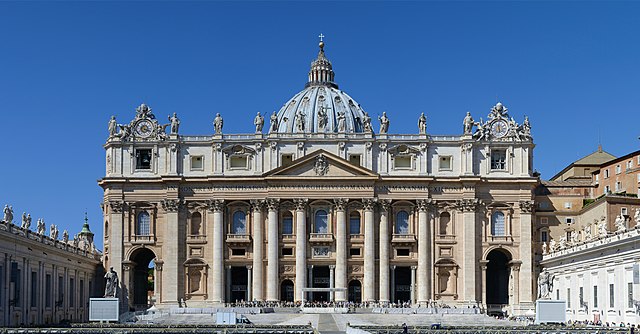 Don’t you feel like rushing inside this church in Rome as soon as you see this magnificent building? The architecture of churches in Rome is matchless. In addition, they stand tall and embedded in the history of the world’s classiest buildings.

This is the world’s largest church and also the holiest of all the churches in the world. St. Peter’s Basilica built in the Renaissance style of architecture that always like by every one of us. It is a compulsive attractor wherever they are.

This sprawling basilica is located in Vatican City in Rome. The large piazza in front of the basilica is a place for assembling and socializing. 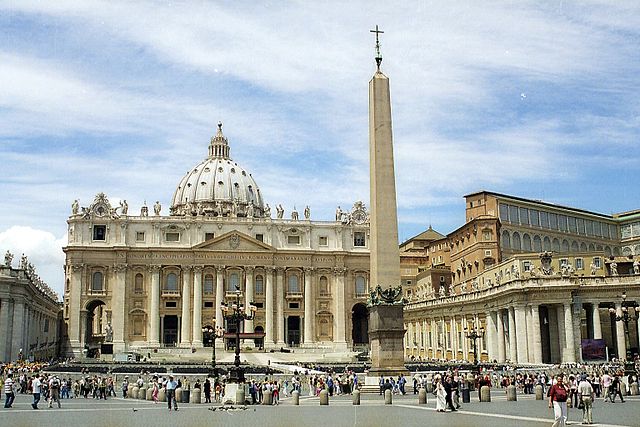 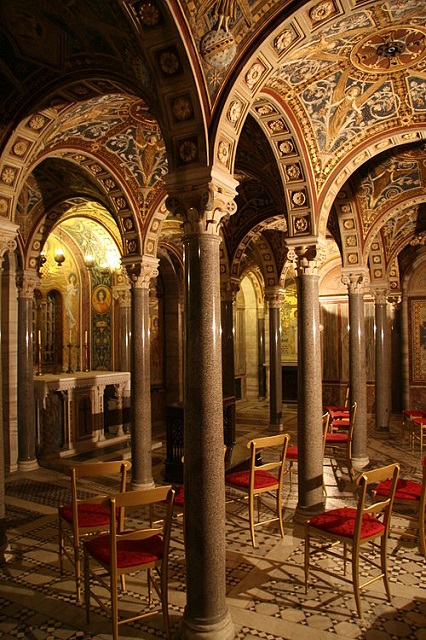 This beautiful church in Rome is located in the neighborhood of Trastevere, Rome. It is believed the church was built in the 3rd century A.D 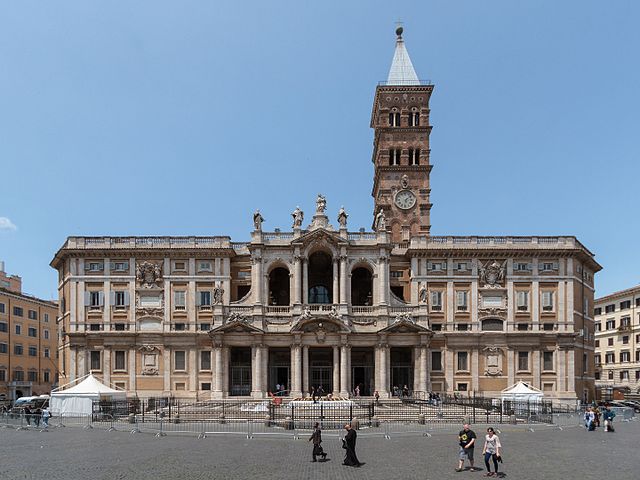 In spite of being a basilica major (Pope is the head), this church in Rome is not in Vatican City but in Rome. It is ranked as the largest of Marian churches in the world.

The sacredness of this basilica is so much revered that it holds a mass gathering on all days of the year. Do you know that this mammoth practice has been followed for 16 centuries!

The interiors of the basilica have withstood the vagaries of 1600 years. The hall looks sprawling and majestic.

Roman architecture’s supreme example can be seen in this spectacular church in Rome. 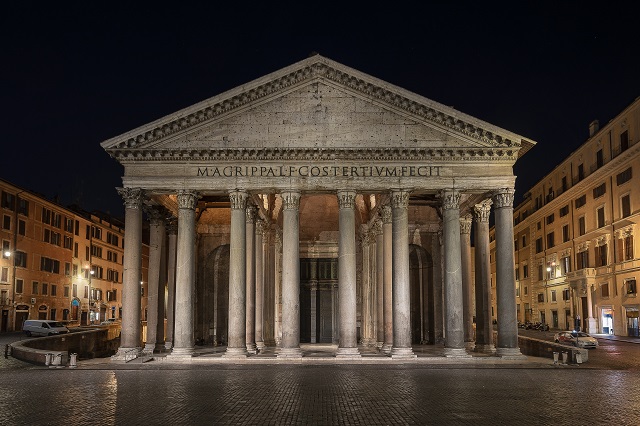 Does it look familiar to you? The Pantheon is familiar to the majority of us even though, we may not be aware of its name and place.

Pantheon is one of the most exhibited buildings in movies, newspapers, and magazines.

Look at how the Pantheon’s interior is built. 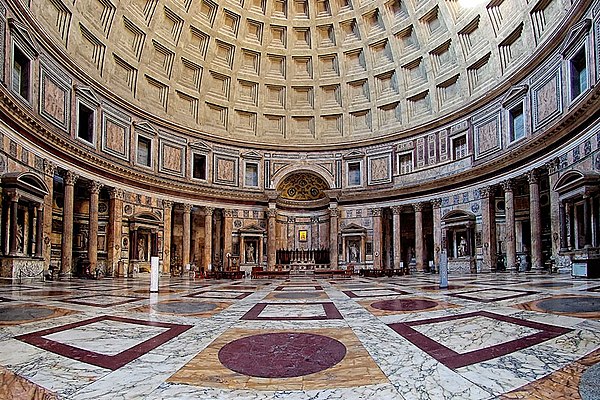 Awesome! The circular dome, the high ceiling, and the tall granite columns are the true identities of Pantheon, one of the splendid Basilicas in Rome. It is awarded the status of the basilica (Basilica di Santa Maria ad Martyres).

The beautiful dome is the center of attraction for the tourists who can be seen straining their necks by looking up at the ceiling for several long minutes.

Here is the dome of the Pantheon seen from a distance. 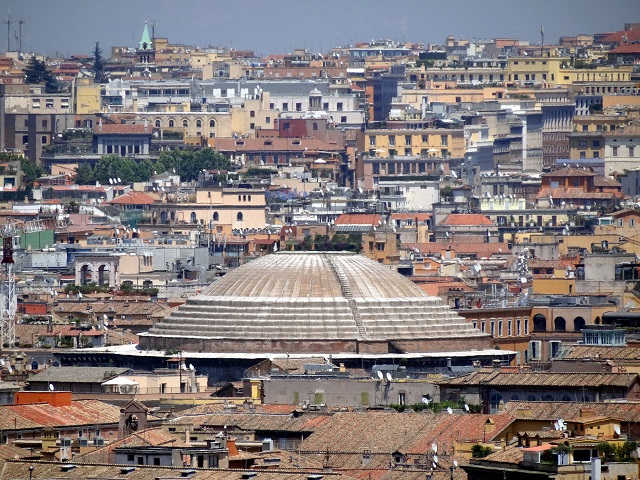 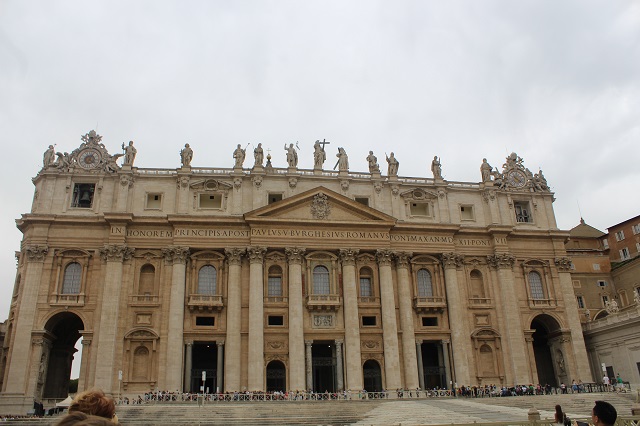 This most important place of worship for the Pope is located with Vatican City’s Apostolic Palace.

Not many of you are aware that the Apostolic Palace is where the Pope resides.

Apart from being a chapel (place of worship), the Sistine Chapel, the place where a new Pope usually elected.

The interior of the Sistine Chapel is incredibly beautiful. One of the chief contributors to the beauty of this church in Rome is the celebrated Michelangelo.

How to skip standing in the long queue?

These five highly visited Basilicas in Rome thronged by the tourists from as early as 8 am. However, You may have to wait for a couple of hours to get inside each of these popular tourist landmarks in the Vatican and Rome.

Is there a way to avoid the long lines of people?

There is a guided tour named “Discover the Vatican on a tour of St. Peter’s Basilica, Sistine Chapel, and the Vatican Museums”.

The expert guide knows how to skip all the entrances and take you directly through the important places and gallery halls.

To know how much it costs to join the ‘Skip the Line Tour’.

Watch a video of these most useful Vatican travel tips. 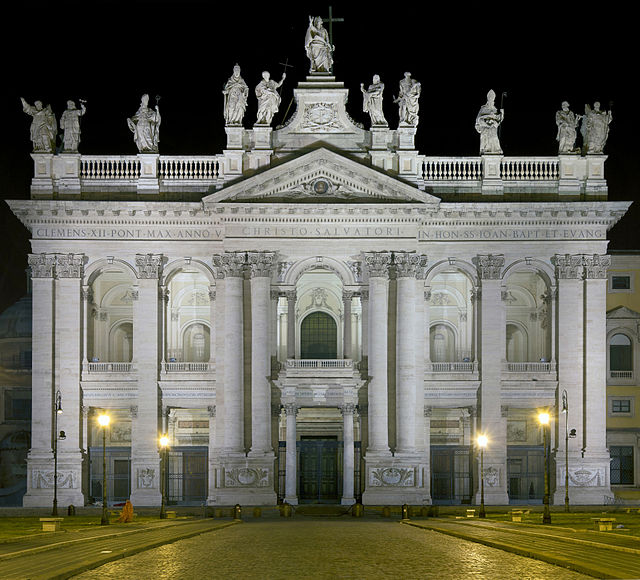 What a spectacular church in Rome! It is not just a church but also the seat of the bishop of Rome. Being the oldest church for the people of Rome, it has earned the status of Basilica Major and called the Lateran Basilica.

Among the four Basilicas Major, the church of St. John Lateran ranked at the top and prestigiously called the ‘archbasilica.

This basilica major is located in the city of Rome. 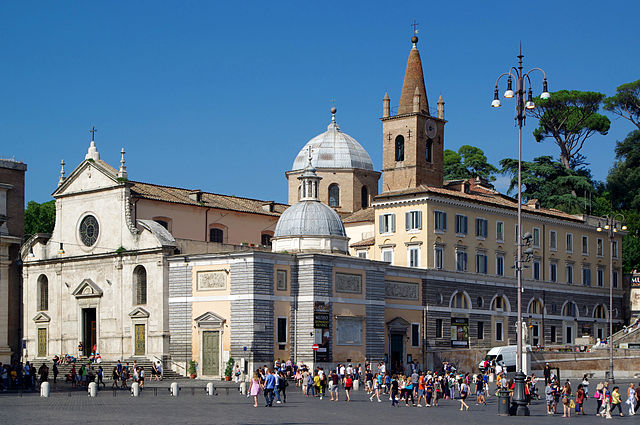 This is a basilica minor with an imposing interior that will make you gasp.

Just outside of this church in Rome, is the sprawling Piazza del Popolo, a place for public gatherings. Such squares for people-watching called the ‘piazzas in Italy whereas, in other parts of the world, they named ‘squares’ irrespective of their shape. 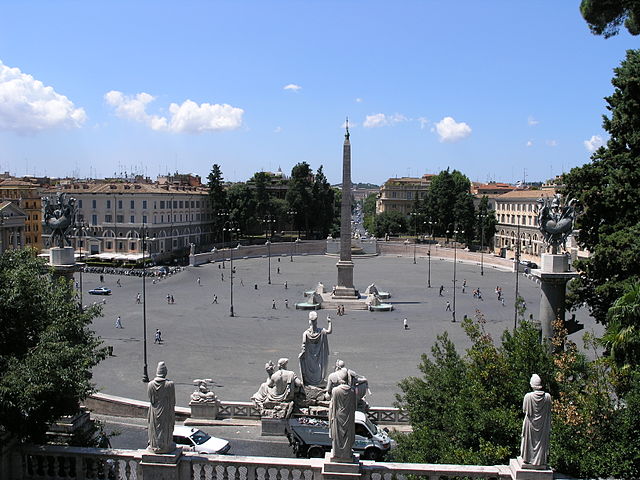 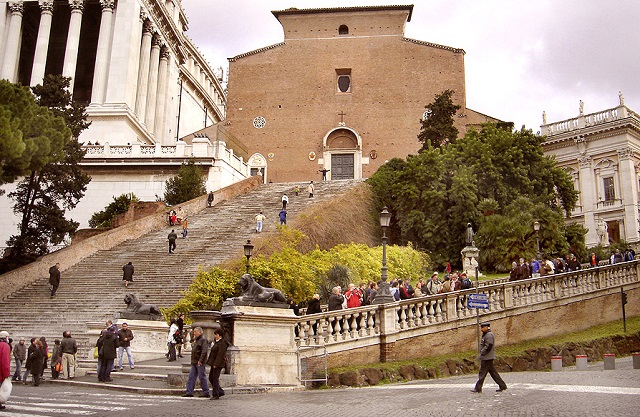 A church looks immaculate if it has several steps leading up to the entrance and the steps should be long and broad. In addition, this church in Rome is a fine example.

This minor basilica houses the relics of Saint Helena who was the mother of the celebrated Roman Emperor Constantine. 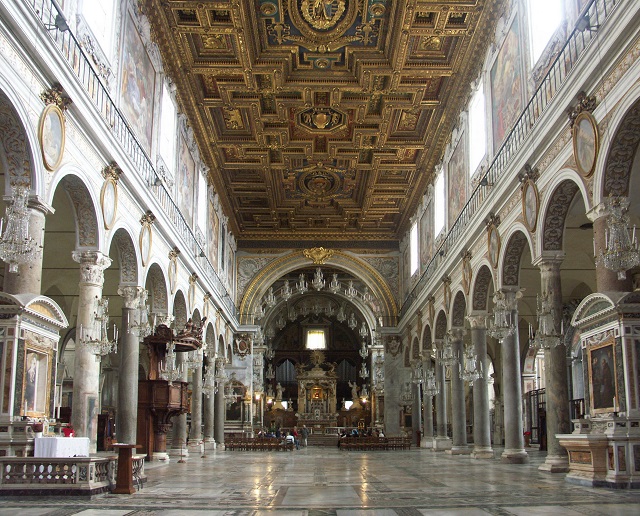 Shining interior of the church.

This masterpiece architecture is located in Rome, the headquarters of Christianity.

These eight churches are in Rome and Vatican. The following two extraordinary churches are located in Milan and Venice. However, I am dumbfounded by looking at the two spectacular churches in Italy. 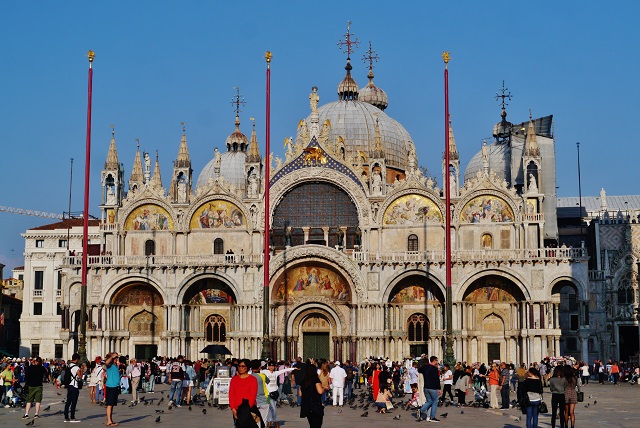 Enlarge to view the building and appreciate the golden frescos. The architecture is of Byzantine style..

Duomo of Milan also known as the Milan cathedral. Besides, It is a minor basilica of Milan, the capital of Lombardy, a province of Italy.

The revered archbishop of Milan is the head of the Milan cathedral.

However, You must know two unique facts about this fantastic church in Italy.

Please take a look at the Milan Cathedral in 1838. 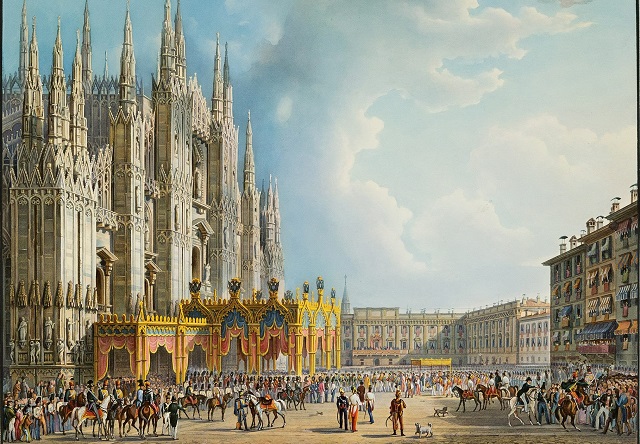 Incredibly beautiful! We should be lucky to see these churches in Italy.

Who knows what more surprises the city of Rome has in store for us as it has a mind-boggling 900 churches, cathedrals, chapels, and basilicas.

Three more churches in Italy that I intend to cover in detail in another post are: