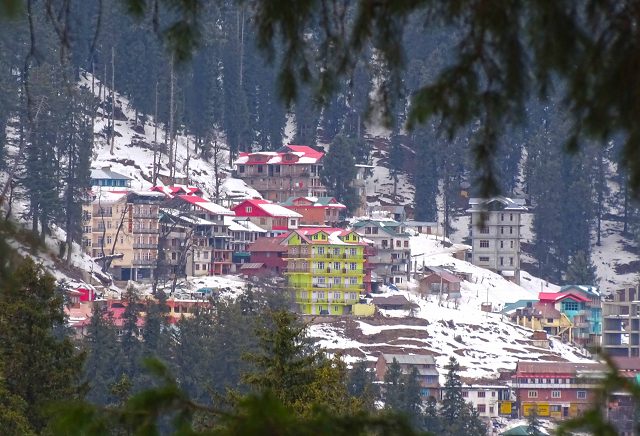 The name Narkanda would not ring any bell to the majority of the Indian tourists who otherwise love hill stations than any other countrymen.

This is a travel guide to Narkanda hill station that is also known as Narkand, a beautiful hill station and ski resort in the State of Himachal Pradesh, India.

Narkanda is a hill station that turns into a sought after ski resort during winter when the whole area is covered in thick snow. Narkanda is located at an elevation of nearly 9000 feet in Himachal Pradesh. The highly popular Shimla hill station is about 75 km away on the Indo-Tibetan road.

How to reach Narkanda?

Since Narkanda hill station is located close to Shimla, one can always reach Shimla and then go to Narkanda by car. However, the quickest way to reach Narkanda is by road from Kalka that is located about 30 km from Chandigarh.

If you still prefer to enjoy the toy train ride to Shimla from Kalka, you can do. It will be a memorable journey. 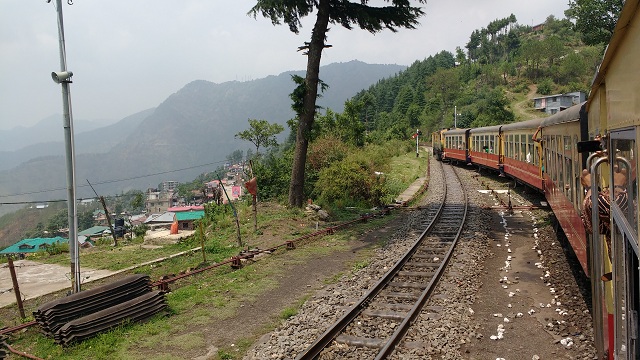 Once you reach Shimla, hire a car and travel to Narkanda hill station. The distance between Shimla and Narkanda is 90 km.

The nearest airport is Chandigarh. New Delhi airport is also another option. In fact, it is a better choice for international travelers.

Since Narkanda is located close to 9000 feet in the Himalayas, you can visualize a picturesque setting surrounded by tall and snow-clad peaks and the ubiquitous fir trees. Other tree species that are seen in large numbers in Narkanda hill station are:

The air will be cool always and the smell of mountain air is invigorating.

Narkanda being a summer escape has several tourist attractions that we will see one by one below.

The Hatu temple will be an instant attraction as soon as your eyes fall on it. 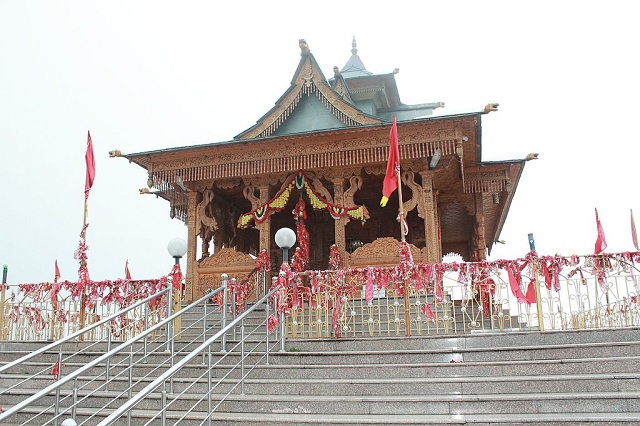 Whether you visit the temple to worship or not, just reach the top and look around, The view will be simply breathtaking. I believe the Hatu temple’s site of construction was carefully chosen mainly to offer the visitors a stunning view of the Himalayas. 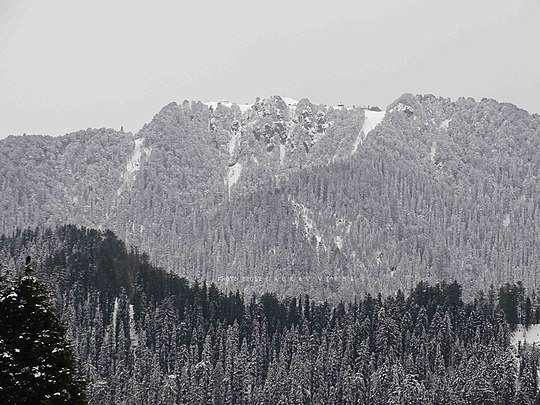 The Hatu Temple is dedicated to Hatu Mata. The locals visit the temple frequently. 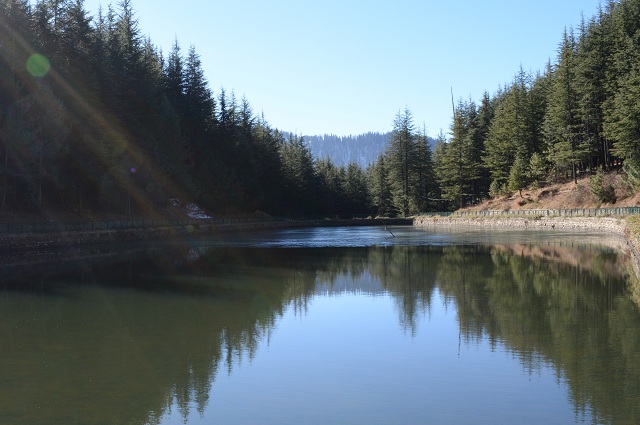 This beautiful alpine lake is surrounded by pine and fir trees that are the identities of Himalaya at this height of over 9000 feet!

The water looks clear and calm.

The Tannu Jubbar Lake in Narkanda is a big tourist attraction. Tourists flock to the pristine picnic spot and spend at least an hour or so, walking around the lake and hiking through the eerily silent pine forest.

Your trip to any Himalayan summer retreat is incomplete if you don’t visit an apple orchard that are several in any Himalayan hill station.

In Narkanda hill station, the must-see apple farm is the Stokes Farm.

Enjoy the freshest apple by biting into the juicy Himalayan apple when you are in Narkanda’s Stokes Apple Farm that is located at about 15 km from Narkanda town.

Shop for a bag full of apple jams and wines sourced from fresh Himalayan apples.

The trekking trail itself is very scenic and you will walk through pine and oak tree groves that stand tall and silent. A gentle embrace from you or a soft ‘hello, I love you’ would make the Himalayan trees very happy. After all, they have been living there lonely as ever; a bit of a company would make them glad.

India doesn’t boast of too many skiing places. Nonetheless, whatever India has in Himachal Pradesh and Kashmir, are all very attractive and offer skiing trails for both beginner skiers and veterans.

Next to Auli near Badrinath, Narkanda hill station is regarded as a good ski resort. After the snow covers the large tracts of the Himalayas after December 20th, the enthusiastic skiers happily camp at Narkanda.

Skiers usually stay at Narkanda ski resort for a whole week. After their exciting skiing sessions, they go trekking on the Himalayan hills that surround Narkanda.

The skiing lasts until February end when the snow stops falling and the existing snow starts melting.

There are several skiing trails and the one that starts at Hatu Summit (11,000 feet) is the most challenging for the experienced skiers.

Watch the skiers in action at Narkanda ski resort:

All sorts of skiing gears are available for rent at Narkanda ski resort excluding personal snow sports accessories such as snowshoes, windcheaters and sweaters.

The popular Himalayan hill station Kufri is located about 50 km from Narkanda.

You can plan a day trip to Kufri from Narkanda and see the following tourist landmarks in Kufri: 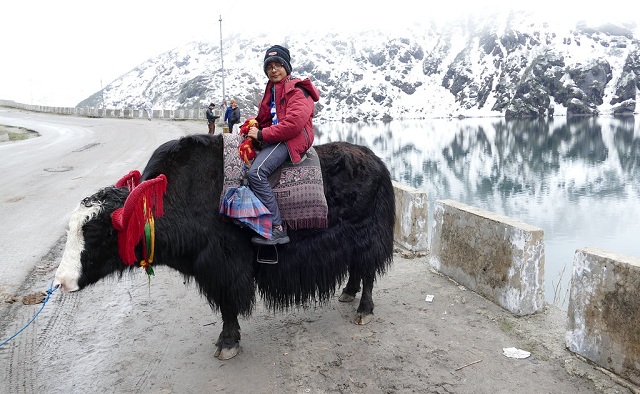 Hotels and resorts to stay in Narkanda.

Narkanada hill station is less crowded because its neighbors Shimla, Kufri, Manali, and Kulu Valley gather all the limelight.

Therefore Narkanda gets tourists only from the spillover from nearby popular summer escapes due to lack of accommodation.

However, the ski resort in Narkanda draws a high number of skiers from various parts of India, SriLanka,, Taiwan, and China.

To meet their demands, there are a handful of luxury resorts in Narkanda, the names of some of them are mentioned below:

If resorts don’t fit into your budget, you can opt to stay in hotels that are far less expensive.

Hotels to stay in Narkanda:

Apart from these hotels and resorts in Narkanda, there are a few homestays and farm stays.

If Himachal Pradesh is totally new to you, it is better to buy an all-inclusive tour package to Narkanda from one of the several reputed Narkanda tours and travels operators.

Some Resorts  that offers a package tour to Narkanda.

Most of the Shimla tours arrange a day trip to Narkanda. I think it is a wise decision to buy a Shimla tour plan and also see Narkanda in a day since there are not too many things to do Narkanda hill station.

Best Bars in Rome that you should visit

Can You See All Of Venice In...