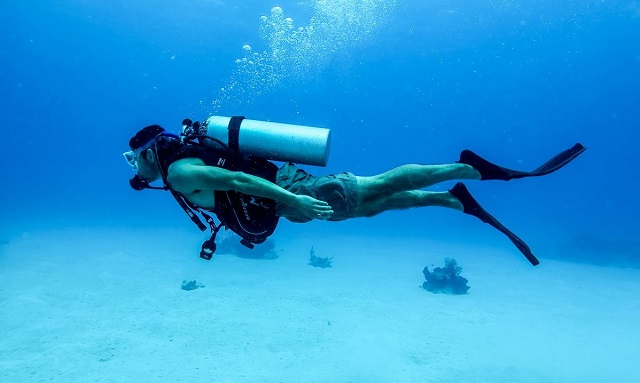 This is the summer season. Summer escapes not only means going to hill stations to cool your heels. Vacationing in exotic and remote islands or staying in a tent on the shores of a great lake will also give you relief from the summer heat. Another summer escape means is go for a ‘scuba diving’ stint. Here are the 10 Best Scuba Diving in the World.

Do you know what exactly scuba diving is?

The SCUBA makes the diver breathe easily without depending on a supply of air from the surface above the sea.

Divers go underwater for different purposes that include: 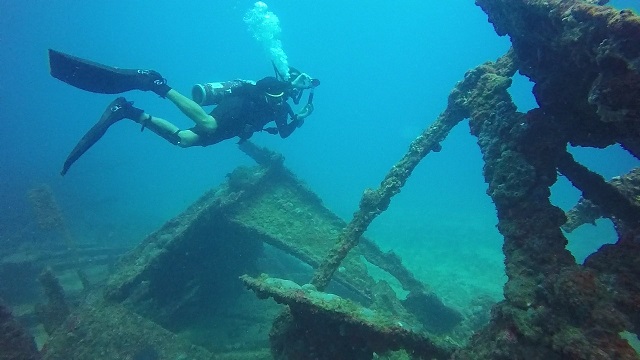 So, whatever may be the reason for a scuba diver to go to different best scuba diving in the world, scuba diving is an exciting adventure to indulge in.

Bermuda Triangle has to occupy the first place in the list of best scuba diving in the world as it is the mysterious place of shipwrecks. Shipwreck exploration is the biggest attraction for scuba divers.

In addition, somehow the shipwrecks attract marine creatures too. They swarm the place in great colonies.

This would give an opportunity to the scuba divers to study them up close.

The bottom of the ‘great blue hole’ lies at 410 feet only but its diameter (because the blue hole is in a circular shape) measures a full kilometer.

This natural sea cave was formed due to glacial activities thousands of years ago.

To reach this spectacular scuba diving spot, the divers have to travel by boat from Belize City. The distance is 70 km from Belize.

The sea is crystal clear and that is liked very much by all the scuba divers.

The marine-life off the coast of Belize is rich and so too the marine flora.

See the underwater of Blue Hole in the eyes of a scuba diver in the video clip below.

Scuba Divers, especially the learners and novices choose a scuba diving place based on the availability of a PADI (Professional Association of Diving Instructors).

I think in every popular scuba diving spot in the world, you can seek the help of a professional diving instructor.

Gili Islands in Indonesia, near Lombok Islands, are favorite places of scuba diving by both veteran divers and learners.

The reason for the favoritism is the sea conditions that are conducive to scuba diving and incredible underwater flora and marine life.

All the three islands of Gili are thronged by passionate scuba divers, mostly during summer when the water is cooler at depths.

Gili Trawangan, Gili Meno and Gili Air are the three islands in Indonesia.

Divers find the colorful reefs very pleasing. I believe there is also a shipwreck that invites experienced scuba divers.

In addition, the Gili Islands are called the ‘turtle capital’ of the world.

Scuba divers are taken to a few good diving points such as  Shark Point, and Manta Point.

Scuba divers cannot go on their own about their business in the Gili Islands. They have to approach a PADI approved shop to rent scuba diving gears and engage a professional diver to accompany you underwater. 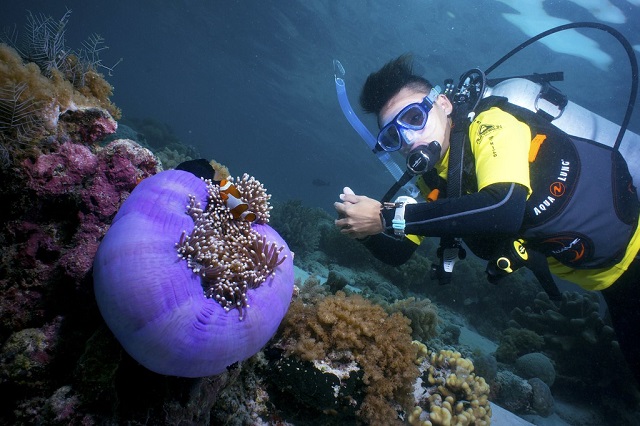 What a colorful marine flora! It is no wonder Sipadan Island is one of the best scuba diving in the world.

A unique feature of Sipadan Island is its elevation. It rises nearly 2000 feet from the seabed!

That’s the main reason for scuba divers to flock to this Malaysian Island in thousands. They start arriving this month (April) and the last of the scuba divers leave the shores of Sipadan Island in June end.

Captivated by the marine species, Sipadan was included in the golden list of Scuba Diving Magazine as a top dive destination in the world’.

Divers swim fearlessly with several species of sharks that include:

What a range of colorful fish! This is the ultimate sight a scuba diver would be looking out for.

There are 6 beautiful islands in the Bazaruto Archipelago, Mozambique.

All these six islands comprise a magnificent marine national park. What more can an avid scuba diver want!

If you can identify some of the exotic marine life such as reef fish, Moorish idols, honeycomb eels, manta rays, you can spot them as you stay deep near the ocean floor.

Mozambique islands are getting increasingly popular among divers as one of the best scuba diving in the world.

Did you notice the rich corals and schools of colorful fish? Most of the Andaman and Nicobar Islands are very rich in marine life that is a big attraction for scuba divers.

Havelock Island is located some 40+ km from Port Blair, the capital of Andaman and Nicobar Islands that belong to India.

About ten different diving spots in Havelock Islands are favorites among scuba divers.

The best time to go diving in Havelock Island is from October to March. Along with Havelock Islands, the nearby Neil Island also is included in the list of Best Scuba Diving in the World.

The island is part of the Ritchie’s Archipelago and is located between Peel Island and Neil Island.

These beautiful blue fish and white fish may mean nothing to us but ask a scuba diver and he will go articulate for the next 15 minutes.

Maldives Islands are perennial holiday destinations. The holidaymakers include hundreds of scuba divers. For them, the favorite scuba diving spot is known as Maya Thila. It is part of the North Ari Atoll.

Atolls are circular shaped islets. North Ari atoll is not a big one with just about 250 feet in diameter. Even the depth is not too scary sits at 130 feet.

The marine life in the Maldives and the long beaches are the sole reason for the scuba divers to throng the tropical islands of Maldives, one of the ideal Best Scuba Diving in the World. 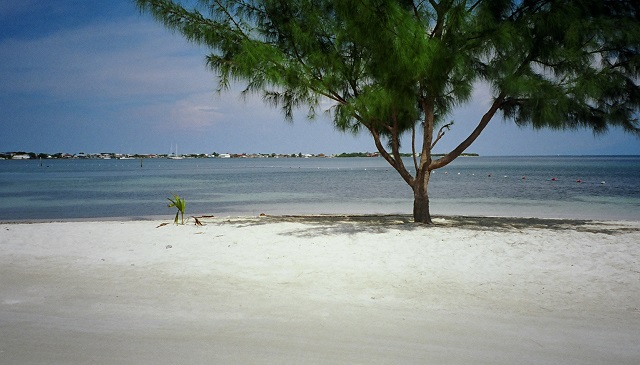 Do you know where Honduras is? It is located in Central America.

Surprisingly, Utila is the smallest of all the Bay Islands that are located near the coast of Honduras.

Utila Island attracts a big crowd of scuba divers who can’t have enough of seeing the rich corals off its shores.

Crete is a very large island that belongs to Greece. Crete is located in the Mediterranean Sea.

The video above shows why scuba divers flock to this beautiful diving spot in all of the Greek Islands.

The cave when it was discovered in 1999, it contained bones of elephants that were dated back to 50k years ago!

The dark and eerie appearance of this underwater cave is challenging experienced scuba divers.

Obviously, the Great Barrier in Queensland, Australia is the largest scuba diving place in the whole world.

The whopping 2300 km length f the Great Barrier Reef surely must have no dearth of best scuba diving in the world.

There are 900 islands and islets all along the Great Barrier Reef teeming with very attractive coral reefs. 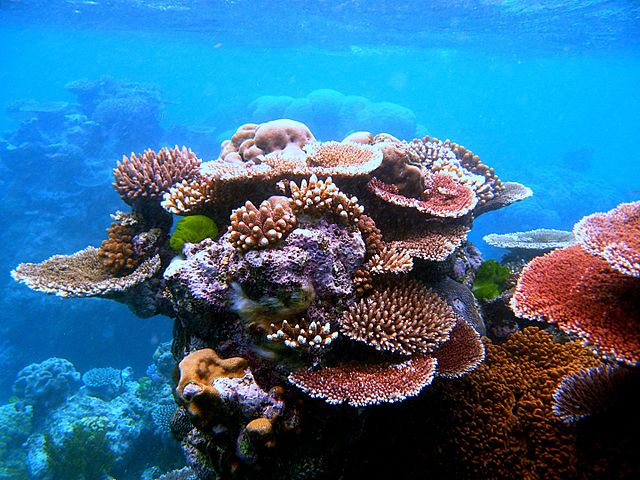 This plus a rich marine life that thrives around these beautiful corals attracts scuba divers from every part of the world.

Scuba diving is an adventure sport that is now gaining popularity even among newbies because of the availability of PADI instructors.

You need not book an appointment with a scuba diving instructor prior to your arrival. Every shop of PADI will have several instructors who would be too willing to take you down the sea at the best scuba diving places in the world.

8 Thrilling Surfing Spots in the World