The 15 Unique Foods from Around the World 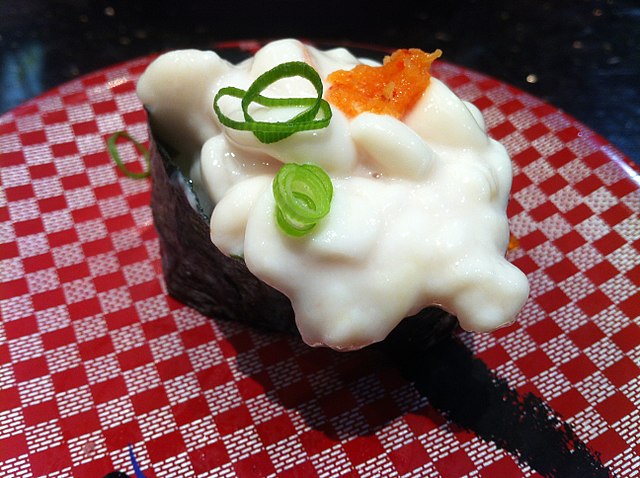 If only we have a list of foods, especially about the unique foods and drinks that we should try in our new tourist destination, it can come in handy-right?

The two most important aspects of traveling are:

As soon as we take care of our stay arrangements in the city of our holiday destination, we then don’t bother much with what to see and to do. We invariably leave that to the hotel travel desk and heed their recommendations. Of course, this doesn’t apply to all of us; planning ahead is not everyone’s cup of tea.

Similarly, we would have no clue as to what to eat and where in the city or small town that we planned to stay during our holiday.

While some help comes from the local taxi driver who takes us through the city and nearby, that information cannot be always reliable. A bit of selfish interest might be the motive for the recommendations of unique foods and drinks.

Please go through my list of unique foods from different cities of different countries. I curated the valuable information based on my extensive reading of highly reputed travel blogs. 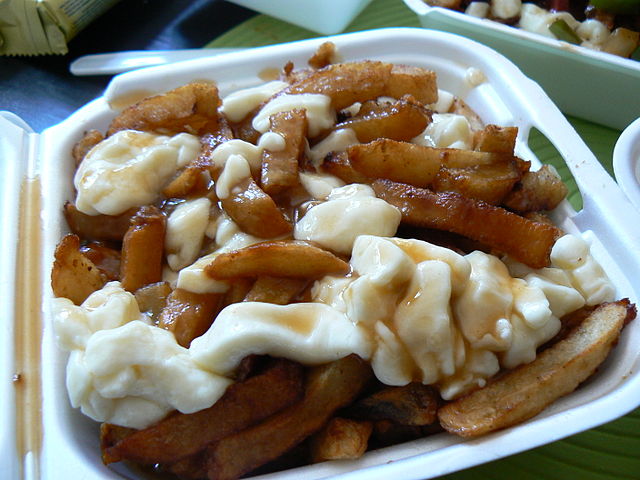 Poutine is a snack and this is loved especially by the children because it is basically “French Fries”.  The uniqueness of the French fries in Quebec, Canada is the cheese curds that are used to dress the French fries.

Do you know what a ‘cheese curd’ is? It is nothing but curdled milk.

In addition, a brown colored sauce is poured on the potato wedges. I hope it won’t be a chocolate sauce, which can spoil the taste of the potatoes. French fries are heavenly only if they are eaten spicy. 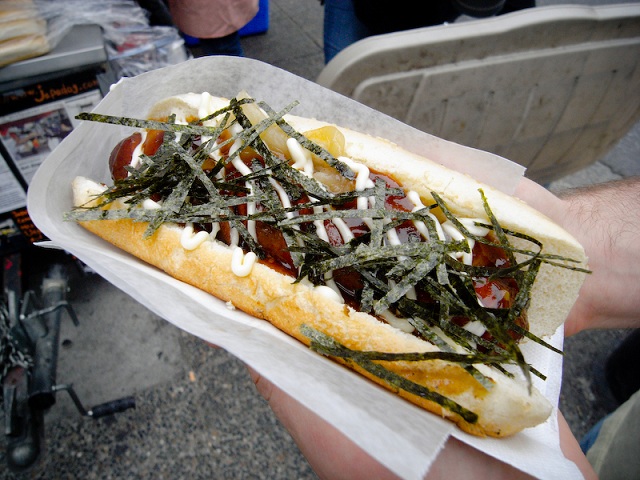 Can you recognize this unique food of Ontario province of Canada? This is a “hot dog”, a very very American snack that has been subjected to phenomenal variations and fusion.

The above version “Terimayo” is a fusion of American and Japanese cuisine.

This unique Canadian hotdog is sold by the popular street food chain called “Japadog”. The name spells it all-eh? The American hot dog, when dressed with a few Japanese ingredients such as bonito, wasabi, the American hot dog transforms into Japanese hot dog also known as ‘Japadog’. 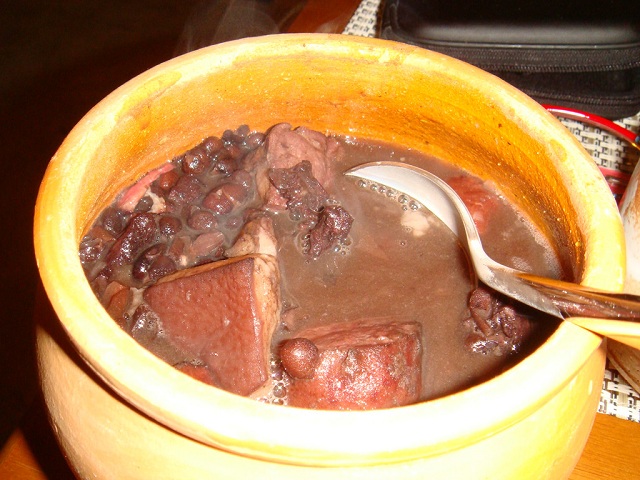 This is not a unique food of Brazil but its national food. Basically, Feijoada is a stew made of beans. Innovations were brought in and now, several countries in Europe, South America are making their own version of Feijoada. I read even in India, this soup is available.

In Brazil, they use black beans as the basic ingredient.

Feijoada is a black-bean stew and it’s a national dish of Brazil. The Brazilians add pieces of boiled pork or beef into the stew.

In India, the feijoada is served with rice but in Brazil, some meat sausage accompanies the Feijoada. 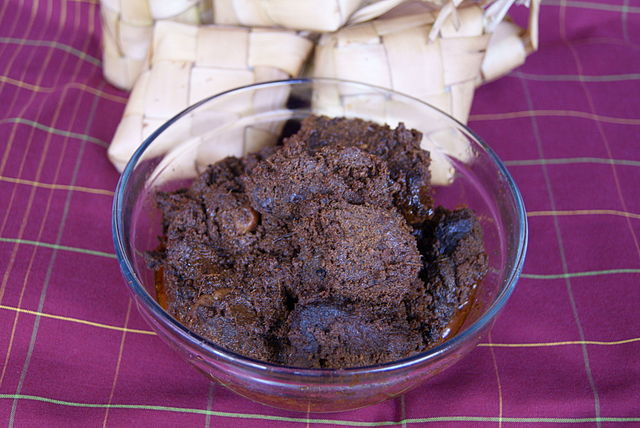 Looks like beef balls to me. The dark color of Rendang can be misleading. I thought it is a chocolate dessert.

But no, this is a very spicy Indonesian National Food. The dark color of the meat is due to marinating the meat with a few rounds of spicy pastes that are culminated with a paste of lemongrass.

Ah, the lemongrass it is which is the reason for the Rendang’s distinct aroma.

In the list of ‘world’s 50 most delicious and unique foods’, the Indonesian Rendang finds a place. 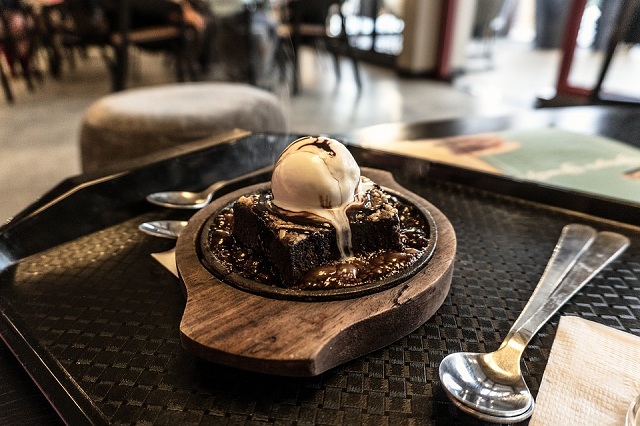 This extraordinary hot ice cream is served on your table as a sort of barbeque. Though it is sold in various Indian cities, the one I tasted was in Bangalore. It was just out of the world, the molten chocolate scoop was unforgettable. If you ever go to Bangalore, try this sizzling brownie in Polar Bear Ice Cream parlor. Polar Bear roams around the Bangalore city.

It’s not a big deal, mate; I mean making of the sizzling brownie can be made in less than 5 minutes using all the readily available ingredients.

Three slices of OTC chocolate cake are taken. On them, sugar syrup is sprinkled. On two of the chocolate cake slices alone, a generous dose of chocolate sauce is spread.

Then, all the three were placed on a heated shallow pan that was bought to your dining table. As soon as they are seated on it, you can see the whole thing started sizzling. Finally, a rather big blob of vanilla cake is placed on top of the chocolate cake slices and some chocolate sauce was squeezed on it from a tube.

That is it. You start eating the sizzling brownie. Try it once; it can be an unforgettable experience.

Piri piri chicken from Mozambique is one of the unique foods to that country to also to entire Africa. 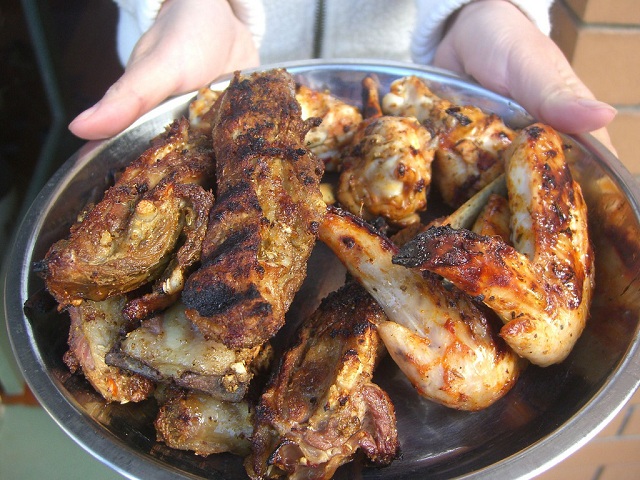 A special chili pepper that is grown exclusively in Mozambique is the main ingredient for this spicy chicken that is served dry. Other popular spices and condiments used to prepare the Piri Piri chicken are black pepper, garlic, lemon juice, and butter.

You can all the ingredients are very basic and common except the green chili pepper that is a special one in Mozambique.

Yes, they the people of the exotic Seychelles Island in the Indian Ocean love ‘bat curry’. For that, they choose the fruit-eating bats only.

Do you have stomach for this unique Seychelles specialty? It is better you know its name so that you know what it is when you see it on the restaurant menu card in Seychelles.

The bat curry of Seychelles is called “Kari Sousouri”

I suppose this Vietnamese noodles specialty is available throughout Vietnam. I used Hanoi above because tourists generally land in the capital city of any country. 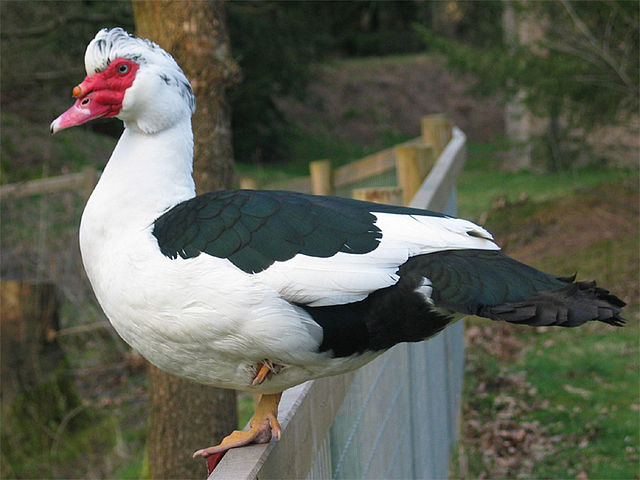 Hmm…, quite a large duck!

In Vietnam, these unique foods prepared everywhere, roadsides, street corners, and cul-de-sacs. People eat sitting, standing, and squatting. It is street food everywhere in Vietnam. Don’t assume street food means they are not to be eaten by every class of customer.

In Vietnamese cities, almost every citizen eats street food only. It seems they don’t cook food at home at all.

Mien Tron is unique to Vietnam because of the use of Muscovy duck. I think the Muscovy ducks are imported in Vietnam. 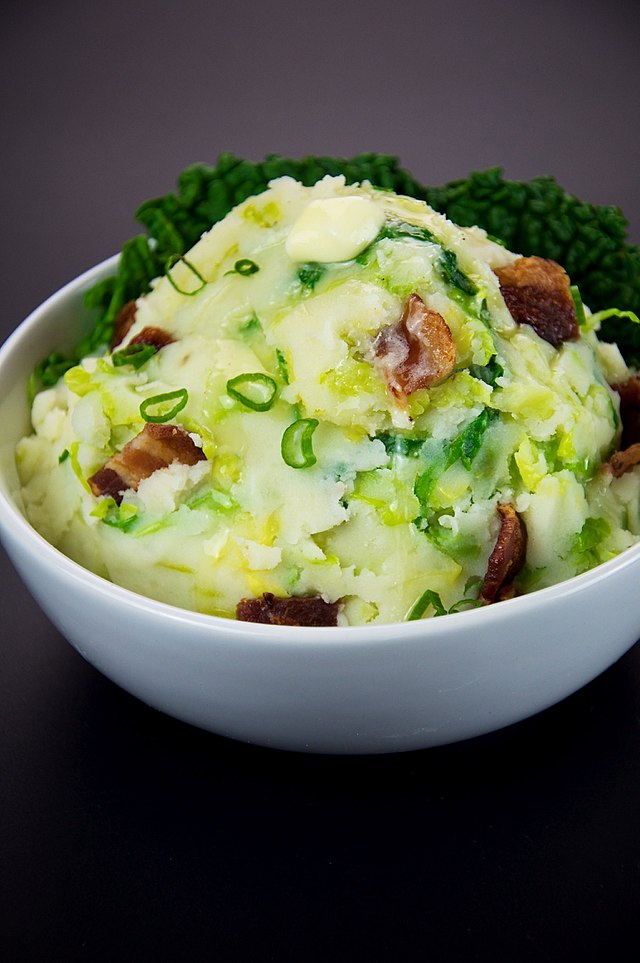 Looks yummy-eh? Colcannon is made of mashed potatoes that are mixed either with kale or cabbage. Oh, what a combination!

If you ever visit Dublin and find Colcannon on the menu card, try it and give your feedback in this blog post’s comment section. I wonder whether this Irish food is spicy or bland because I heard the Irish don’t eat spicily.

This unique South African food is nothing but stuffed bread! Yes, the normal bread is scooped inside out and the resulting hollow is stuffed with meat such as beef, chicken, or lamb. 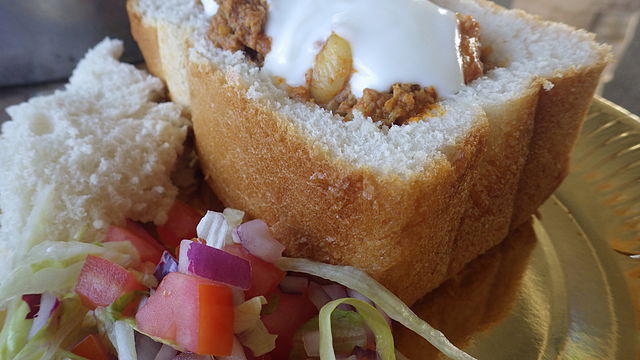 The bread is scooped inside out and waiting to be filled with your choice of meat or vegetable.

If you have turned into a vegetarian, a vegetable filling is an option for you.

It seems to be a fusion of Indian and African recipe.

I think the present Hawaiian cuisine has lost all its native touch and ingredients. Hawaii’s citizens comprise a diverse ethnic group. Native Polynesians were soon outnumbered by migrants from several countries including the far away China and Philippines. This large-scale migration encouraged the Koreans and Japanese also to relocate to Hawaii.

All these diverse nationals brought their own recipe and now I would say the present Hawaiian cuisine is a grand fusion of all these countries’ cuisine.

You can find just every food you know of these countries but still, one or two food items stand out and seems almost unique to Hawaii.

This  semi-Chinese unique foods as the bun is said to be a native of Canton and it is filled with pork!

This Japanese food is not only unique but weird too. In other parts of the world, the Shirako is known as “milt”.

Shirako is the sperm pouch of codfish or anglerfish. Such a strange and unique food item that is originated from Japan later traveled to several countries such as Indonesia, Korea, Italy, and Russia. 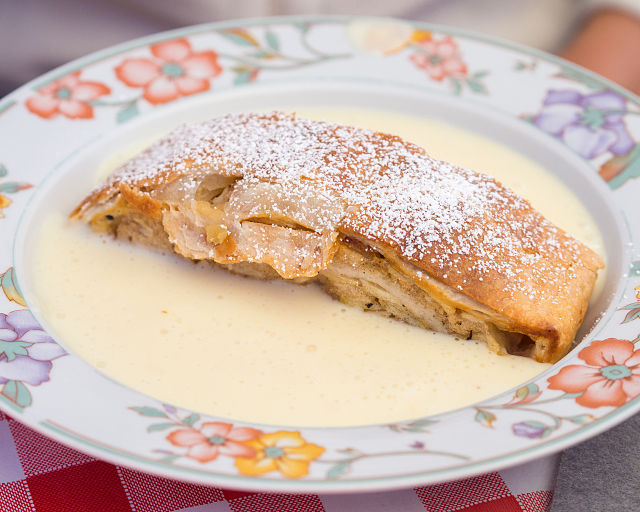 Can you believe it has an apple inside the bun or croissant-whatever you call it? This kind of apple pie is baked only in Austria. Of course, it is a sweet dish and you are supposed to eat it with your evening coffee.

I should have mentioned some dish from Greece in the first ten itself as Greece is a top tourist destination in Europe. I believe it attracts more number of people than France. 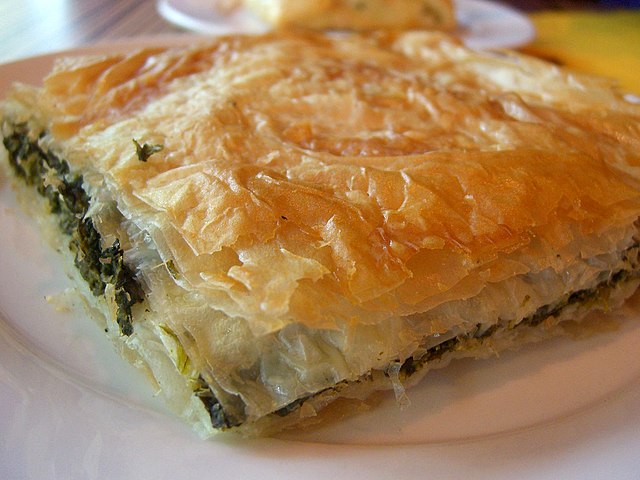 The Greeks call it a spinach pie but to me, it looks like an Indian snack called “puff”

Similar to the puffs in India, the Greek snack Spanakopita laso has several filling that include onion, cheese and sometimes meat.

The Greeks have been eating Spanakopita for 400 years!

Take my word, buddy! The South Africans make this savory snack from Ostrich!

Since Ostrich is not available in abundance, beef is usually replaced. 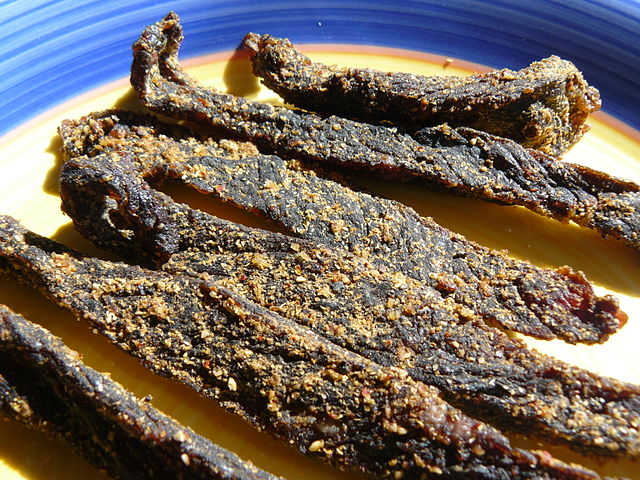 That’s made from beef meat.

9 Beautiful and Scenic Countries in the World