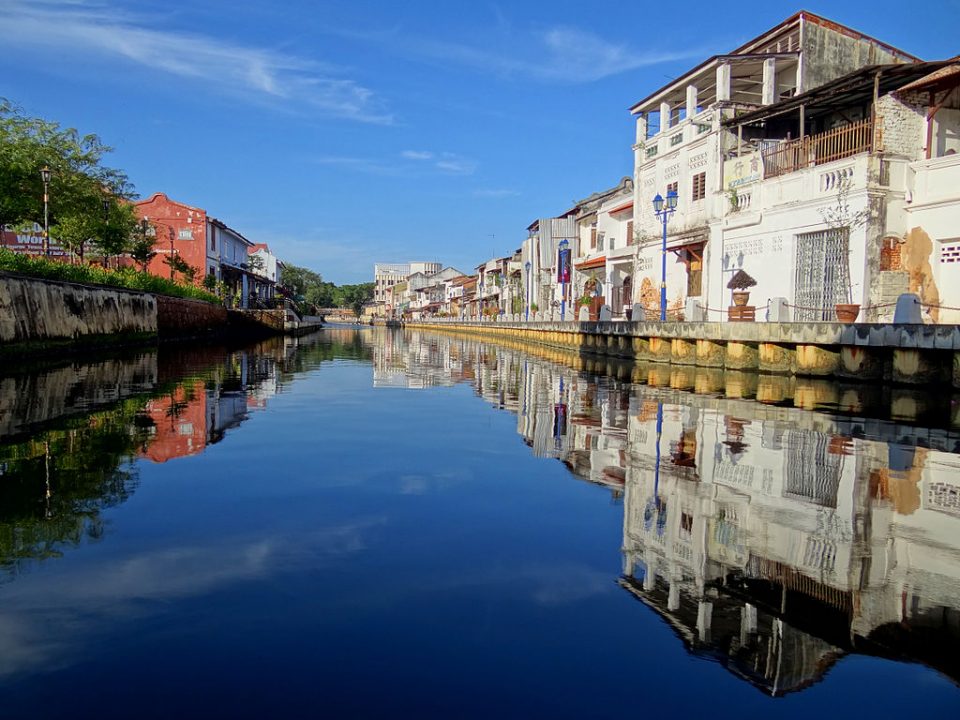 By next month end, one of my relatives would come from Malaysia and settle down in Bangalore. When I visited Singapore last year, he invited me to Malaysia particularly to visit Melaka but I could not go. He even sent a list of places that one should not miss seeing in Malaysia.

Yesterday, I happen to see that list by chance and rued immediately for not accepting his invitation. The list contained some of the places not all the tourists to Malaysia would prefer. I guess he knew my holiday preferences. Malindo Air is a Malaysian premium airline which connects 100 cities in Southeast Asia.

Here are some names of places that he listed: 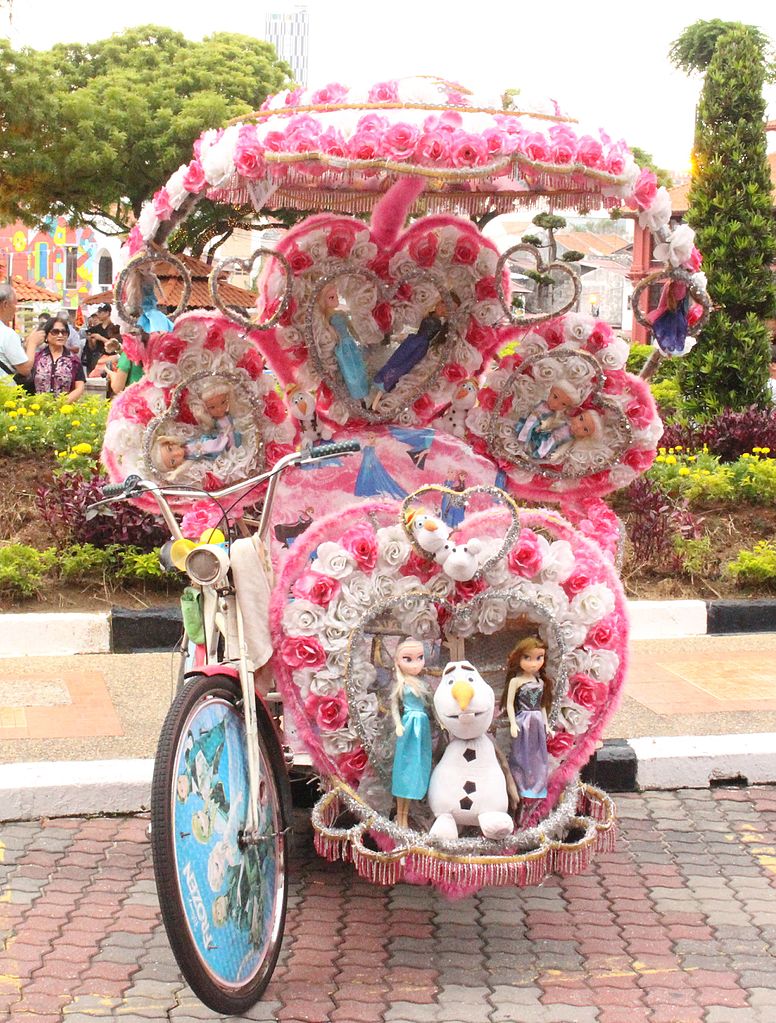 What to Do in Melaka

There are more but their names failed to register in my mind,

Melaka city though now looks modern still retains some of its old architecture including a majestic fort built in 1511. The buildings of noteworthy were built by its previous rulers from Britain, Portuguese and even the Dutch!

Naturally, one can experience a mixed culture in Melaka and I am fascinated by it. Generally, the ancient settlers, if they stay back in the liberated land, contribute a lot to their traditions by following them meticulously. In fact, some of such traditions would not find a place in their native country in the present day.

Look below for example. It is a private local transportation in Melaka and is called ‘Trishaw”. Isn’t it glitzy and elaborately decorated?

When you look at its history, it once was a very busy commercial port that was later won over by the Singapore.

Apart from being a modern city, Melaka has its own forests and agriculture land. Oh, yes, some of the beaches are said to be totally deserted. It’s my kind of destination.

There are two small towns in Melaka. They are Alor Gajah and Ayer Keroh.

Let us now go over the attractions in Malacca(Melaka) City.

A river cruise or a boat ride in any holiday destinations attracts a large crowd and Melaka river cruise is certainly no exception. The river cruise must have started about 40 years ago only. Prior to that, it was a commercial waterway serving the traders from China, Portuguese and the Dutch.

The river cuts across the main city and hence, you can see the commercial buildings and brightly painted residences as you cruise along for about 45 minutes. The guide will point out to the ‘kampungs’-the villages that house the real native people. Ask for the Quay side and you will find the ‘Muara Jetty’ from where the boat starts. 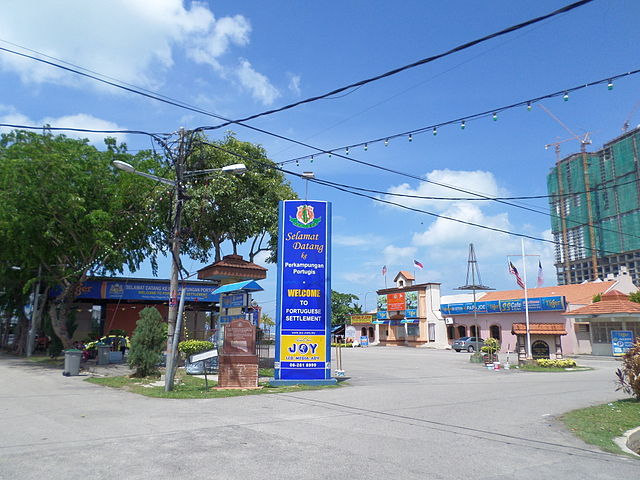 Similar to the ‘China Town’ in Singapore, the Portuguese town here is also called as Portuguese Square and ‘Mini Lisbon’. It is where the majority of the early Portuguese families live.  Now, after 4 centuries of living in Malaysia, the race is now a mixture of Portuguese and Malays.

Occasionally, the Portuguese perform the native dances accompanied by some enchanting music.  A notice board at the center of the settlement announces the cultural events. The place offers a view of the sunset over the Straits of Melaka. 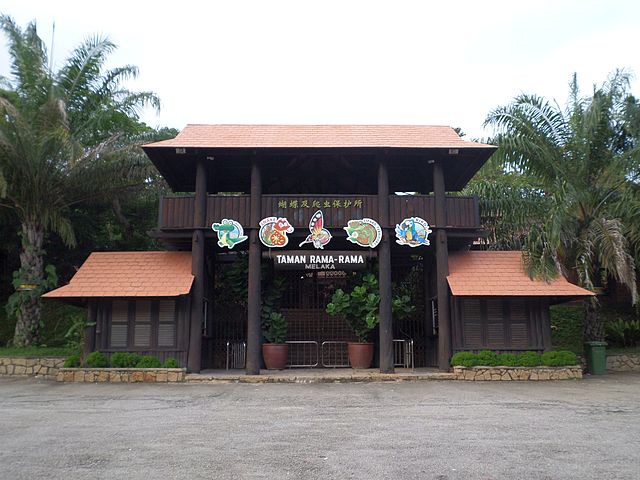 One of the smaller towns, the Ayer Keroh is where the Melaka zoo is located. It is about 13 kilometers from Melaka. It is the second largest zoo in Malaysia comprising of over 50 acres! Of the 1000 odd animals in the zoo, the major attractions are the Malayan Tiger, the Serow, and the Malayan Gaur. 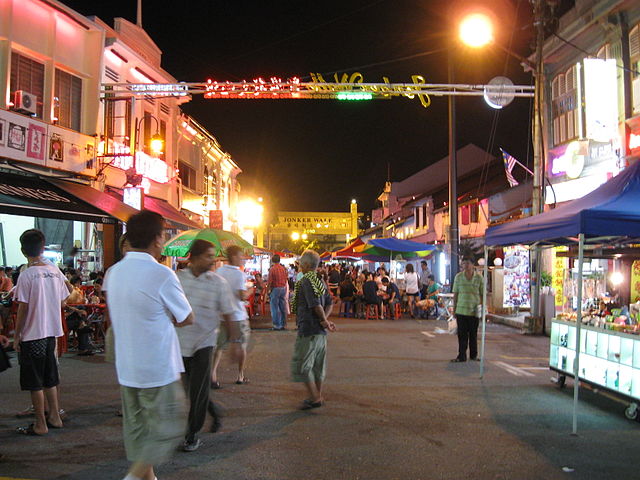 This is a big crowd pulling street because of numerous shops that sell paraphernalia of relics and collectibles. Some of the antiques belong to a few centuries old. The street is made into a ‘pedestrian-only’ area on every weekend including the Friday. 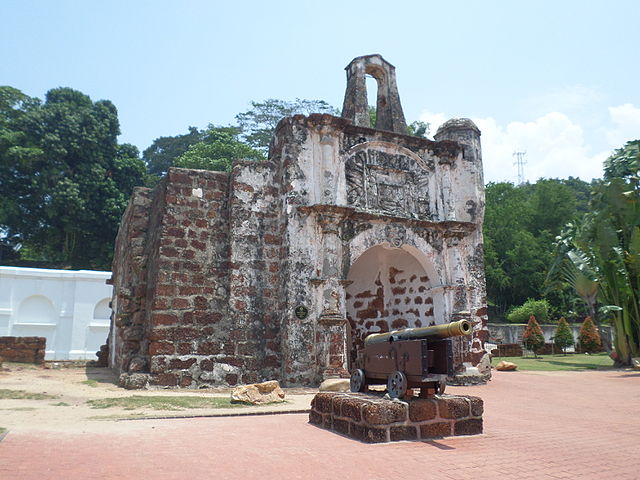 It is a fort and is really very old building built by the Portuguese.  It is located on a hill overlooking the sea. The fort serves as a protective place from other European nations. As feared, the Dutch took it over late finally ending at the hands of the British. 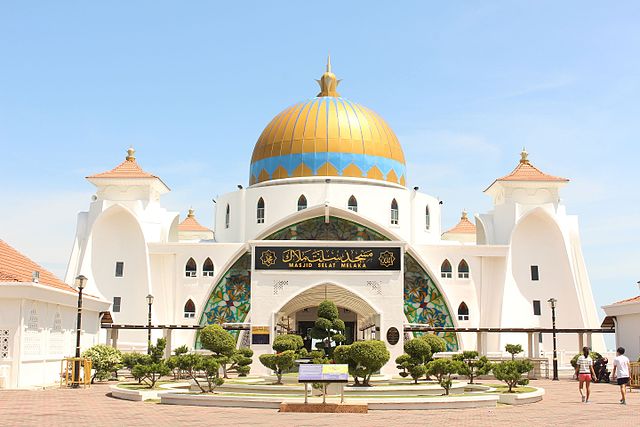 The uniqueness of this Moorish style mosque is, it is designed in such a way that it appears to be floating in the water whenever the water level rises.  It is built on the shores of an artificial island called Melaka Island. It is brightly lit with colored lights and hence attracts visitors after the sunset. 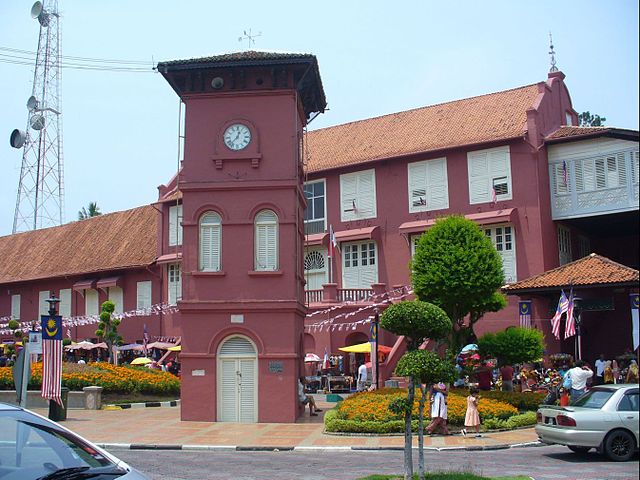 We have already seen a Portuguese settlement at the Portuguese square. This is a Dutch town painted in red. I read that most of the old Dutch buildings are painted red. I wonder why! Even the beautiful Christ Church is in red.

After changing hands with the British, it now houses the History and Ethnography museum in which a fair amount of old Melakan historical costumes and relics are housed.

Similar to revolving tower in Sentosa Island, Singapore, this one is a popular tourist attraction. Seven minutes from the starting point, you reach the top of the tower from where you can enjoy a breathtaking view of the Malaysian island. The area surrounding the tower offers several entertainment activities such as horseback rides and few other electronic rides. 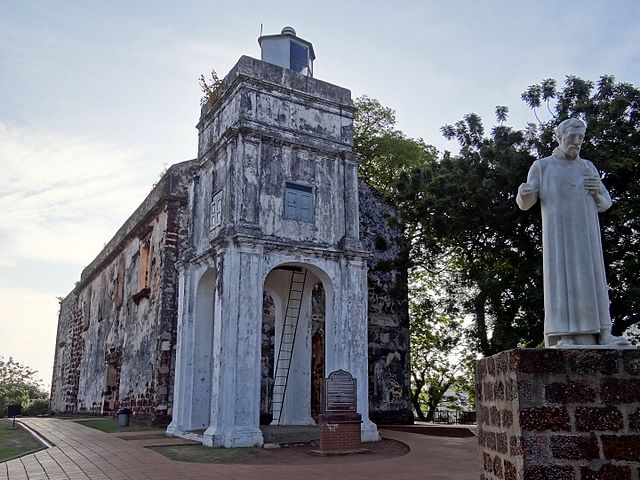 Have you heard of the famous Christian missionary St. Francis Xavier? After his death in China in 1552, his mortal remains were housed here in Melaka for some months before relocating to Goa, India.

Butterfly & Reptile Sanctuary is obviously a big tourist attraction. It is located in one of the smaller towns named Ayer Keroh. It is about 15 minutes drive from Malacca city. This park is also known as ‘Taman Rama Rama’.

What you can see in Melaka Sanctuary?

The butterfly section is obviously more crowded and very few tourists gaze at the snakes and the crocodiles.

Pirate Adventure theme park in Melaka is supposed the latest attraction. It is yet to gain popularity.

The food in Melaka is predominantly sea creates based and of course, the Chinese food is liberally available.

Poland: Eastern Europe on a Budget