12 Asian Street Food That You Must Know 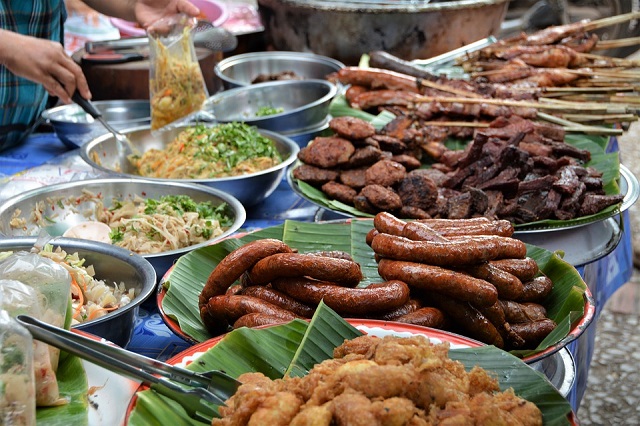 Wherever we go on a vacation, whether it is within our own country or a Asian country, we have the habit of learning about the local cuisine like Asian street food well before we depart-right?

Additionally, it is advisable to know about the street foods of the city or the country of our intended visit. In all probability, the street foods taste much better than the food we eat in the restaurants.

Moreover, the street foods of any place speak the local culture, available ingredients such as vegetables, fruits, spices, and oil.

Eating the street foods of any country is the actual travel experience that we should gain. In addition, street foods save us considerable money while traveling.

In this blog post, I will tell you numerous Asian street food from various Asian cities. When you visit them, be sure to try the local delicacies from the street vendors. 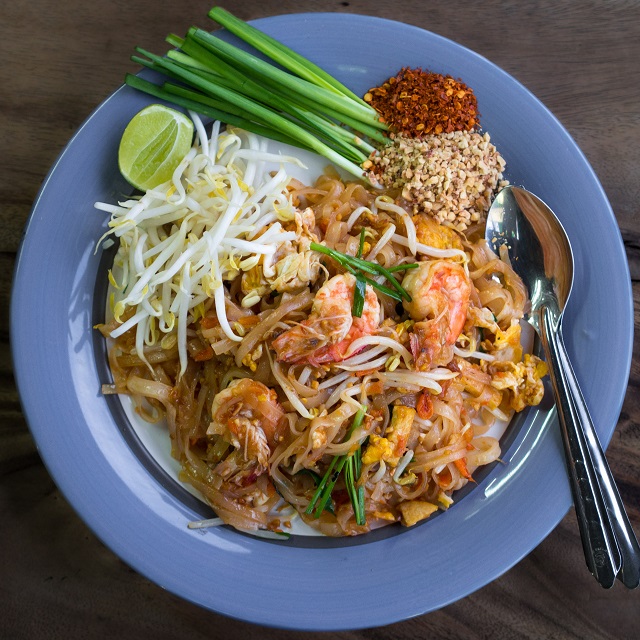 Hmm… let me see what it contains. I could detect spring onion, grated radish, noodles of course which seems to be the basic stuff, a slice of lemon, broken pieces of peanuts, and some meat chunks.

Pad Thai is a street food that you can eat wherever you travel in Thailand. The Pad Thai,  ubiquitously found on the streets of Thai cities, towns, and villages.

Apart from whatever I mentioned above, Pad Thai is sprinkled with fish sauce liberally. Even the meat (chicken, beef, or pork) in Pad Thai is marinated in a fish gravy.

Tamarind juice also mixed prior to tossing in the pan. Finally, vinegar spread over the hot dish.

Interestingly, the noodles served in Thailand and Hong Kong made of rice!

Pad Thai is the most widely-eaten Asian street food in Thailand and its islands numbering 1430! Its popularity is so much that Pad Thai is now the number one street food of Asia. 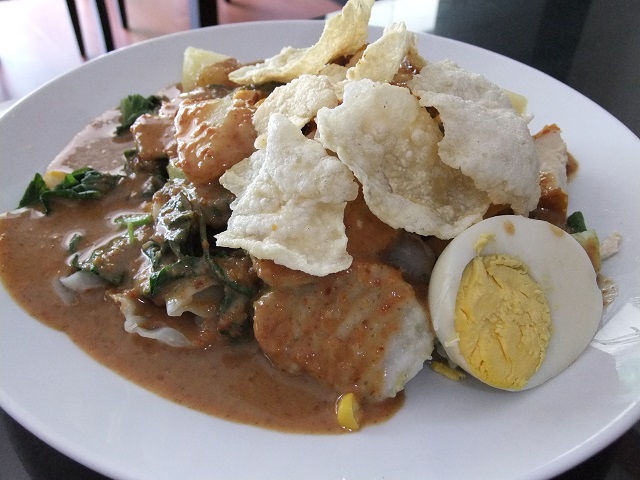 Indonesia, a widely traveled country, and Bali a main tourist attraction. The Asian street food of Indonesia closely resembles Malay cuisine with a touch of the South Indian style of cooking.

Gado Gado is basically an egg salad. Boiled eggs and boiled vegetables including potato and tempeh are the other main ingredients of Gado Gado, a must-try street food of Asia.

I learnt fish (tofu) is also added to Gado Gado. I wonder how fish and eggs can go together.

The later day addition is ‘longtong’, a sort of boiled rice dish wrapped around a banana leaf.

Gado Gado is one of the national foods of Indonesia.

Well, you saw how that young girl gobbled up the whole poori filled with tangy juice and some solid potato! That’s ‘pani poori’ India’s hottest street food (but served cold).

Pani poori in India and, also known as ‘gol goppa’.

In spite of being a highly eaten street food everywhere in India, strangely, it has not crossed the Indian borders.

The poori also spelled ‘puri’ in north India whereas ‘poori’ is a south Indian word.

Inside the fluffy poori, some mashed potato and chickpeas are added before the street vendor fills it with the green tangy water made of tamarind and mint.

Don’t forget to eat this street food in Asia when you visit any city or town in India. The vendors usually set up their portable stall in the evening, after 5 pm.

I read it is originated from India but I never saw it on the Indian streets. It must be pre-independence India before the creation of Pakistan.

The Halwa Puri is a weird combination of street food because halwa is a sweet whereas puri is a savory! 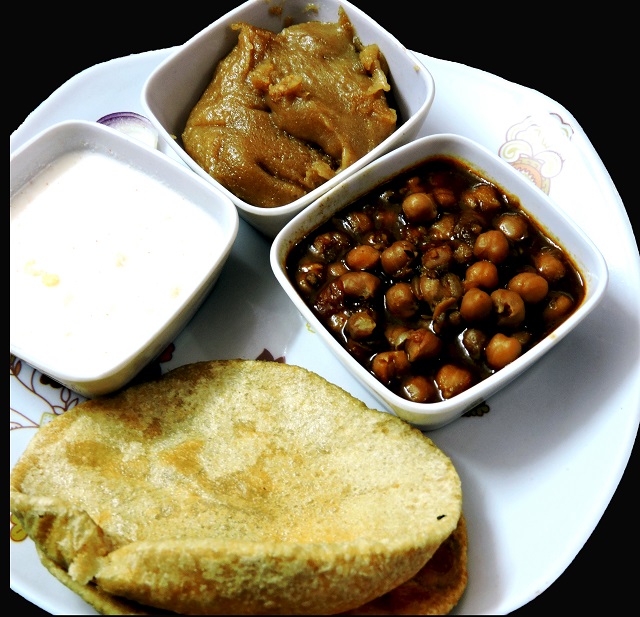 The regular puri served with either chickpea gravy or potato gravy. It is oddly accompanied by the halwa made from wheat.

Halwa Puri a Asian street food served as breakfast in the streets of Lahore and Karachi, Pakistan. 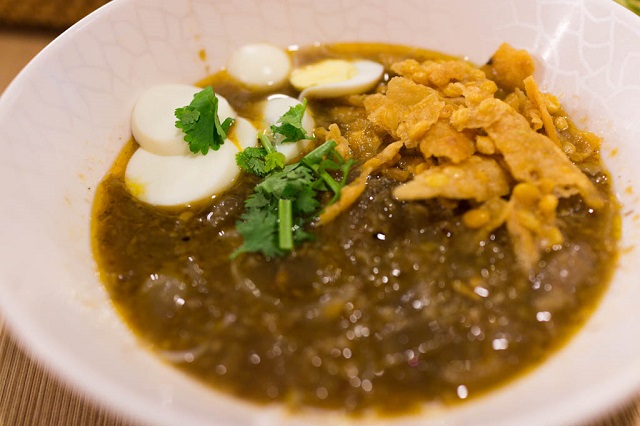 Burmese cuisine is rather unique. That’s how I see it. Surrounded by India, Pakistan, China, Nepal, Bangladesh, and Tibet, the Burmese stay uninfluenced by the cuisines of its neighbor.

Mohinga is one of the famous street food of Myanmar apart from the Indian samosa, dumpling, and dosa.

Mohinga, more like a soup mixed with noodles and boiled eggs. Though Mohinga supposed to be a breakfast dish, now eaten throughout the day by the Burmese.

Here is a Mohinga mobile stall in Myanmar. 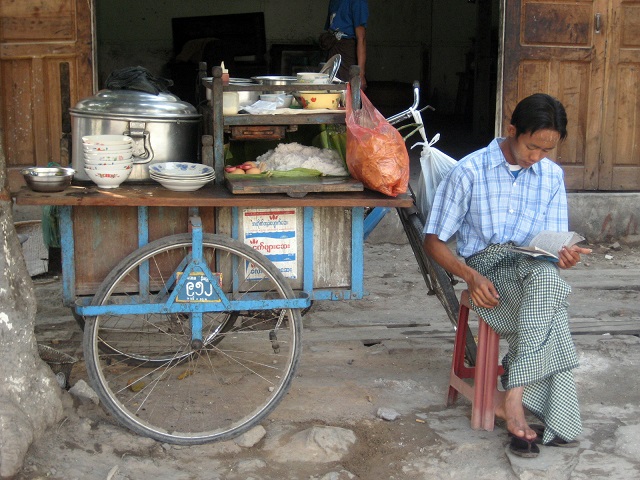 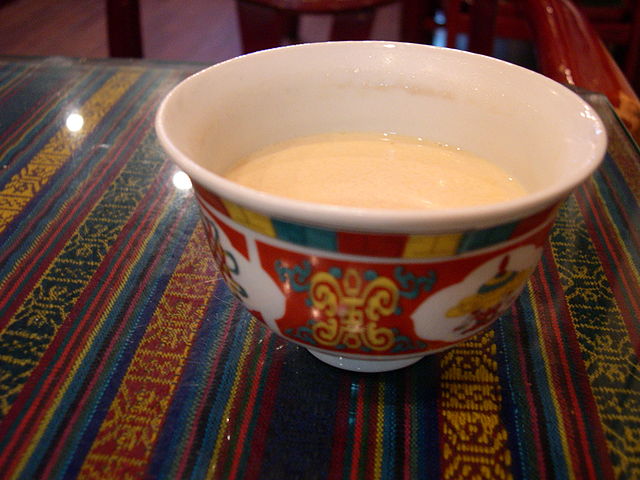 The Butter tea! Have you ever heard of it? Not me too.

Well, it is the usual tea that we all make but the specialty of butter tea is that it contains ‘yak’ butter! Incredible!

Butter derived from yak’s milk is certainly a unique food in the world-eh?

Here is another shock! Instead of sugar, salt added to the butter tea.

In order to drink this unheard-of street food, you need not take the trouble of going to Tibet. Alternatively, it sold as a street beverage in Sikkim and Arunachal Pradesh.

Lurou Fan is a street food mainly consisting of rice and ham. It is eaten all over Taiwan to the extent that it is a national food of Taiwan. 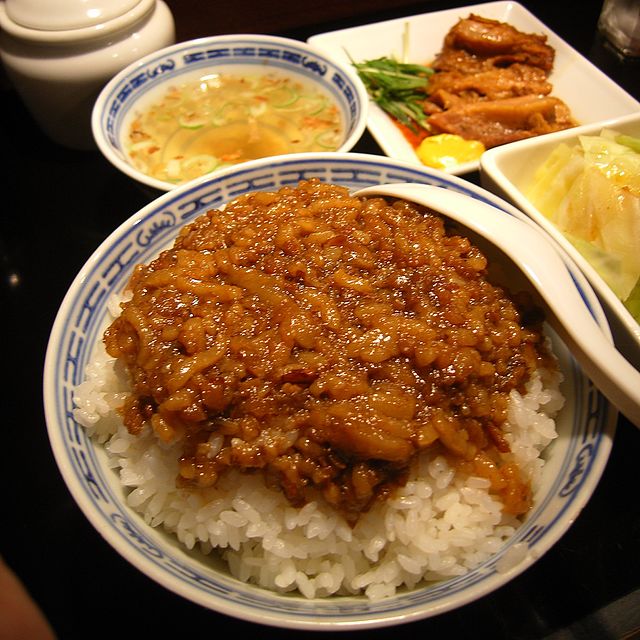 Pork marinated in soy sauce before cooking to perfection. The meat, then served with a bowl of boiled rice, garnished the rings of onion. 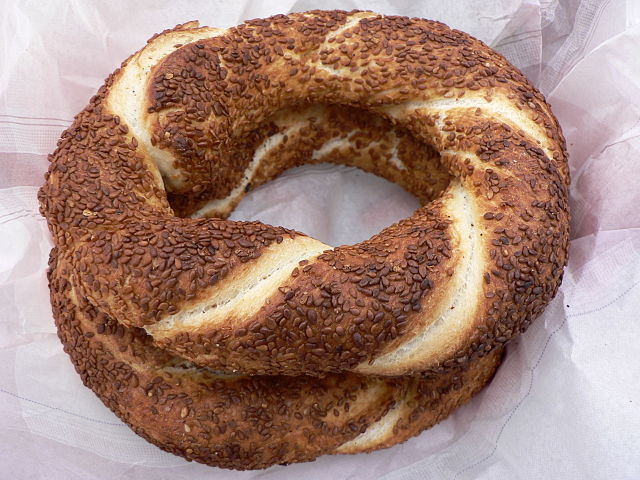 Turkey is a big touristy nation. The majority of the western holidaymakers are not aware of the numerous tourist landmarks in Istanbul.

Turkey is a beautiful country with so many things to do among which eating their street food is really an experience.

The choice of Turkish street food is too many. It is tough to rate one among them. However, Simit scores the highest mark because it is eaten very widely by the Turks.

It is a doughnut with exotic ingredients such as molasses and flax or sesame seeds.  The outer crust is crispy.

Simit has several alternative names throughout Turkey with variations in its size and taste.

When you visit Istanbul, sink your teeth in a simit. In addition, buy a few and bring back home as a gift to your neighbors. 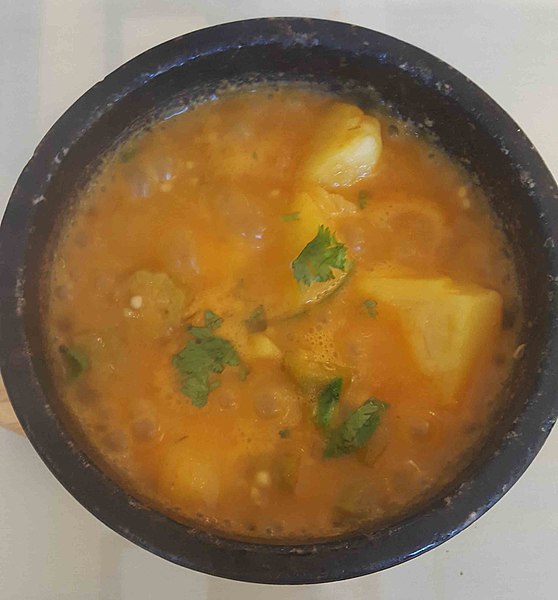 Saltah in Yemen eaten before lunch in cafes. However, for the poor, it is all for their lunch. They buy it from street-food kiosks. If they can afford, they buy a flatbread called ‘roti’, or layered flatbread known as ‘parotta’.

Saltah eaten with one or two roti makes a filling lunch for the poor or the rich.

Saltah is distinctly aromatic by the addition of liberal quantities of fenugreek.

Lamb chunks found floating in Saltah and they priced higher. Additionally, you can ask for one or two boiled eggs.

If lamb and egg don’t go well, replace either one with boiled potatoes. Yemeni tomatoes that are said to be pulpy and juicey and ground green chilies are combined to make a paste and mixed with the stew called ‘Saltah’.

Amazing; these street foods from Asia-eh? 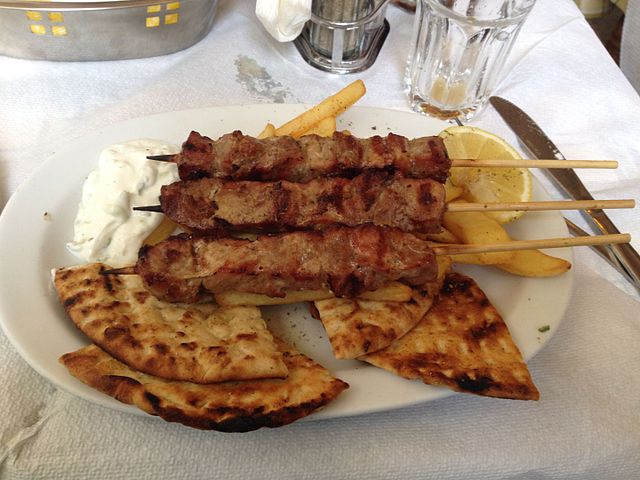 Ah, Cyprus-the the evergreen Mediterranean island that is a big holiday destination among the eastern and southern Europeans.

The Souvlaki, a widely eaten street food by the people of Cyprus who are otherwise called Cypriots.

As the image of Souvlaki indicates, it is a skewer made of grilled meat. The meat is usually pork but these days, chicken and lamb meat are also skewed on popular demand.

After removing from fire, lime juice sprinkled on the street food to enhance the taste. Barbequed foods taste good by the addition of lemon juice.

This is just a sample, boss; the Cyprus streets offer a great variety of foods cooked right on the street and right in front of you. 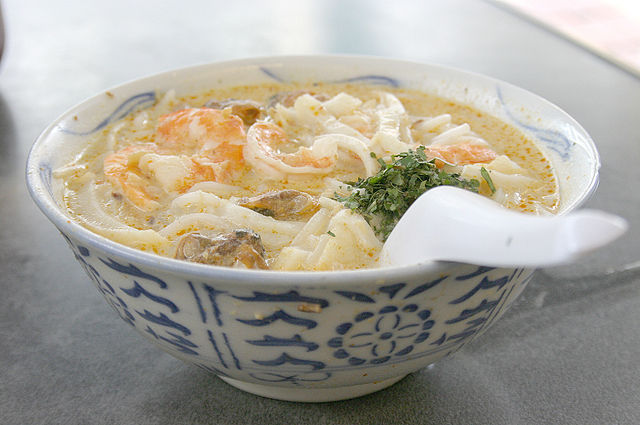 What I saw in Singapore made me conclude that all the foods that the local people, as well as the tourists eat, are only from roadside restaurants that invariably serve beer also.

Every street where the tourists stay lined with several cafes, mostly small but with seating arrangements.

The smell of seafood is overwhelming in Singapore. They simply love to eat noodles three times a day along with crab and fish.

Laksa is a sort of soup and noodles. (soupy noodles?). Floating in the bowl will be fish or crab meat. The aroma is rather heavy due to the addition of a fish sauce.

In the image above, the white color is due to the coconut milk base.

Here is the usual Laksa with brown color due to the tamarind juice base. 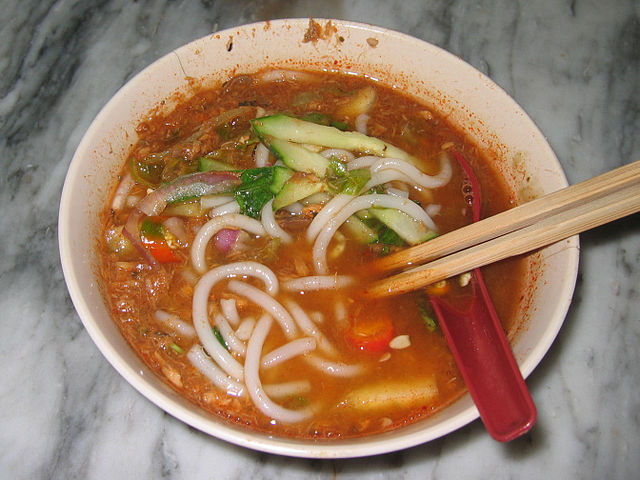 Throughout South East Asia, Laksa found in different avatars thus making it the highly eaten Asian street food in this part of Asia. 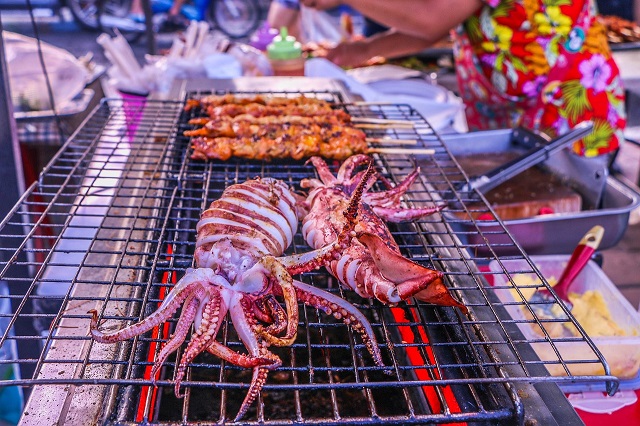 No, there are no equals to the street food of Cambodia. I am sure, you cannot compare any of the Cambodian food with any other street foods of Asia including its neighboring countries such as Laos and Vietnam.

Tell me, where did you eat more giant squids in the world than on the streets of Cambodia?

Treat this blog post as a kind of ready reckoner for the best of Asian street food.

Things to Do in Lake Mead National Recreation Area

I’m a huge fan of streetfood, would love to try as much as possible :).. I do like the eastern streetfood culture as opposed to the west, so much of variety. Halwa puri does sound very weird though, not sure how I would feel to try 😀

20 Plus Exotic Indonesian Foods You Must...