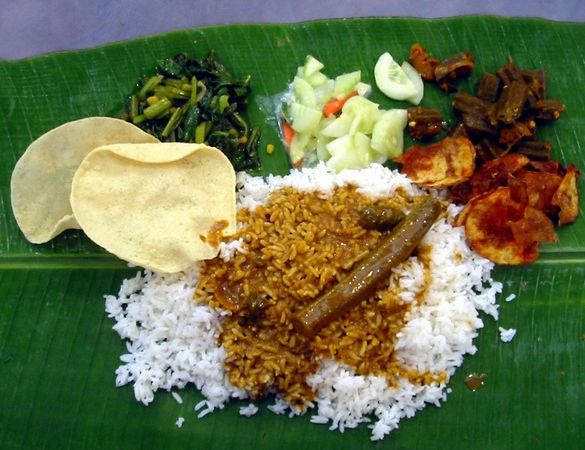 I was not actually ready to write a review of Thali Meal served in different states of India.  Yesterday, I was treated to an extraordinary vegetarian meal in Bangalore that I am forced to compare it with similar kind of lunch served in a thali (plate) made of different metals such as brass, silver, copper and stainless steel.

I went to a restaurant called ‘Kesaria’ in JP Nagar, Bangalore, yesterday.  The thali was of silver and so as all other cutleries. The food was amazing and the service was just too good. As soon as we all (6 people) seated, they started serving the starters. In India, the appetizer is called a starter. I think it is very apt to call the small quantities of different dishes as ‘starters’. The waiter explained every dish before serving.

In India, the Thali Meal as the lunch is called varies quite a lot from state to state. It is because of using different spices and the way some food items are cooked.

For example, in North India, the flatbread called ‘roti’ is cooked mostly on a coal-fired clay oven. The same food called as ‘chappati’ in Western India such as Mumbai is made on a tava (iron plate) placed on a gas stove.

In deep-south India, either chappati or poori is served along with other dishes.  In most of the South Indian cities, the thali meal is vegetarian.

Let us now look at the plate (thali) meals served in different cities of India.

Why people of India eat Thali Meal instead of ordering individual items?

The Indians are wise by eating Thali Meal because the menu card contains so many items that would make even a very quick decision maker like me confused as to what to choose. In thali meals, the choice is done for you and you are given small quantities of several items mentioned in the menu. Therefore, the easiest way to taste several foods that are too diverse for one to choose from a bulky menu card is to opt for the regional thali.

After tasting the thali lunch in different restaurants in Bangalore, the capital of Karnataka state, I must conclude that the food is quite balanced. Instead of roti or chappati made of whole wheat, you are served roti made of corn. It’s a Karnataka specialty. Moreover, they add jaggery (Palm sugar) in most of the dishes. 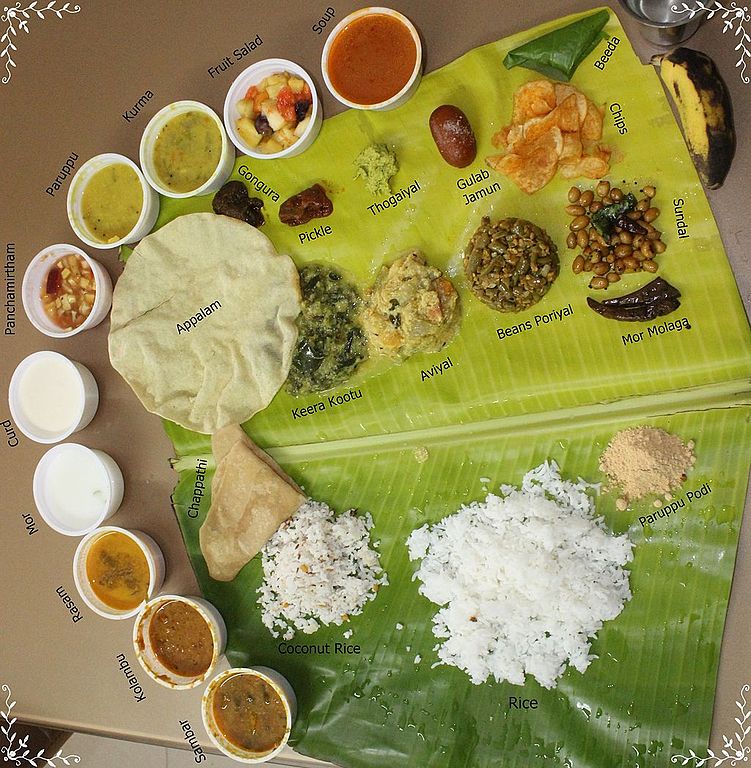 Chennai, the capital city of Tamilnadu state is the best city in India to eat high-quality and authentic South Indian vegetarian thali meal. A few decades ago, the thali meal was served without the north Indian roti. Only rice was served with the usual sambar, rasam, poriyal, kootu, appalam, and pickle. The city of Chennai is now truly a cosmopolitan city and there is a generous mixture of people from all states of India. So, the rotis have started finding their way in the thali. 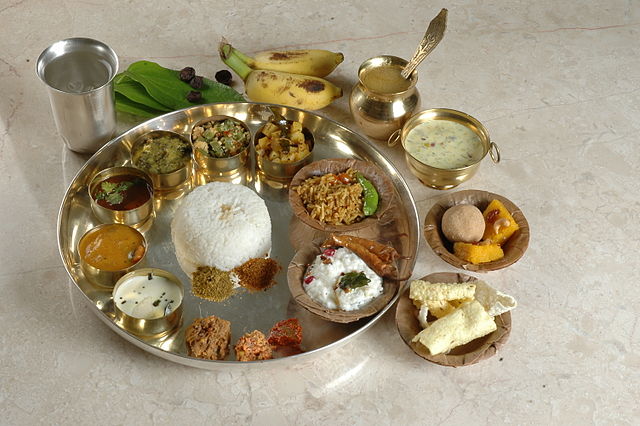 The Andhra Pradesh thali lunch (even dinner too) always starts with a generous dose of ghee poured on a mound of white rice and mixed with lentil powder (paruppu podi). You can also inevitably find the gongura (aamelli) chutney.  Their starter is unique; anyone vegetable that includes bitter guard or lady’s finger is crisp fried and served. It’s a delicious appetizer. Garlic will be present in most of the dishes. 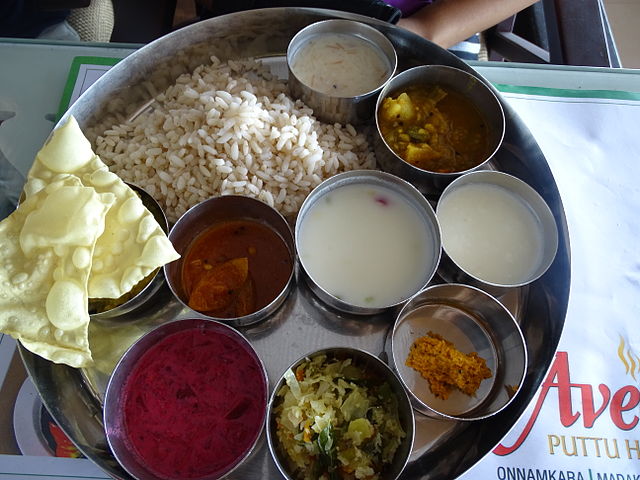 The white rice in their Thali Meal will be big and difficult to chew. You are also offered a choice of asking for red rice. The coconut is a predominant ingredient in Kerala cuisine. The thali will definitely have space for either pappadam or nenthrankai (a type of banana) chips. Because of a long coastline, the Kerala thali meal is known to contain fish or crab.

The Mumbai thali is totally different from the Thali Meal described thus far. Even in the southern cities mentioned above, they offer two kinds of meals; either South Indian or Bombay meals. Yes, anything that lies north of South India is called as Bombay (earlier name of present Mumbai) by them. 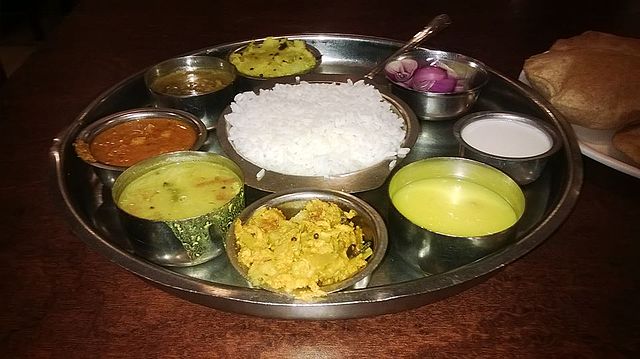 In Mumbai thali, mostly 4 small sized pooris will be served accompanied by several small cups that contain dhal, a dry and a gravy side-dish, green salad with lemon and green chili, and curd. Rice will also be served but in a slightly bigger cup. 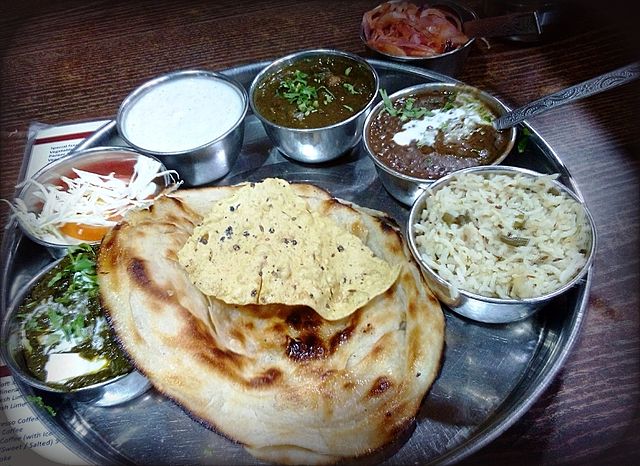 The roti that is served first in Punjabi thali will be thick that is cooked in a coal-fired oven. The thick Punjabi rotis are dipped in either a vegetarian or non-vegetarian gravy dish. The non-vegetarian item will be invariably butter chicken. Potato and paneer are the two main ingredients in the vegetarian dishes.

They end their lunch with a tall glass of ‘lassi’-a sweetened curd that this topped with cream and crystal sugar. The Punjabi thali will be invariably made of brass. 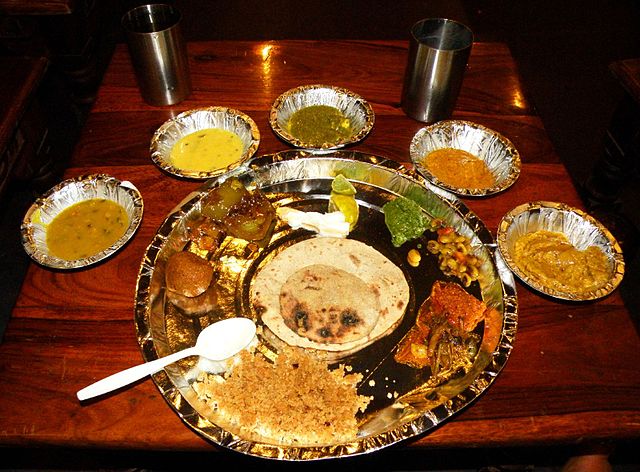 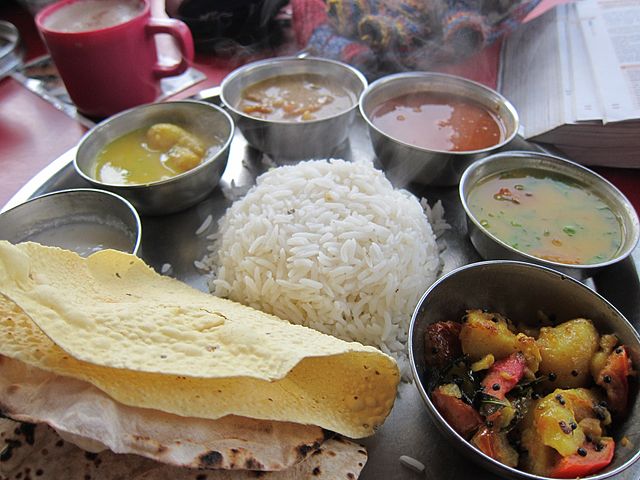 The Bengal is are fond of fish and they consider it as a vegetarian food item. They cook the vegetarian and the meat very differently. Their use of mustard oil as the medium of cooking may not agree with most of the Indians from other states. The Bengali thali is sure to contain a cup of Rosogulla, the ubiquitous sweet found in Calcutta street corners.

Not much is talked about the cuisine in this part of India because there is nothing unique about their food. I have tasted their thali meal once; I found they use dry mango powder in most of their preparations.

Panch phoron is a blend of five spices that is widely used in rural Orissa.  The five spices are: 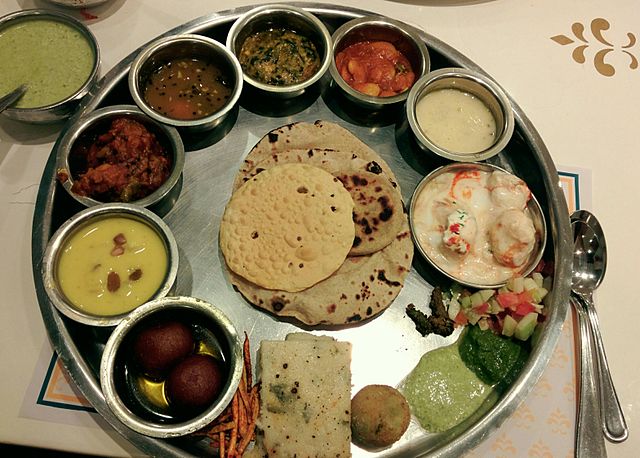 Predominantly vegetarian food is eaten in Gujarat. Their special dish is the ‘Dhokla’ made of besan batter. While eating roti, the Gujaratis dip each piece of roti in a liquid called ‘Khadi’ which has buttermilk as the base.

Indian Restaurants in Austin, from Traditional to...