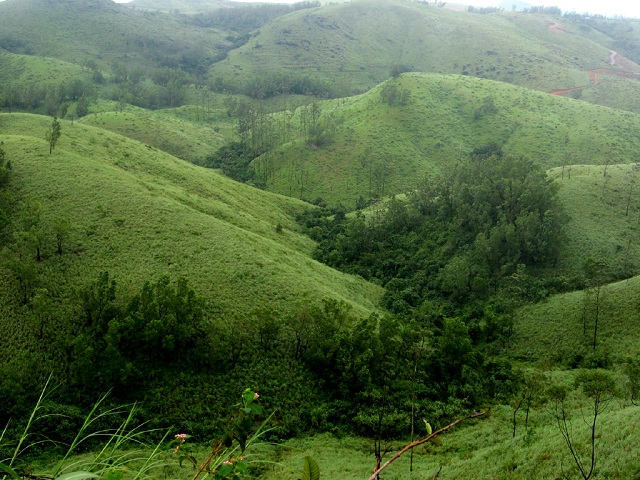 There are as many as 15 scenic and evergreen hill stations of Kerala. Lakkidi is one of them and is a rather little known and less visited Malabar hill station.

Kerala instantly evokes pleasant memories to those who had been to Kerala at least once in their lifetime.

For others who only have been reading about Kerala’s green environs, would be able to recollect the various images of Kerala that include:

Kerala’s geography lures us with all these picturesque places, especially the hill stations that are contrastingly cool when compared to the steamy conditions of the backwaters and seaside.

If you consider Munnar as a sample, there are 15 other similar hill stations in Kerala where you can spend your weekend with your family or friends.

Let us pay a visit to Lakkidi Hill Station, one of the all the 15 minor hill stations of Kerala. 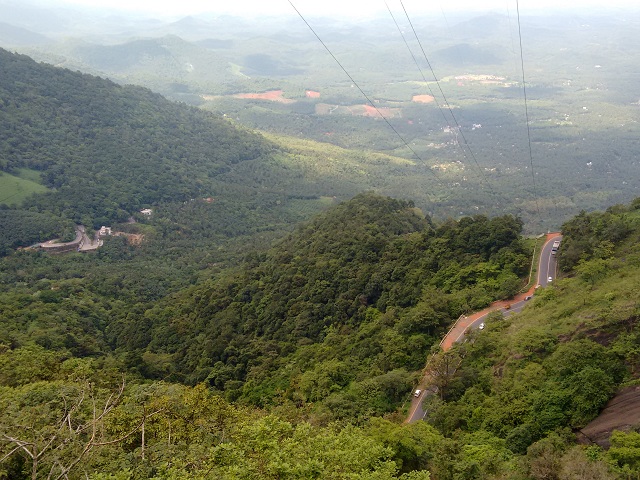 Never heard of this minor hill station of Kerala-right?

The image above of Lakkidi hills should speak volumes of its mist-filled green hills and the chilly weather.

The summit of the Lakkidi hills stands at 3700 feet!

You will see the thick forest on the slopes of the hills interspersed with tea gardens all along up to the peak.

Lakkidi located in Wayanad district of Kerala. If you are impressed with Lakkidi, then, you can expect the entire Wayanad to look the same.

The whole hill station will capture your attention with its green meadows and the winding roads that lead you to the infinite green surface.

What can you see in Lakkidi hill station

The lake, a naturally formed one with rainwater as its only source, and thus, this is a freshwater lake. Pedal boats are offered for the tourists to spend an invigorating time.

Aquarium on the banks of the Pookode lake will make the children scream with joy.

The chain tree is a unique attraction in the Lakkidi Hill Station. Here is a short video clip of the chain tree.

This is a Ficus tree that is chained to the ground. It has a story behind it, making you pay respect to a tribal who resisted the British and was eventually killed by them.

Vaniyamkulam flea market will enthrall the tourists and the locals with its broad range of hill products, herbs, honey, condiments, and strange and unheard of delicious fruits.

You can also witness the ruins of a Chera king called ‘Cheran Perumal.’

River Bharathapuzha river, one of the longest rivers of Kerala and on whose banks, numerous Hindu temples built.

Chinakkathoor Pooram festival at Palappuram town that is situated about 6 km from Lakkidi Hill Town is wonderful sight if you happen to go to Lakkidi hill station between March and April. The festival dedicated to the Goddess Durga. The festival highlight, the procession of Indian elephants adorned with various jewelry.

Other places of attraction in Palappuram town are:

The video of Lakkidi View Point speaks for itself. It reminds me of the ‘Suicide Point’ in Kodaikanal in Tamilnadu.

If you avoid the months between April and July, you can go to Lakkidi hill station at any time of the year.

Nevertheless, if you are a passionate nature lover and like rains on the Western Ghats, you would not hesitate to even during the monsoon that occurs in June and July.

It is the monsoon that attracts several flocks of birds, colorful insects, and lush green bushes with wildflowers. 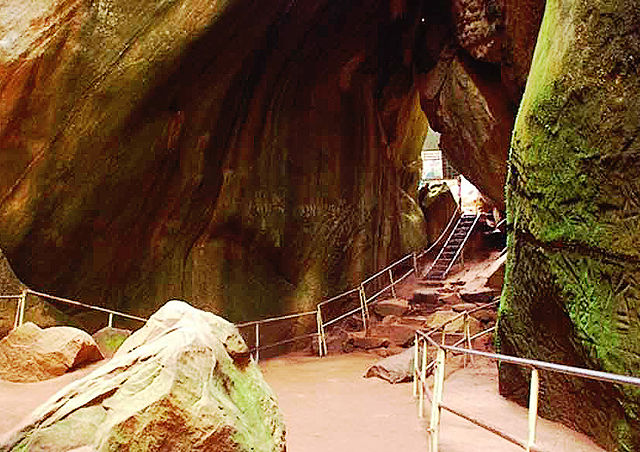 Edakkal Caves are located at about 40 km from Lakkidi hill station. The altitude at which the caves are situated is 3600 feet on the Ambukkutti Malai. On the way to Edakkal Caves lies the celebrated Kalpetta and the Chembara Peak.

Villages and towns near Lakkidi that are worthy of a short trip:

How to go to Lakkidi hill station?

Lakkidi hill station is part of the lovely Wayanad district of Kerala. Lakkidi is the starting point (gateway) of Wayanad-a place of umpteen natural attractions.

The nearest town is Vythiri.  It is only 5 km from Lakkidi.

Any tourist place in Kerala should be reached by road traveling only as the scenic countryside is too beautiful not to miss if you visit by other means of transportation.

So, to go to Lakkidi Hill Station in Kerala, you should know the road distance from several vital cities in Tamilnadu, Kerala, and Karnataka.

The nearest train station is Calicut in Kerala. It lies 70 km from Lakkidi. Please be aware that Calicut has an international airport.

Hotels in and around Lakkidi:

Lakkidi, though loaded with breathtaking natural beauties, is still a small hill station that doesn’t attract too many tourists. Hence, the staying options are not many in this hill station.

However, the nearby popular hill stations such as Kalpeta, Vythri, and the Shoranur town offer plenty of resorts and hotels to stay and visit Lakkidi as a day trip.

There is an excellent wellness resort in Vythri forest.

Being an exquisite hill station covered by dense forests, one can expect to see several trekking trails.

Well, you are visiting the lap of the mighty Western Ghats, the irresistible abode to some extraordinary wildlife, especially birds.

You can spot the following birds in Lakkidi hill station: 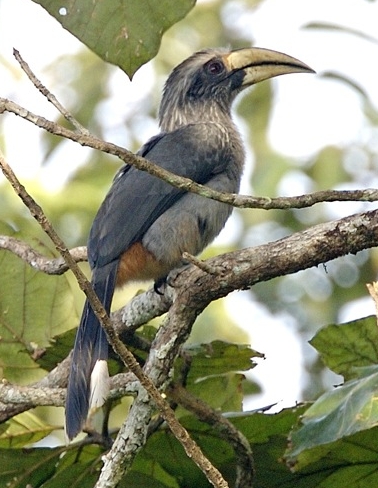 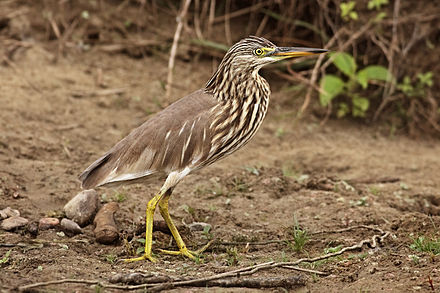 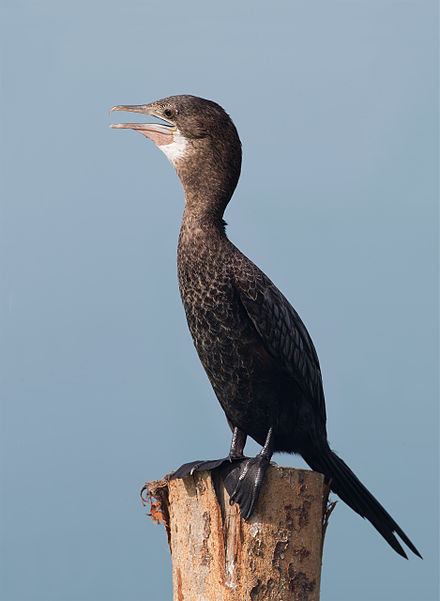 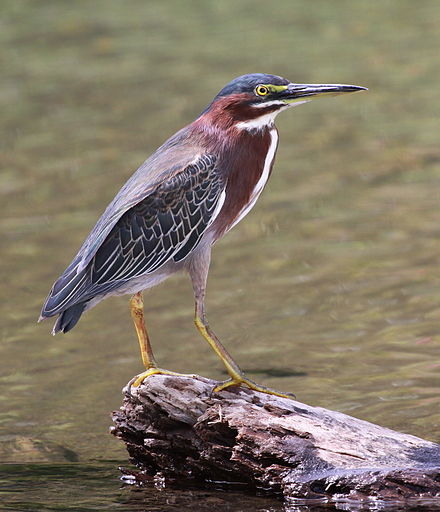 Malabar cuisine,  the predominant food served in the restaurants in all the hill stations of Kerala. Puttu and Kadalai Curry for breakfast, rice, and kozhi (chicken) kuzhambu (gravy) for lunch and dinner, appam, and coconut milk accompanied by a long Nentram Pazaham (local banana) are the traditional food you can eat during your trip to Lakkidi Hill Station.

What can you shop in Lakkidi Hill Station:

Buy packets of tea and coffee cultivated in the Western Ghats. You can also buy cardamom and cinnamon spices.

9 Best Caribbean Islands to Visit in...